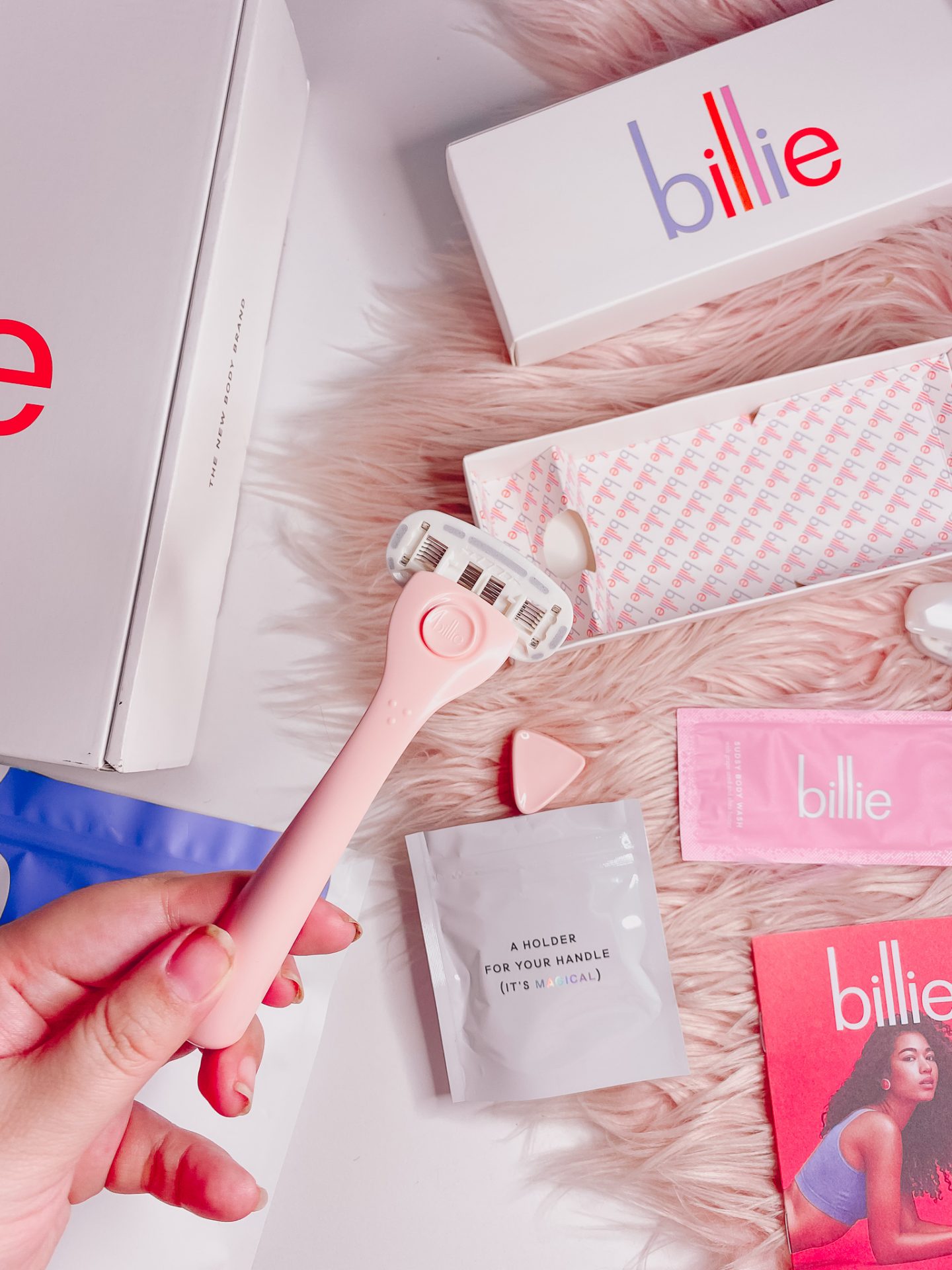 I wanted to start reviewing all the “hyped up” items on the internet.  So whether you see it being raved about from an influencer or you keep getting those ads on all the sites then I’m here to see if it is really worth it. I will be trying all the ones I’m curious with  first and then taking on suggestions. I will also be paying for everything and this is unsponsored and haven’t been approached by the brand.

My Honest Unsponsored Review of the Billie Razor

If you follow a handful of influencers on Instagram, it’s hard NOT to come across the Billie razor. It’s a good and cute razor, but the price and convenience is where its at. I was needing a new razor cartridge and after seeing all the reviews and ads on it I thought I would just jump on it and buy this instead of purchasing a new pack of cartridges which would be a lot more to be honest.

Here is the link. 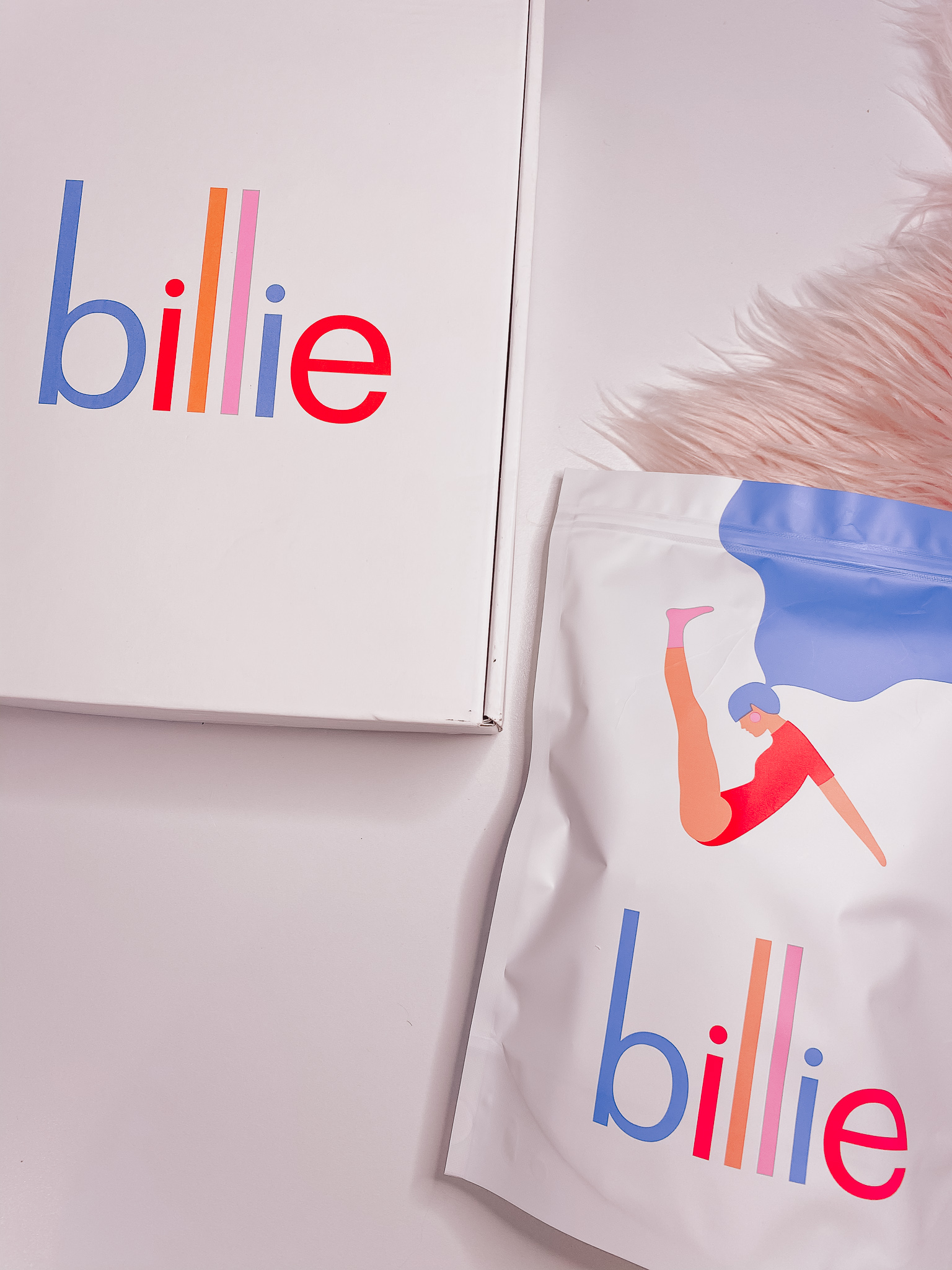 My Razor Background and Important To Know

I started shaving my legs later in life than some. I think I had just turned 18 when I began shaving. I was hesitant because of all the rumors that it would grow back faster and thicker. I’m not sure if that is true or not for me. When I started shaving initially, I used my dad’s razor but I always ended up cutting myself and that put me off. I then tried Nair which worked but was such a hassle and messy so after a while I gave up on that and moved over to an electric razor which never got close enough for me and left me so spiky and prickly like a cactus so that was a no for me. Then I finally found my one true love and so I thought. I used the Schick Intuition Razor and I’ve been using that for maybe 4 years now. I first bought the green but I found it came in hot pink and in the Philippines I had a special edition one that was hot pink and had a pink floral handle. In Manila, I didn’t notice the price of the razor refills. I would buy a box of 3 every two months or so. One refill lasted me from 2 weeks to a month depending on how much I was shaving and how often I let my legs go. If I hadn’t shaved in a while then one refill would only be good for 2 uses and that’s it. When I moved to LA, I had to buy the refills and I’m grateful they have the same exact ones here but it was far more expensive and I was putting off shaving due to how expensive they were but I needed to shave so I just closed my eyes whenever I bought them. That’s one of the reasons I wanted to try the Billie Razor.

I’m reviewing this as someone who has pretty thick hair on my body. I use it on my arms, legs and bikini area which is the most places I shave. I grow hair back like crazy but for some reason the head on my hair doesn’t get the message. I have to shave about once every week or if I have something special then I’ll do it the night before the occasion. If I don’t shave then my hair on my legs go wild. I didn’t shave from November to February because it was cold and I was wearing jeans and layers so much I didn’t feel the need. Then when it started warming up I need to shave again so I did with my Schick razor. However lock down happened and I didn’t feel the need to shave again so I let me legs go. I tend to get lazy shaving my legs but other parts of my body I don’t It’s just the legs that I struggle with for some reason. 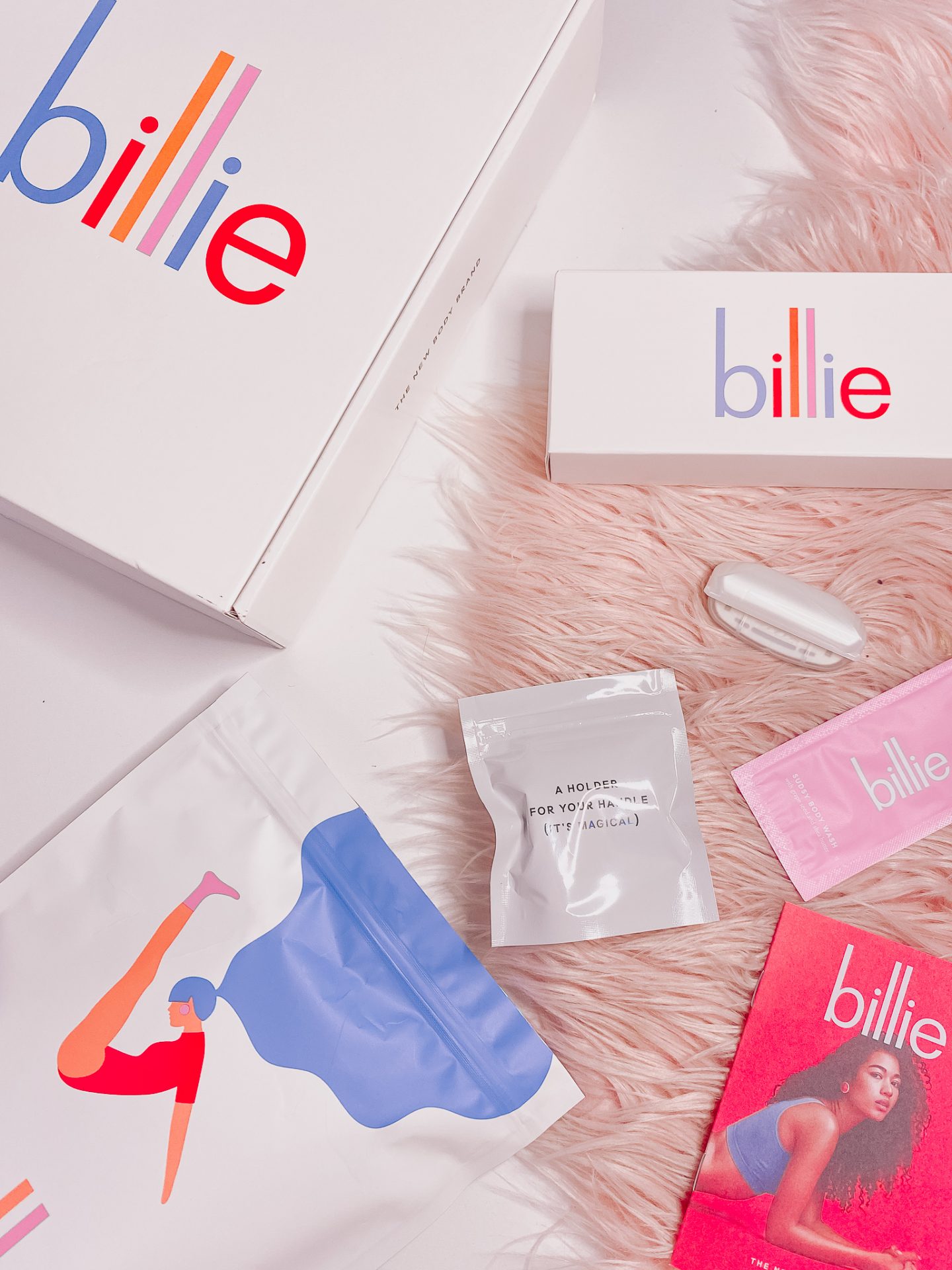 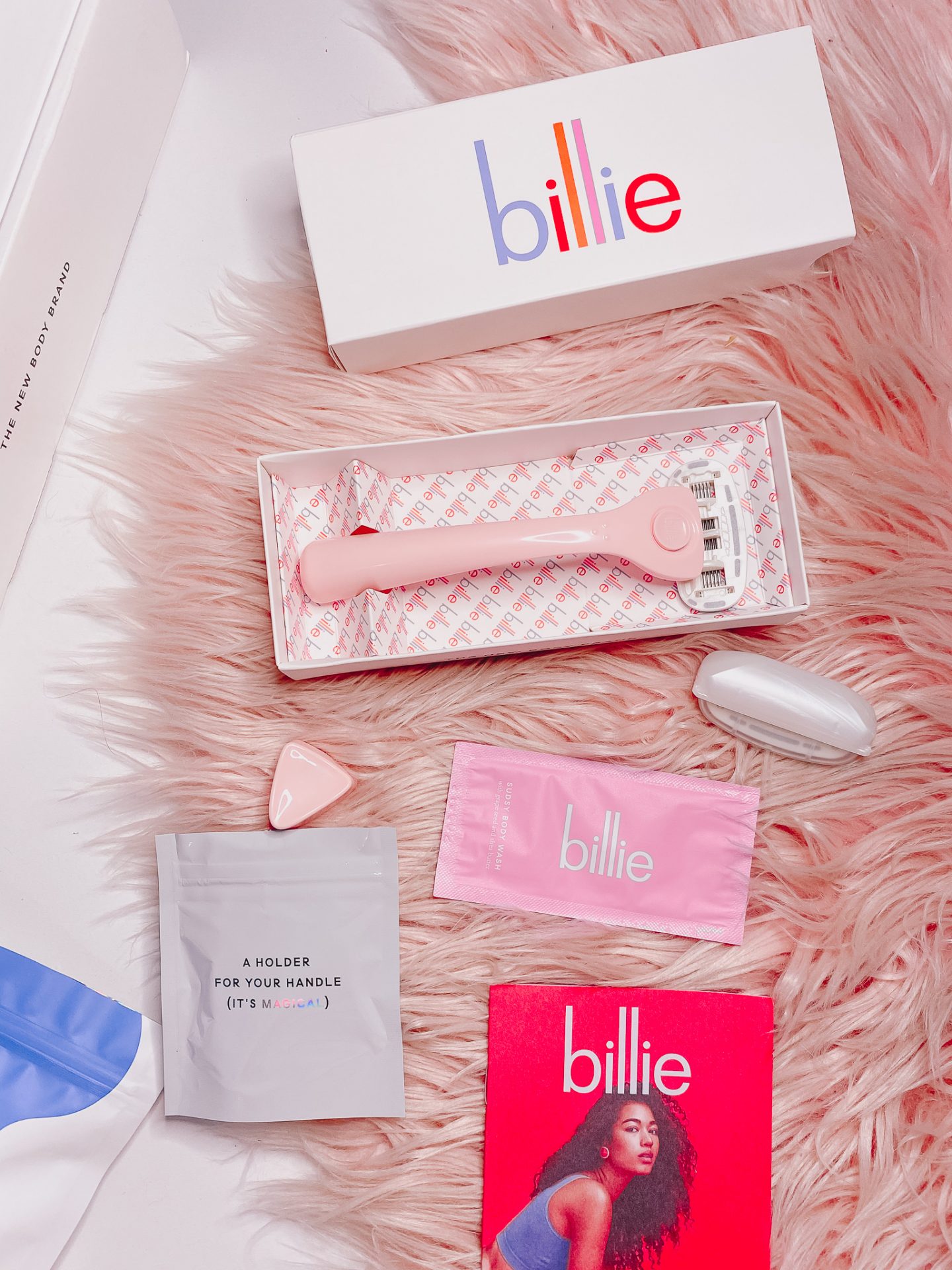 My First Impression of the Billie Razor

The first time I used this razor I had very high expectations because of all the hype. I thought it was going to be life changing and improving my shave time. So at first I had mix thoughts about it. I have to admit though, it was amazing from the get go. It gave me the closest and smoothest shave I’ve ever had but it didn’t last as long as it claimed to be so it made me disappointed. Although, I’m not sure what I was expecting for a razor, right? I had some pretty long hair on my legs when I started using the Billie Razor sort of like the legs in the advertisement for it. I was too shy to share a before and after because it was bad but I loved how it go rid of all the hair with no hassle. Trust me it worked perfectly that’s why I was so impressed. The week after though got me to have mix feelings.

A lot of the claims I’ve heard people say is “you don’t have to shave as often” which I don’t actually think is true in my case since I have such thick and coarse hair especially on my legs and when it does grow back it’s spiky. I think it’s just a me thing because it did stay smooth two days longer than with my other razor but no miracles happened with me. It still grew back the same.

My Impressions 3 Months On

I stuck with it for some time because I wanted to be able to give it a thorough review, and I have to admit, it has definitely been great. I don’t experience any razor burn when using this on any areas of my body. I do end up cutting my knuckles if I’m not careful but that’s just me being careless and just going over it any direction. I haven’t cut my legs so far even though it is sharp so I must be doing something right. Now I’m going to comment on different aspects about the razor.

I actually REALLY like the lotion part around the blades. I think it does a really good job of smoothing/conditioning your skin which is one of the reasons I loved my old razor and was hesitant to try a new one that didn’t have this. I think it’s important for someone who is too lazy to use shaving cream like me. It’s an extra step that I’m not fussed with and glad it’s incorporated. The downside is it gets gooey and also it gets “gummy” after use so it’s not the greatest to hold but if you’re not taking it out of the shower then does it matter if it gets gummy when it’s wet? It doesn’t bother me and I like the lotion part to help shave.

It’s super cute! I’m a sucker for pretty packaging and cute things that bring me joy. I like that it makes me happy every time I see it in my shower! It’s a pretty color and comes in multiple colors which you can choose to match your personality. I also like the little magnetic sticky holder that makes it easy to hang and access in the shower. There’s something so satisfying about sticking the razor to magnetic and it’s one of my fave parts. As for the branding, of course it is super cute but the message behind it is also great. I love the ad for it and it shows really hair legs and not just some smooth legs using the razor. That is such a good message and it is another reason I was behind on trying it.

My favorite part about the Billie razors are the price at only $9 for your first set with the handle, cartridges, and holder. After that, it’s $9 for 4 cartridges that ship whenever you choose. (There’s every month, every two months and every three months which I chose the last option to test out but definitely going to change). That’s only $2.25 per cartridge!!! I was paying so much for my other so the price is really worth it for me. It’s a pretty great deal that is tough to beat! If you’re like me, then you forget when to buy more and only notice when you’re on your last one. This typically happens to me way too often and now I don’t have to have that problem. This obviously avoids that and comes to your doorstep! This is definitely a great perk of the Billie razor.

That was my honest unsponsored review of the Billie Razor. Overall, I’m very pleased with it. I’ve come to the conclusion that I think the Billie Razor is here to stay, at least for the time being for me! It has good performance, great brand mission, convenient and of course the branding is super cute which wins in the end! I’d love to know if you tried it and if you liked it or didn’t. If you want to see more beauty reviews then I have a lot more here. Those were my honest unsponsored review of the Billie Razor. Thanks for reading! xo