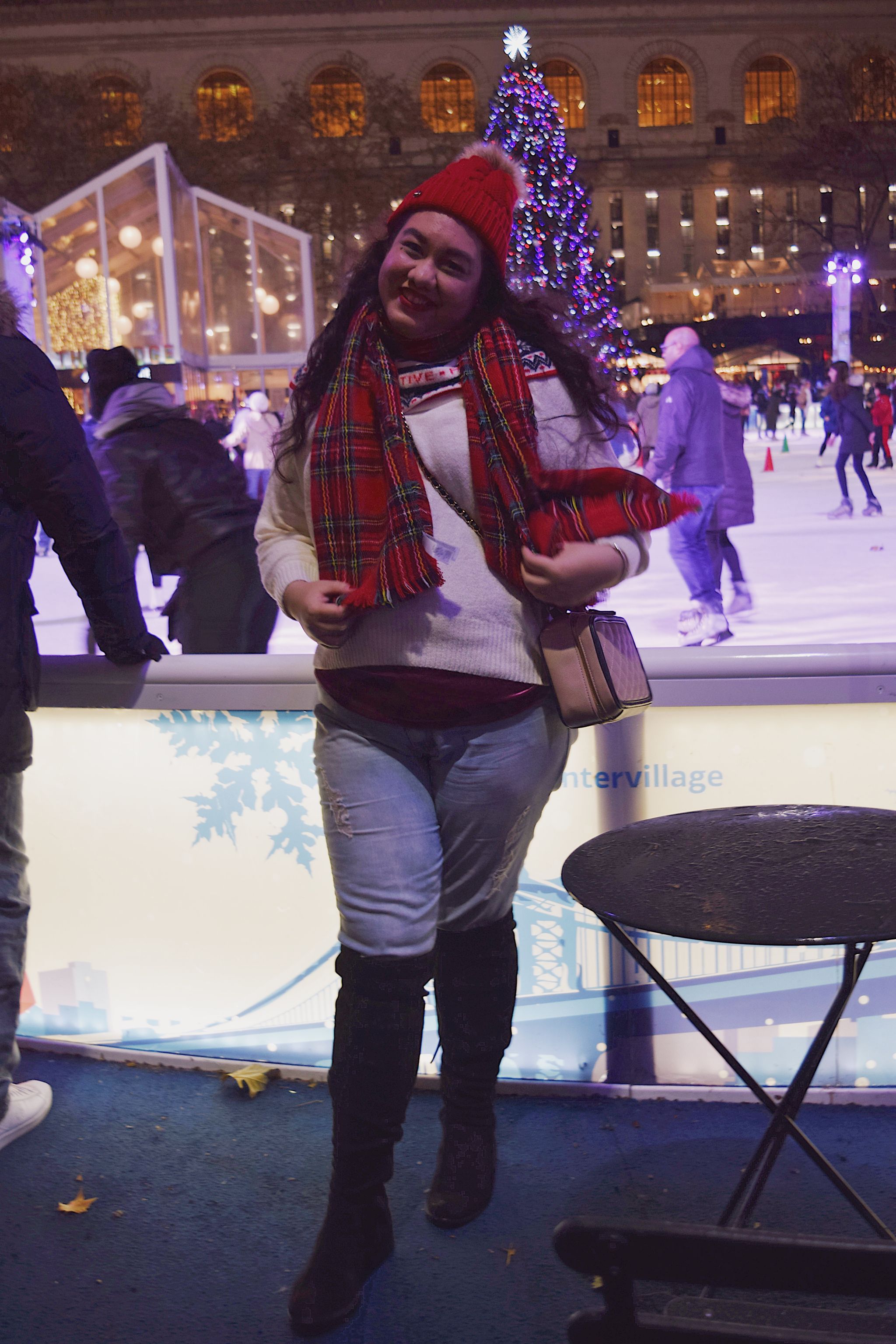 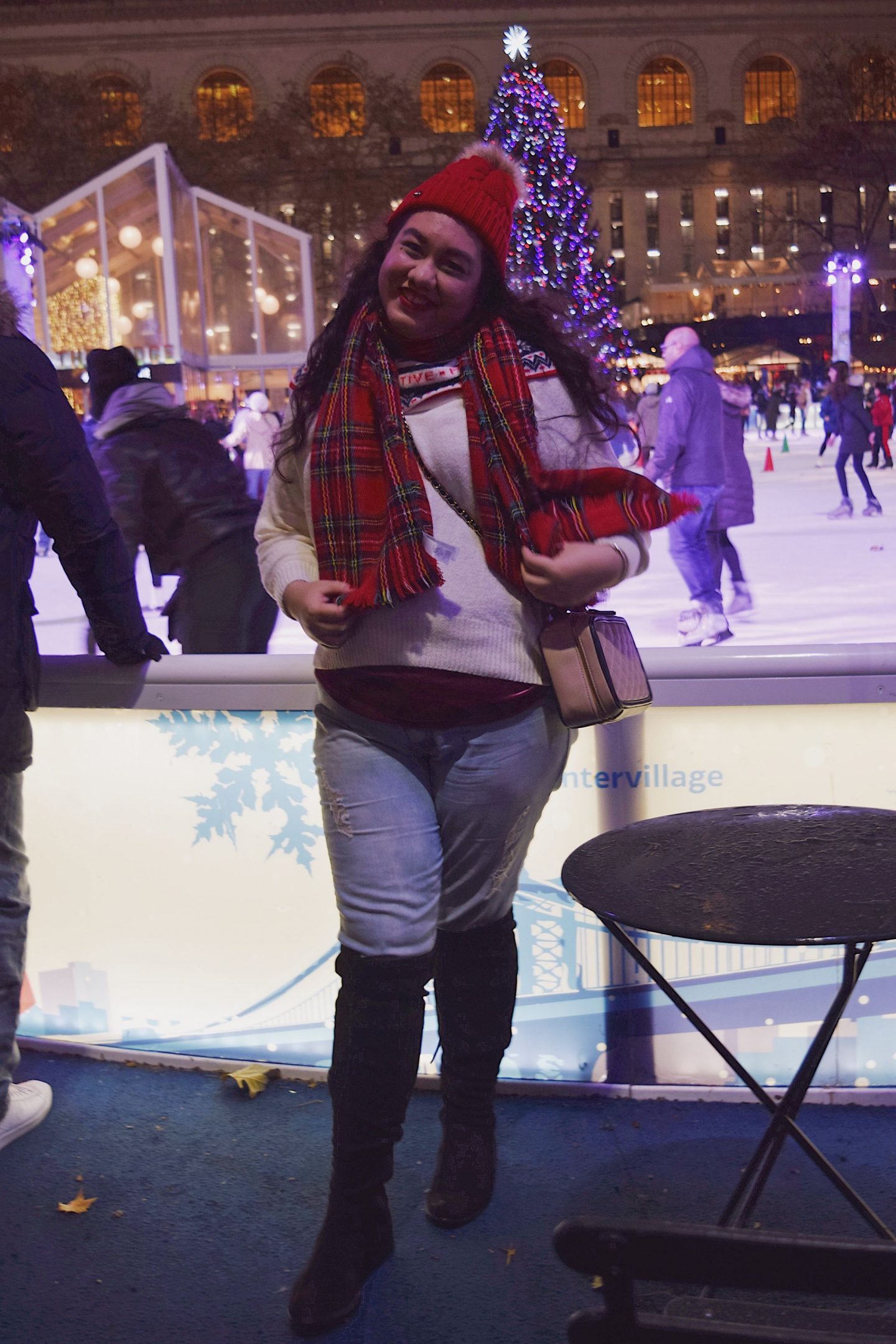 Happy Monday! Today I’m sharing my Christmas in New York city guide! I know it’s a little late as it’s now January. I was trying to get it up earlier in December but I had so many pictures to sort through and my photographer didn’t send the last batch until New Years. I wanted to share all the pictures and don’t do it half way so I waited and now you can see all the fun and festive pictures I shot while visiting New York in December. It’s true with everyone saying it is so magical during the holidays and I’m glad I got to see it. This is what I did in New York during the Christmas time and I highly recommend all the places I saw and just going during December as you won’t regret it. So here is my Christmas in New York City guide!

I’m not sure if these will be up again next year but I hope they are so you can experience the magic of New York during the Christmas time. I was planning on waiting until next holiday season to post this as it did seem late but I said I would go ahead and get it up today and included some photos from my trip! I thought it would be fun to create a little guide of what I did while I was there. I had most of the spots that I wanted to visit mapped out and saved in my notes section on my phone and others I just stumbled upon. Enough with my long intro here’s the details of my Christmas in New York City guide! 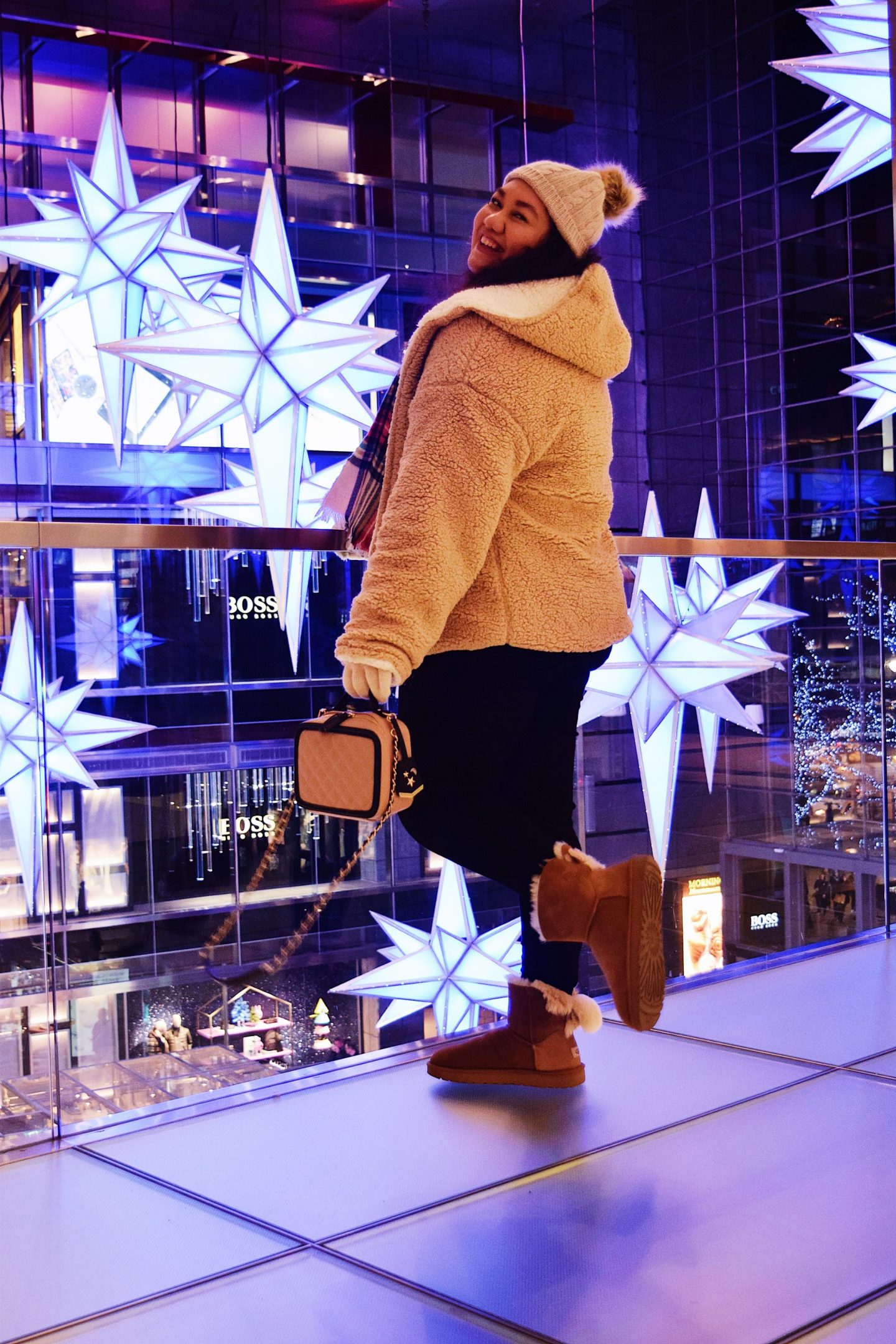 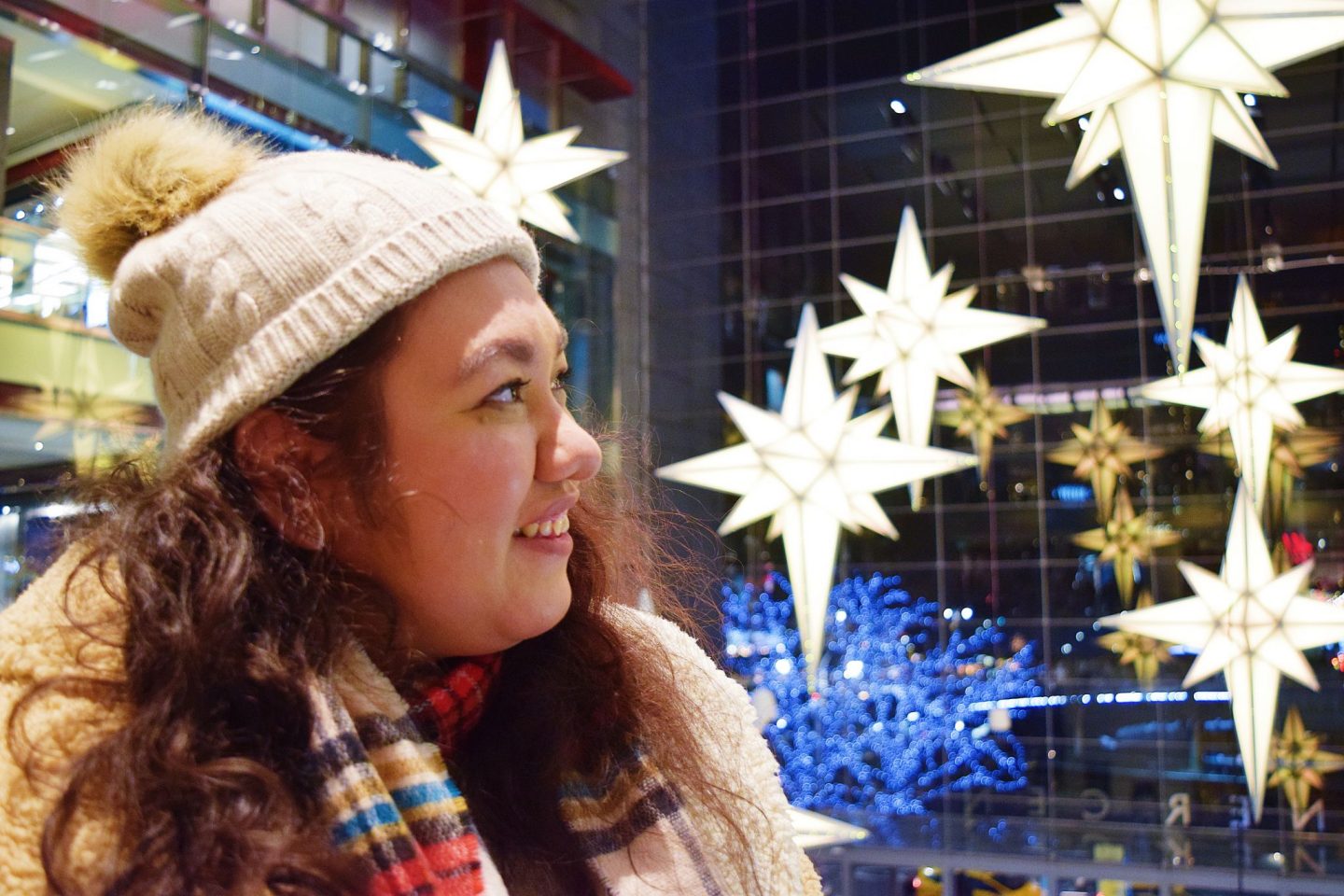 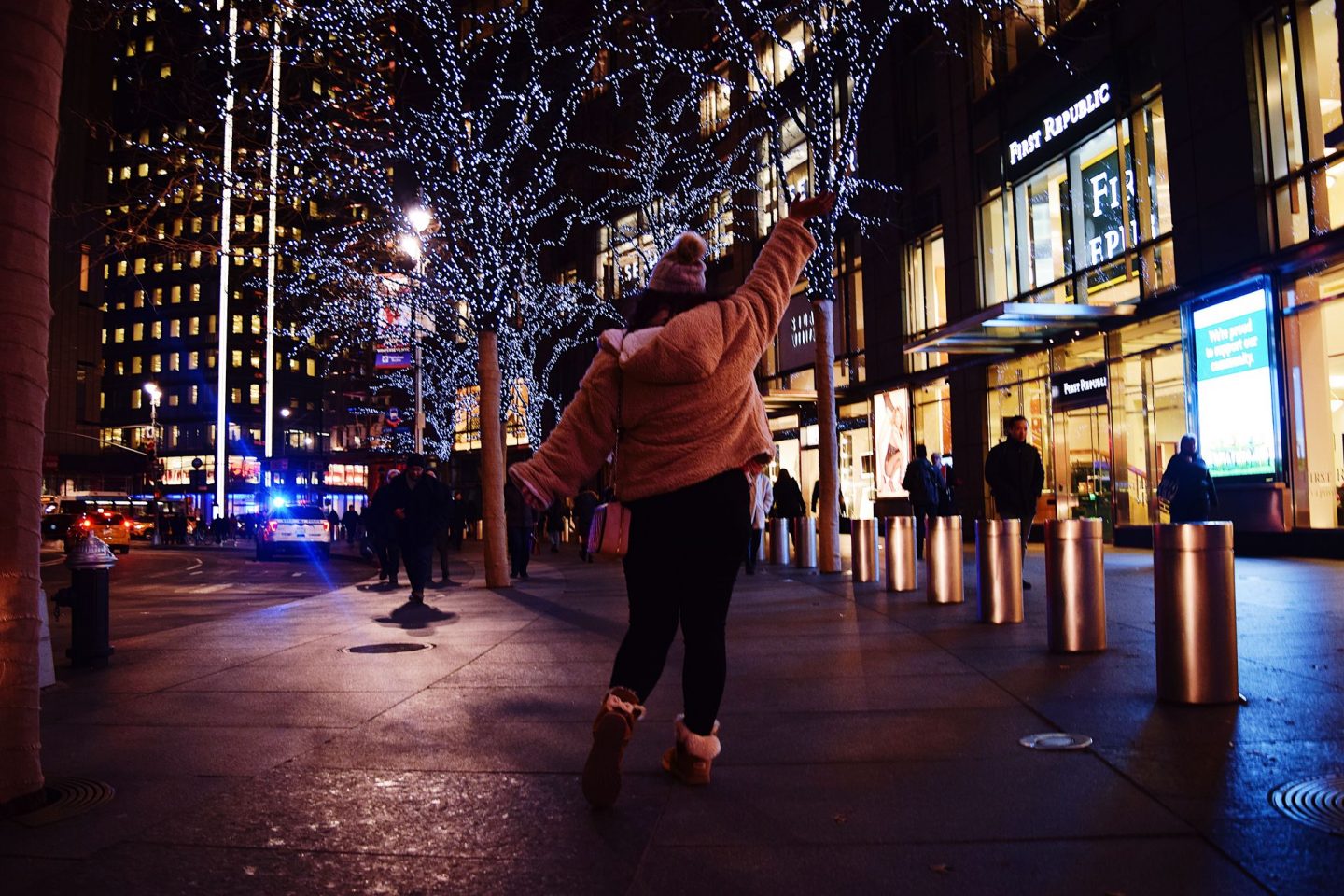 To start my Christmas in New York city guide, I began at the Time Warner Center to meet my photographer. We shoot some pretty pictures and the decorations were so pretty. It’s also a great place to shop and it was inside so I was freezing trying to take pictures. Also just outside there were so pretty twinkle lights I shot with which made it more Christmasy and magical. 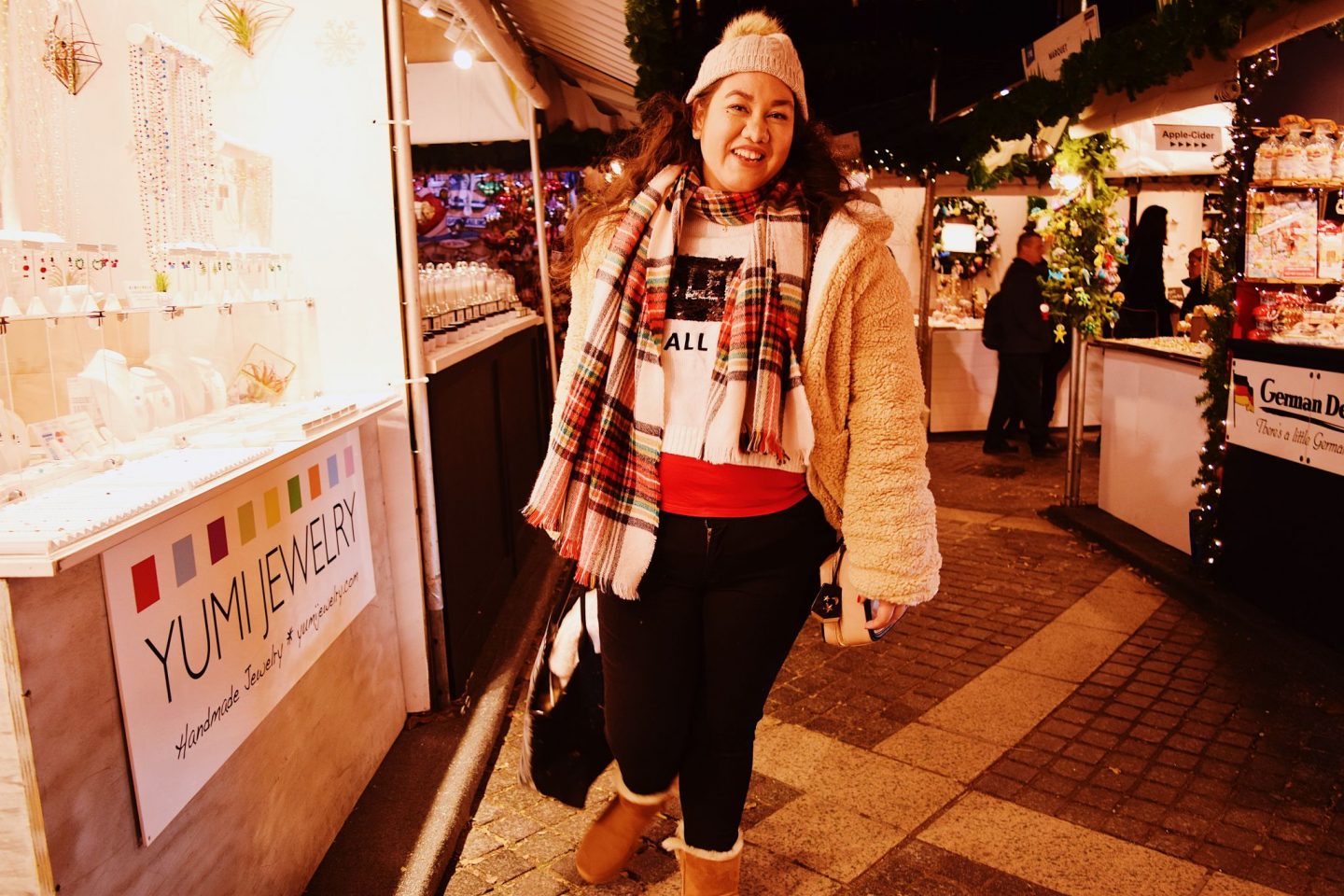 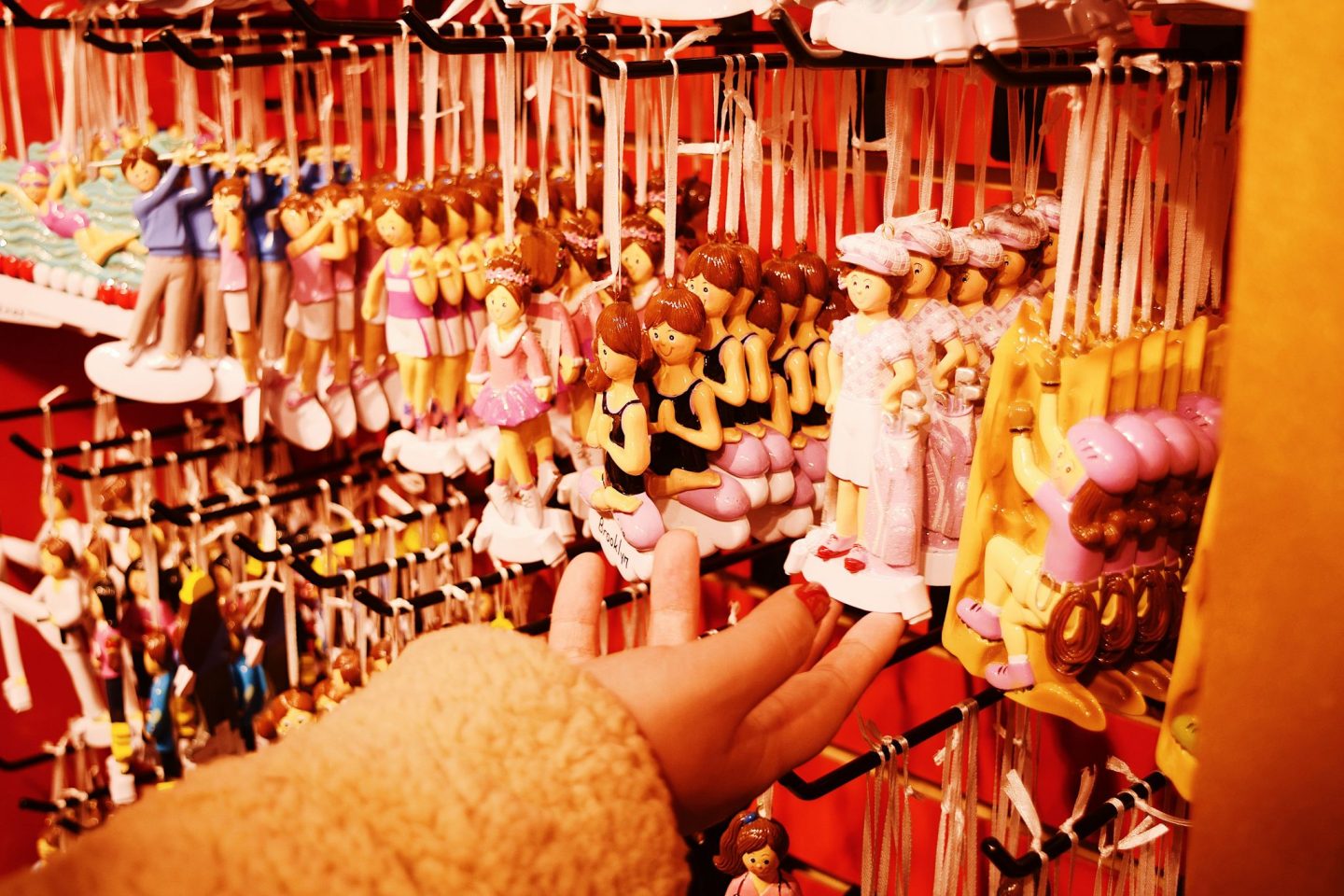 Across the street was Central Park and there was a small Christmas market where you can buy all sorts of things like ornaments, jewelry and more. Plus there is the ice skating ring which I didn’t go on but it does look fun and so pretty during the day and night. 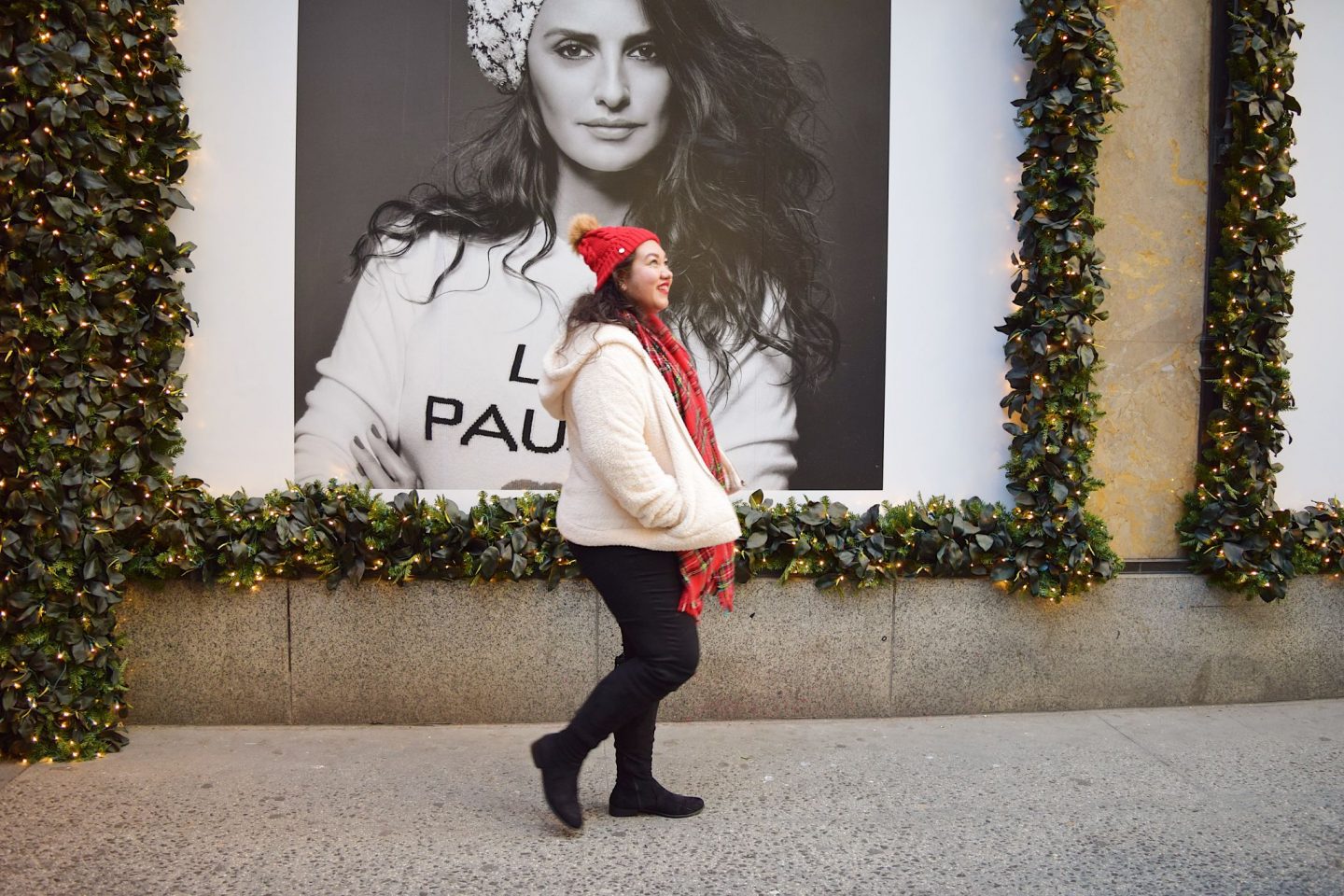 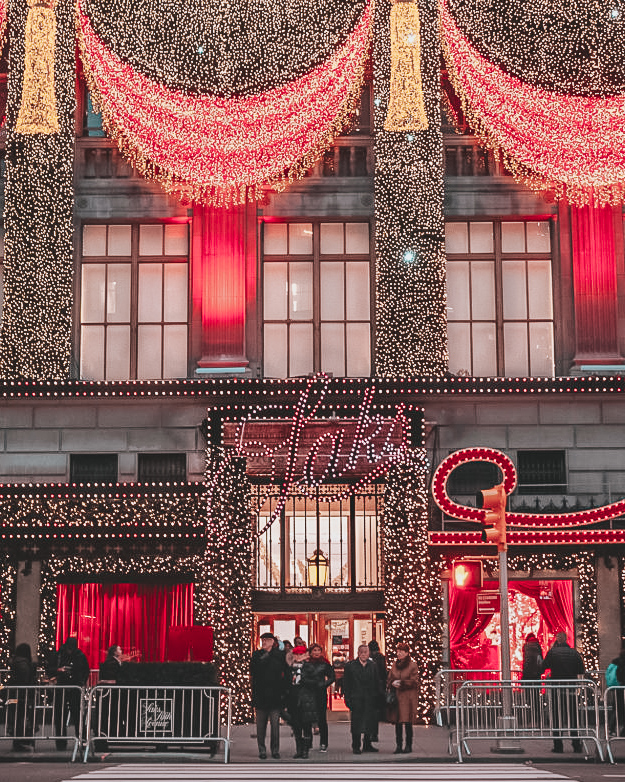 There are so many pretty holiday displays to look at. Literally everything is within walking distance of each other! So walk up and down and see all the wonderful displays. It is worth taking a stroll down that way and you will find tons of Instagram picture opportunities. Saks Fifth Ave. had the most beautiful light show and display as well and I was memorized by it. 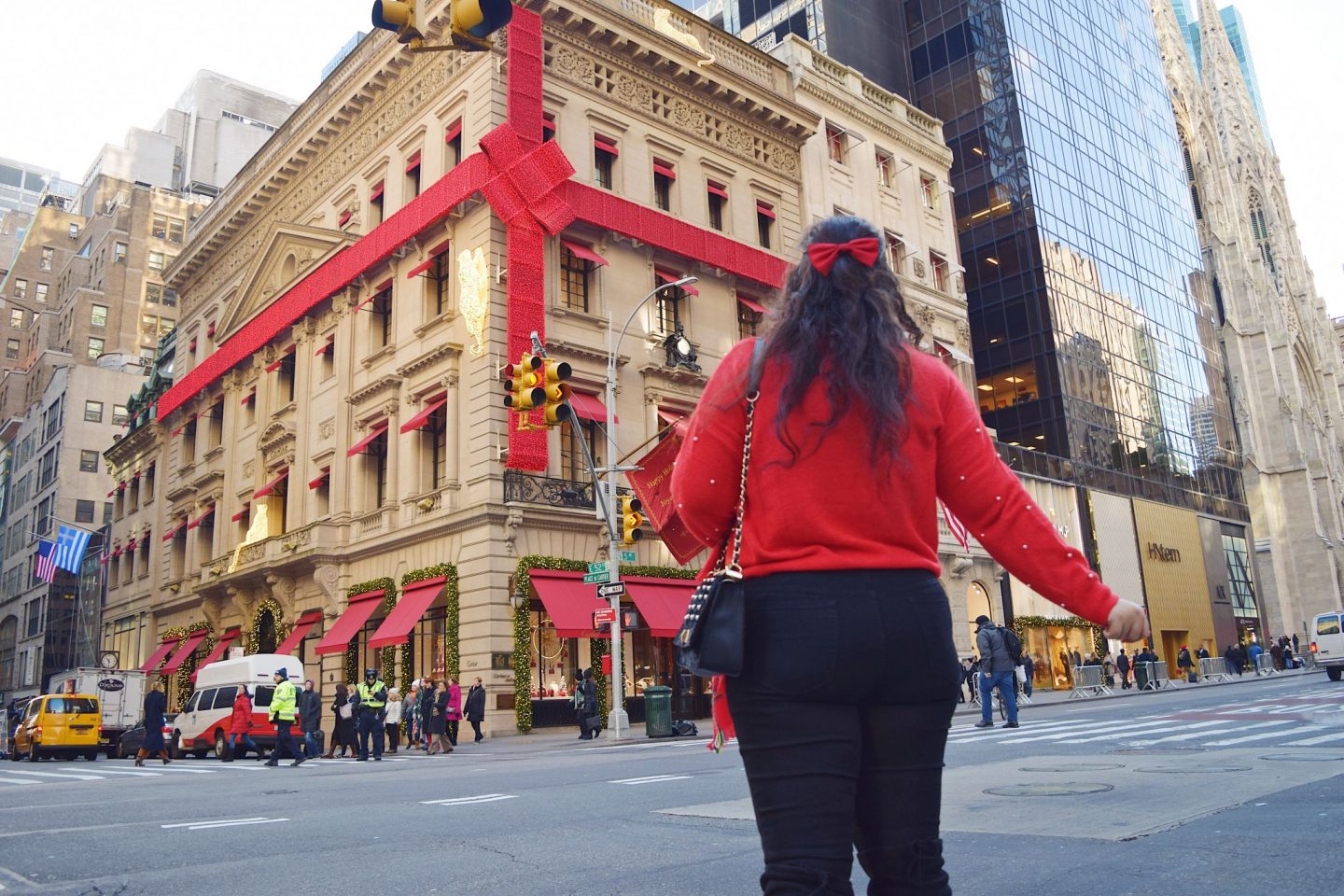 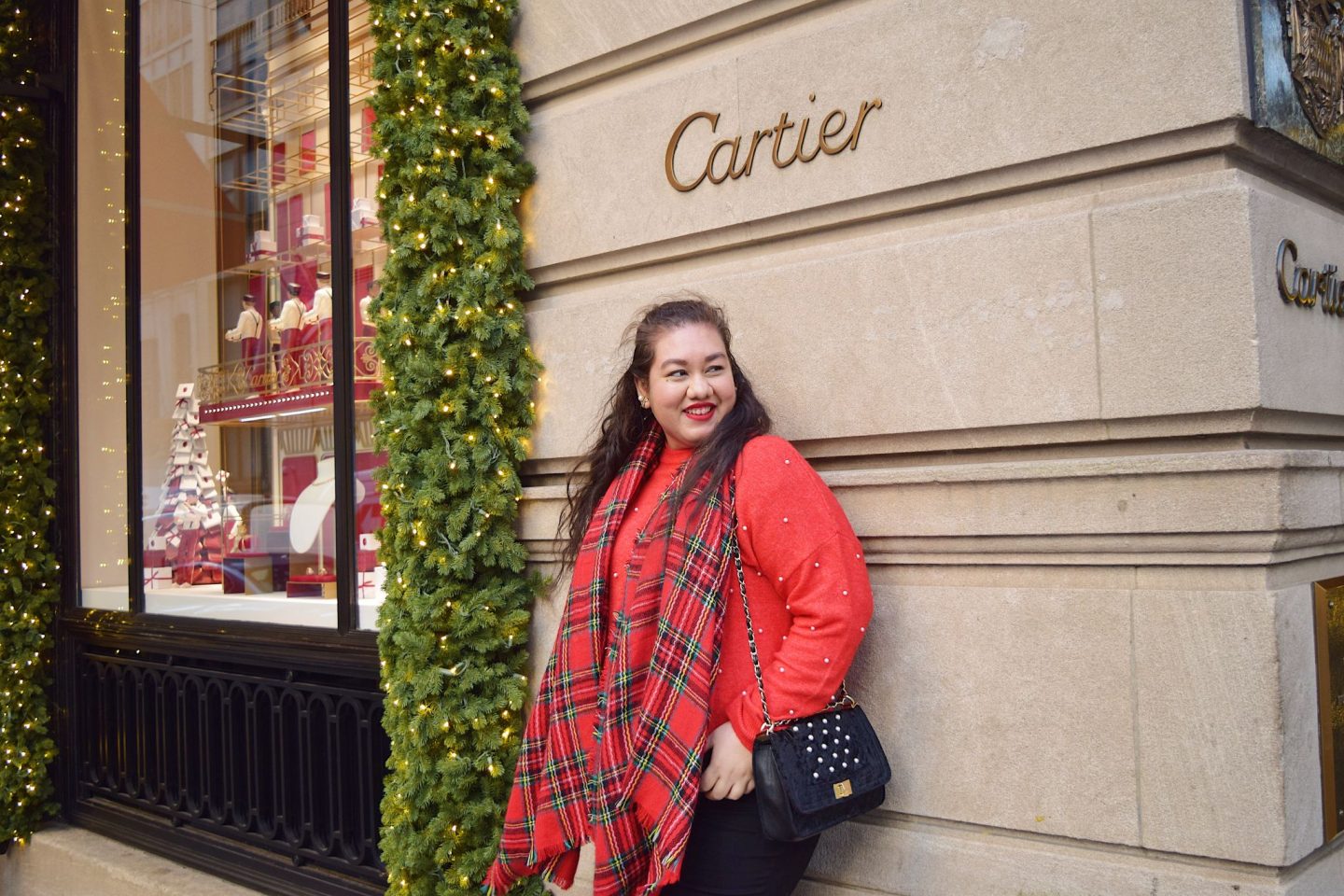 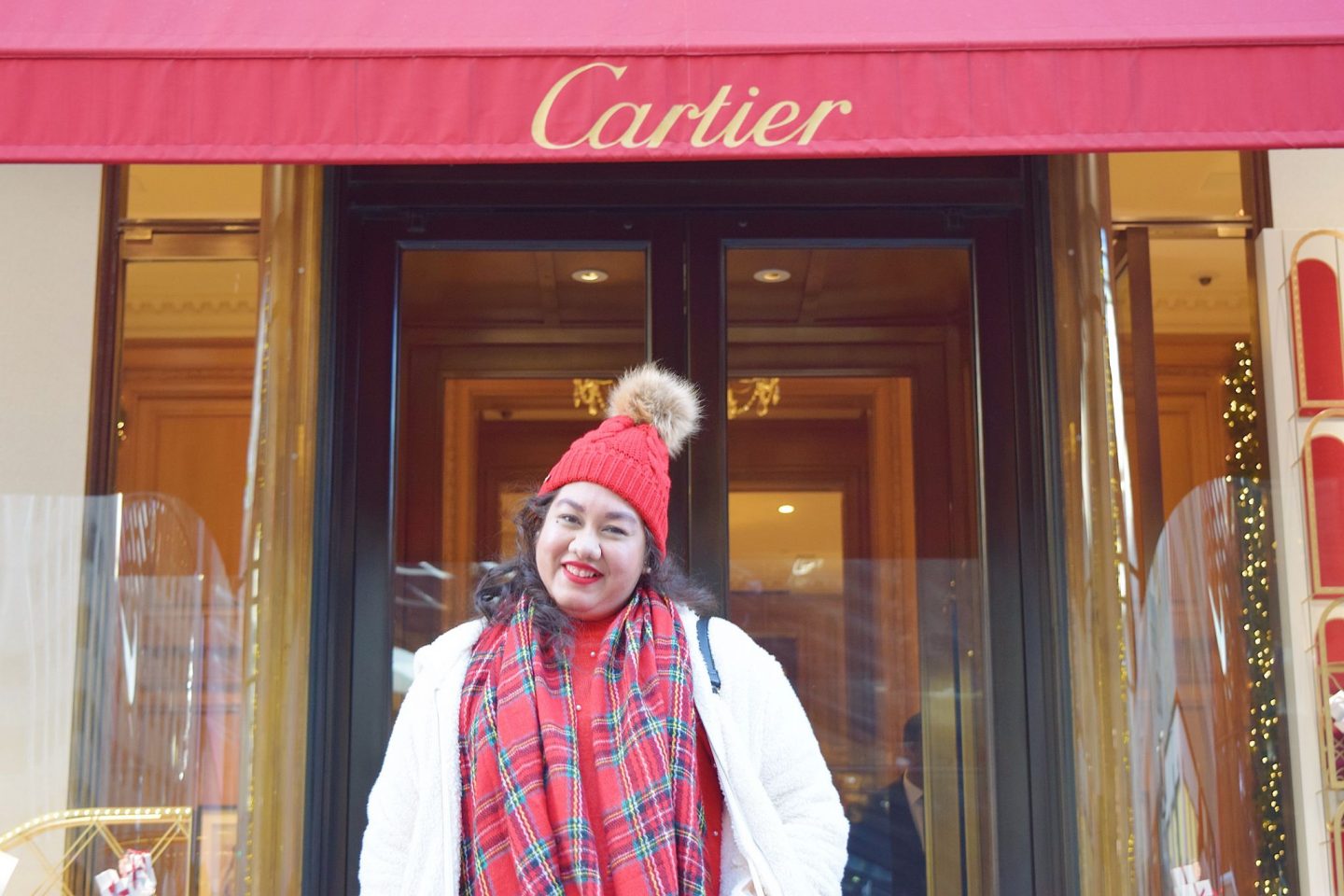 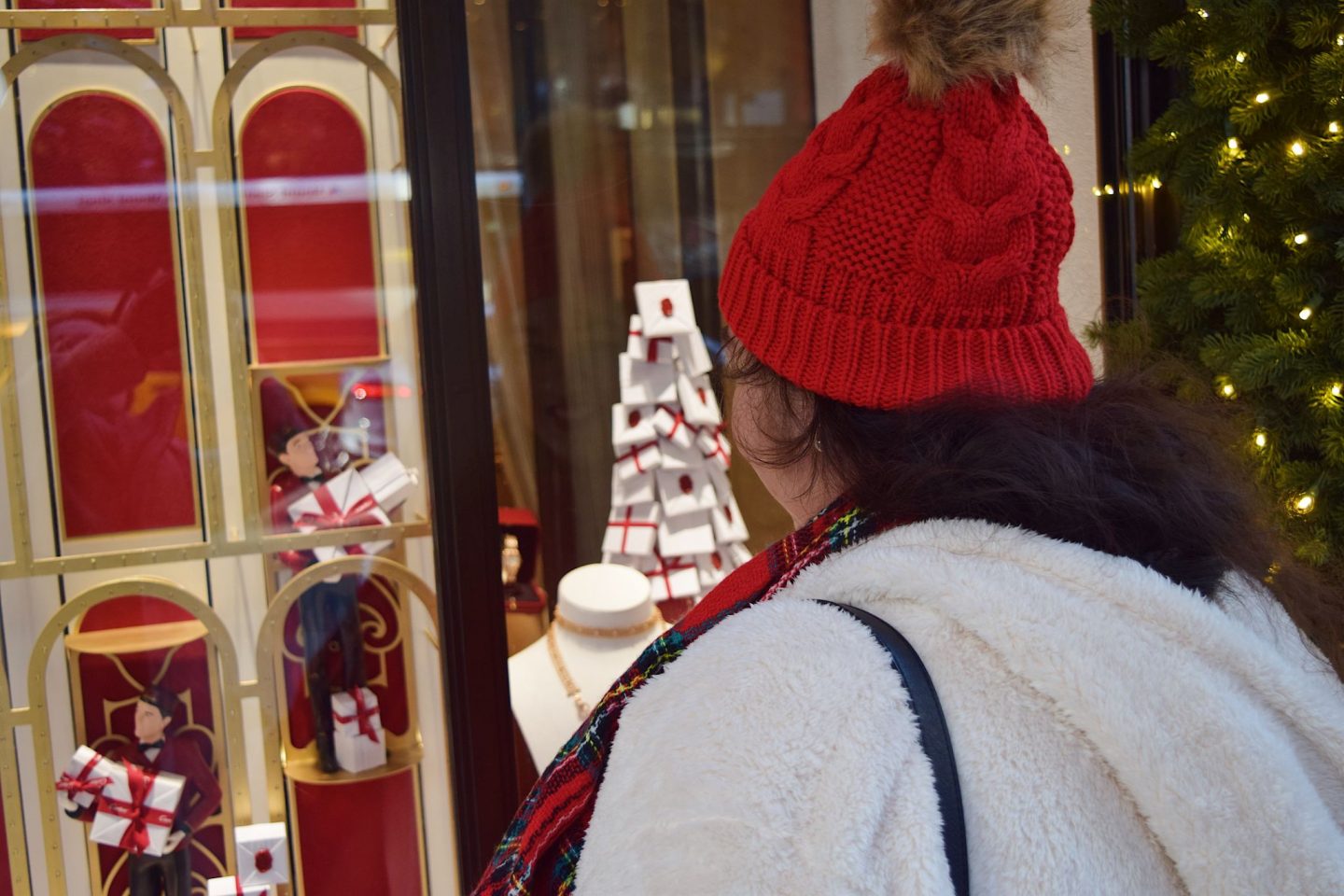 Of course a short walk from that is the iconic Cartier bow. You know me with bows so this was a must see for me. In the photo above, I’m standing in front of the store which is located at 10 E 52nd St. which has a huge red bow that lights up the whole building! I also shot with the display as it was so cute too. This was so fun to see in person and I’m glad it was on my list. 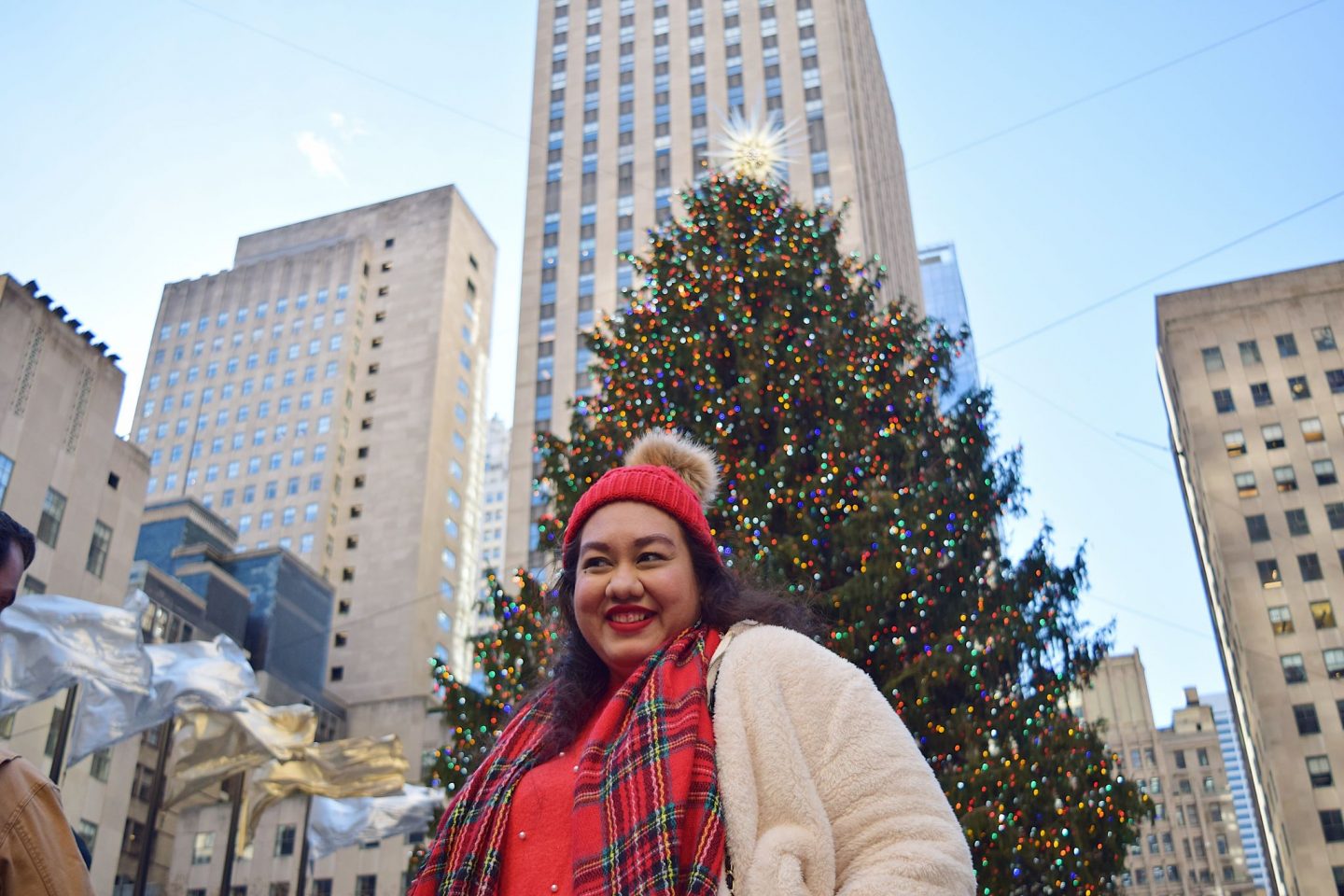 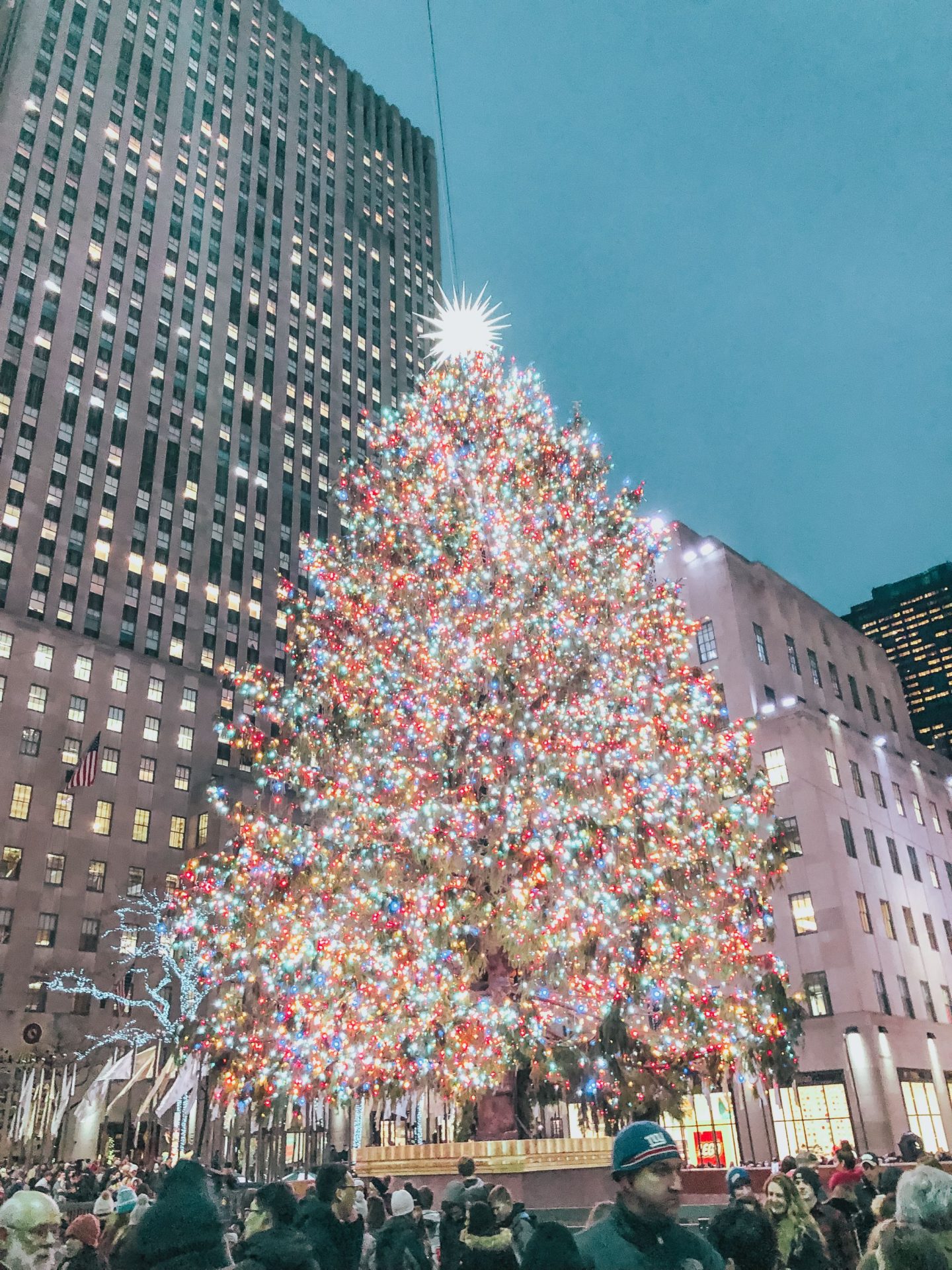 This was one of the most iconic places to visit in NYC during Christmas. I saw “the tree” in person after seeing it on TV growing up and just hearing about it. There is an ice skating rink and it looked to magical and fun but again I didn’t try it. It gets very crowded here in the afternoon and evening so if you are wanting to get pictures then get there early. I went 2 times one during the day and then in the early evening as it was getting dark. That’s where I watched the light show at Saks as well and you can see it right by the tree making it so pretty and magical as well. There are also other decorations around and the Radio City Music Hall is close by and I saw that. 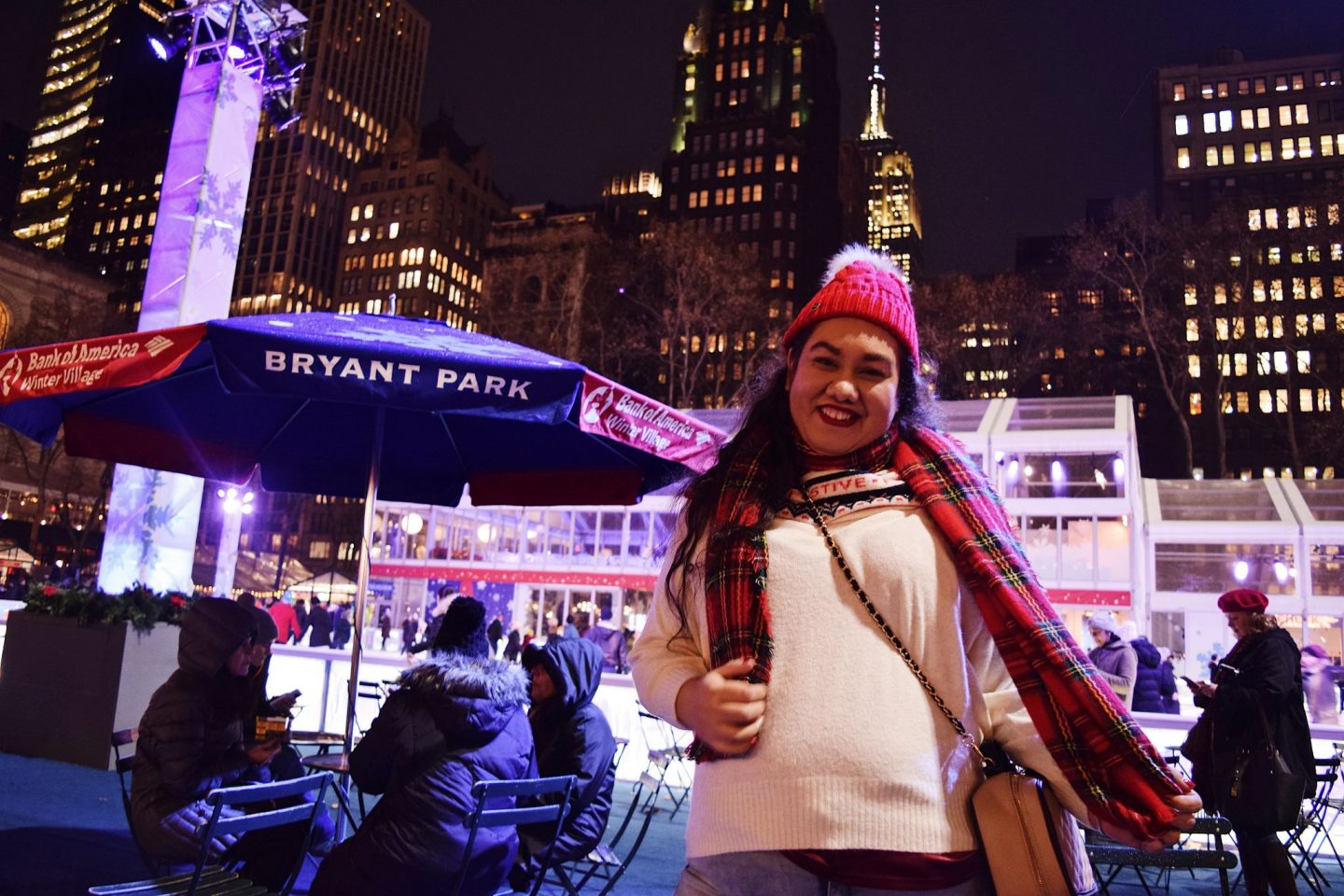 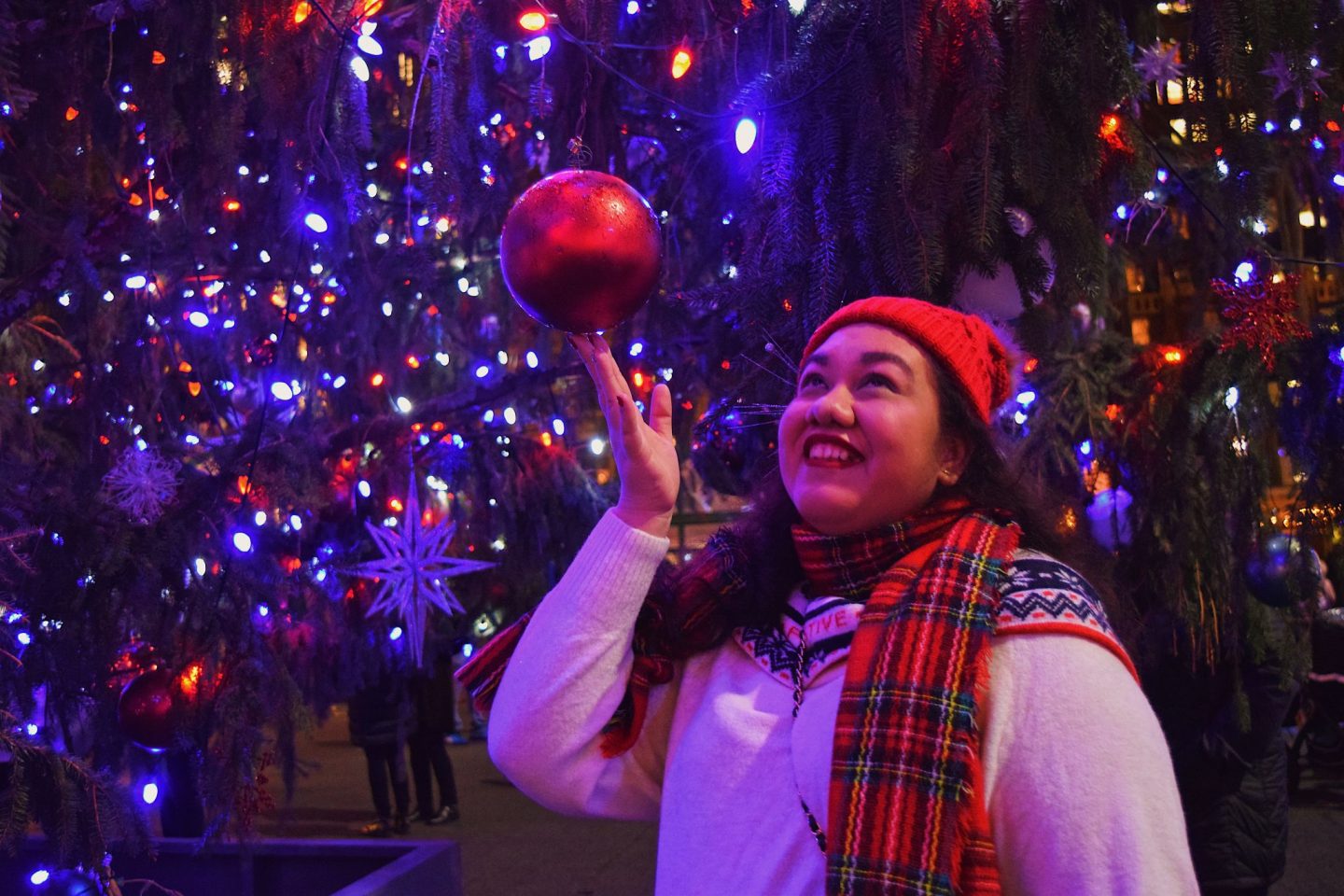 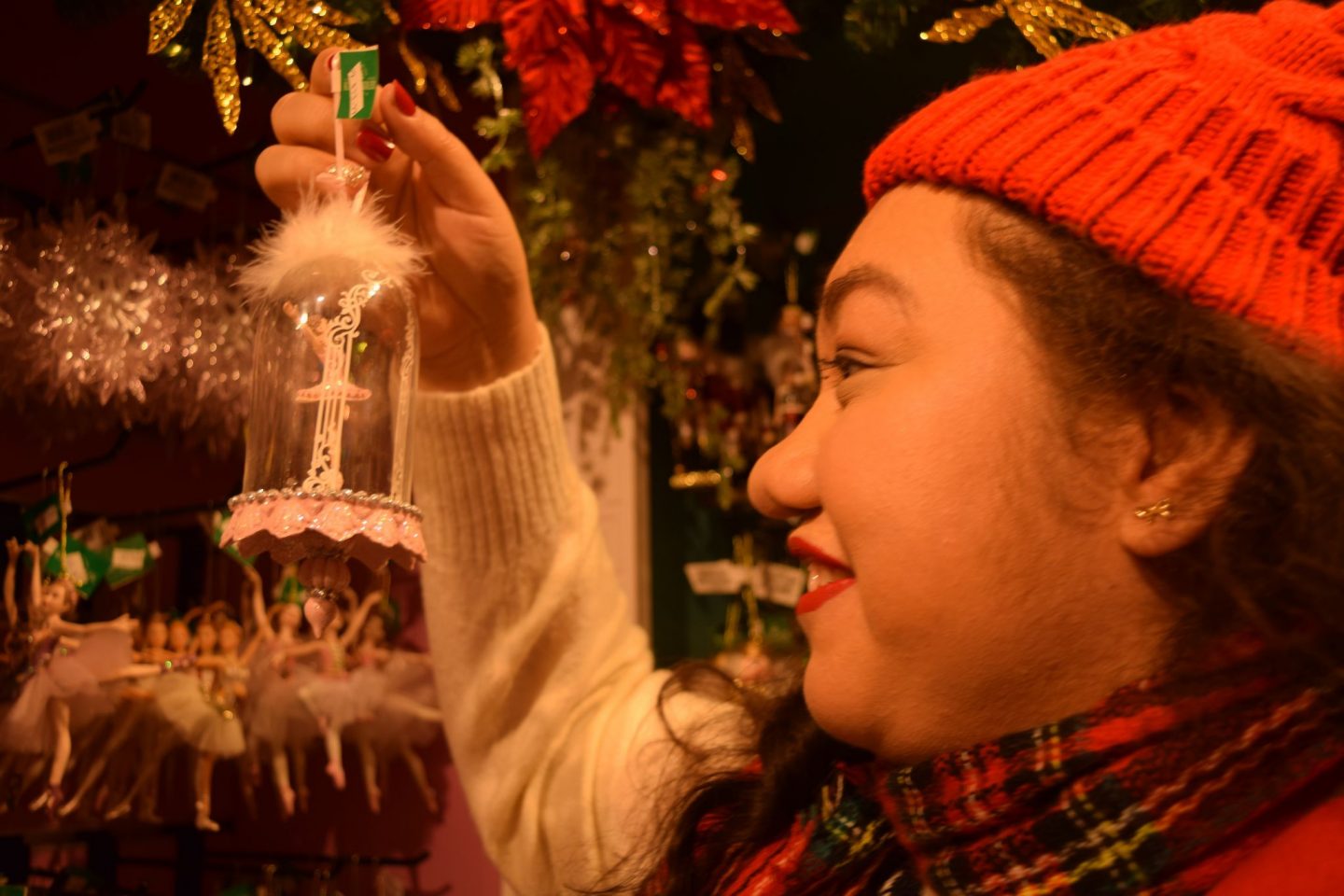 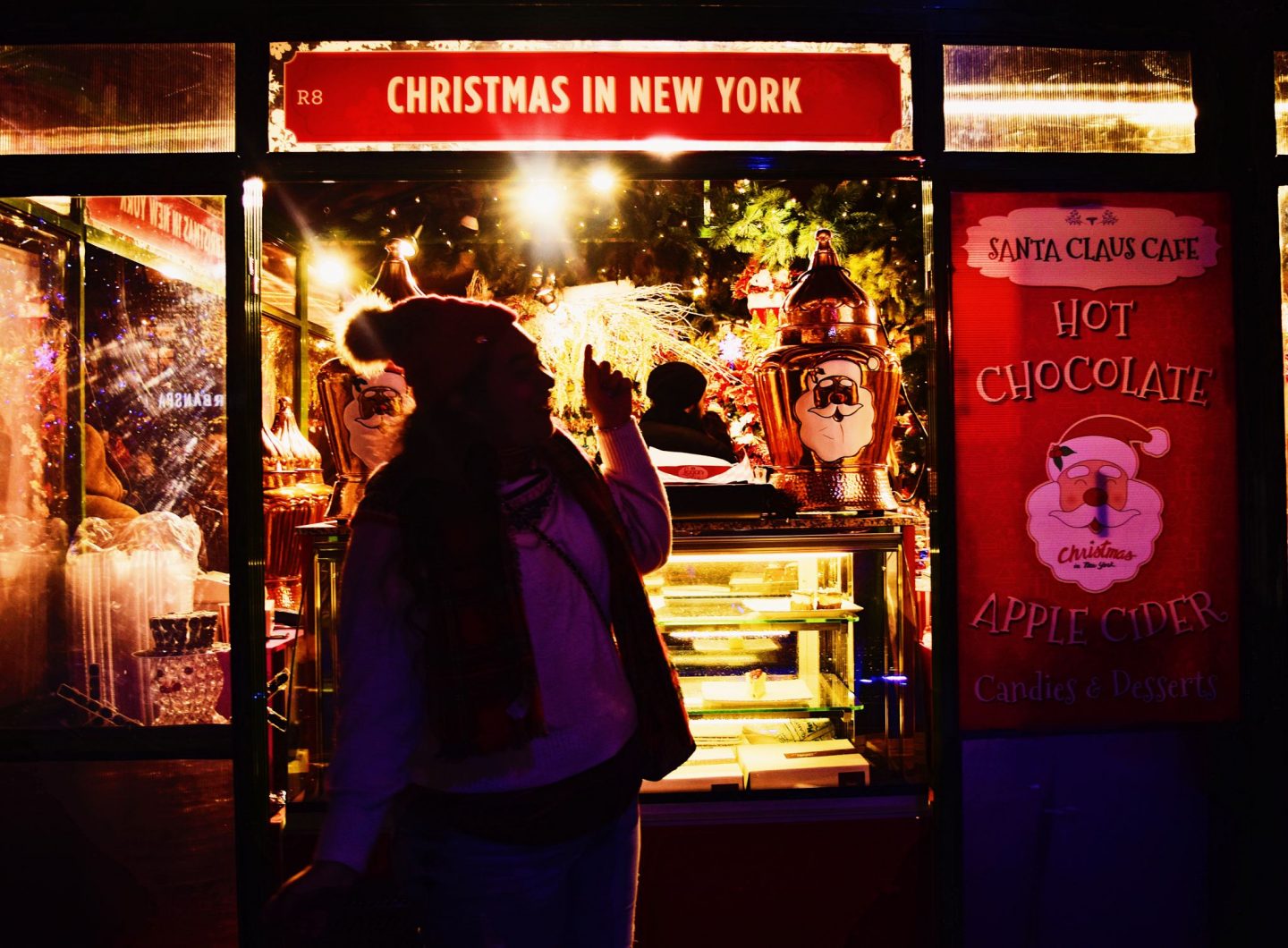 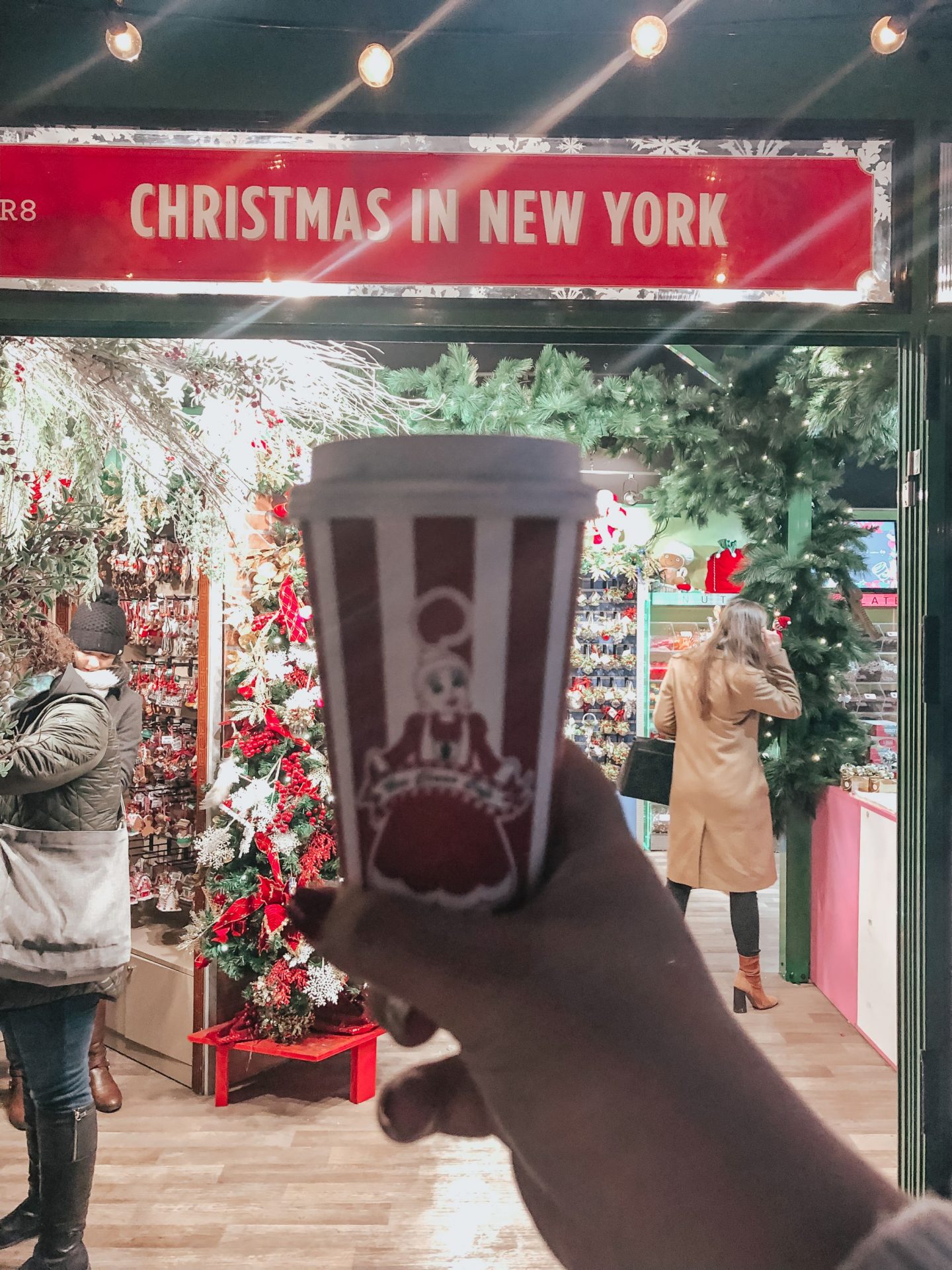 I think this was my favorite thing that I did on my trip! It was walking distant from my hotel and after seeing it on Instagram a few times I knew I had to check it out. There’s an ice skating rink and it’s a market featuring cool ornaments and delicious drinks and food. It’s pretty similar to the little Christmas shops I saw in Central Park but on a bigger scale. If you see a little stand with the words “Christmas in New York” on top, I highly recommend buying a hot chocolate! I also bought a special ornament as well. There were so many vendor kiosks set up surrounding the ice skating rink with food booths but sadly I didn’t try anything buy the hot chocolate but it was fun looking around. We popped into the indoor Lodge venue where it was all lit up as well and if you get to cold you can go in and warm up. I could have stayed longer but I had to see other stuff too.

A few places I didn’t get to visit but plan to next time I go back. Is it bad that I’m already planning another December trip back to New York? I mean if it does go through those places would be next to explore. I’m sad I didn’t do more but I feel like I packed in a lot of Christmas activities and got to experience it during the most wonderful time of year.

That was my Christmas in New York city guide! I hope you enjoyed it even though it is late. It was one of the BEST trips that I’ve been on. I highly recommend trying to make it to New York City for Christmas at least once! I know there are so many more things to do and see but these places are everywhere I went and would recommend for you to see. There will be the longest and most detailed travel and photo diary coming as soon as I organize the million of pictures I took of my New York trip. I just wanted to get the Christmas guide out first. I’m so excited to share more of my trip with you in a few different kinds of posts as well. There are vlogs on my Youtube channel here if you want to see the whole trip in video. So I hope you liked my Christmas in New York city guide and hope it helped and inspired you to visit! Let me know the prettiest place you have traveled to during Christmas time!

Previous Post: « A Look Back At My Outfits of 2018
Next Post: Clothes and Accessories I Bought For Winter »