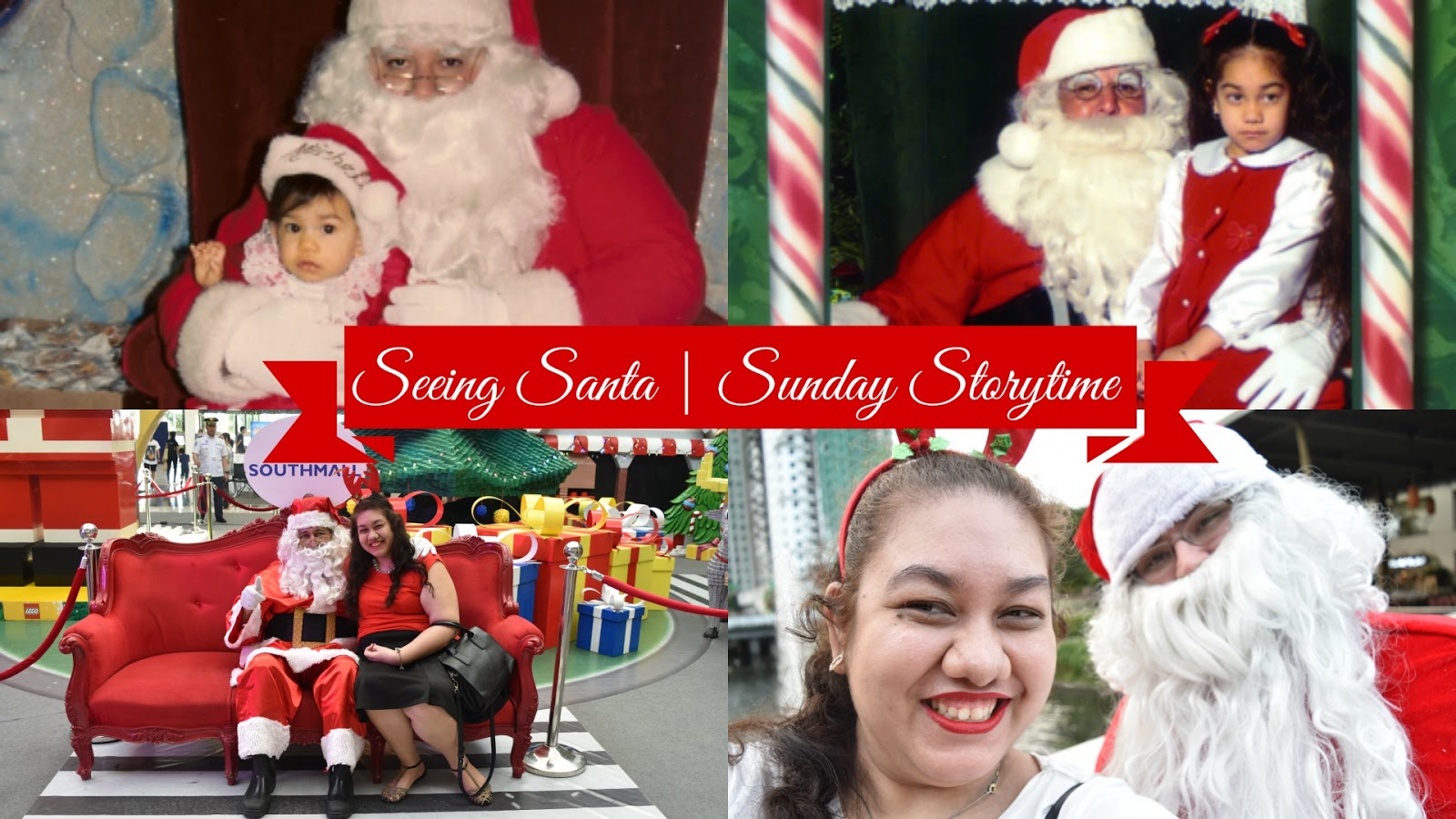 Santa Clause is coming to town!

Happy Blogmas day 18! Today’s Blogmas post is similar to last Sunday’s as I enjoyed doing that and showing you some old pictures. Since I’ve been finding a few photographs in our storage room it is so fun too look back on and it makes me want to print out more photos to look back on in the future like I am doing now. The ones I am sharing today are a few from when I got my picture taken with Santa. I just took my little cousins to have their picture taken and I too got a picture as well. I probably have one from every year growing up but I only found a few to put in this blog post. So for this Story Time Sunday I will be sharing a few pictures and stories I had with the Santa Clause!

Before I show you the pictures I remembered a memory with Santa. So I was pretty young maybe 4 or 5 I don’t know but I had a Christmas dance party with some of my mom’s friends. I danced for them and we put on this short program. At the end Santa would come out and give everyone gifts. Something went wrong right before our performance and I remember the adults freaking out but we were in the dressing room or some back room. I think I remember my mom saying that my dad had to dress up like Santa because the real one couldn’t make it so I watched him dress up and we did our program. After the show he sat down on his chair and put each kid on his lap for pictures and asked what they wanted for Christmas when it was my turn I played along and did the exact same thing the other kids did but I knew it was my dad and they didn’t. He winked at me when I was done and went to the back room. I find that so funny and at the time I believed that he just had to fill in and the real one was stuck at the North Pole. Now I think the real story was it was true the original didn’t make it and my dad had to fill in but he was more believable to play Santa since he has a big belly and a white beard. Now that I’m older looking back on the story my parents were pretty smart. My dad wasn’t like most dad’s that would dress up like Santa every year and pretend but at least once he did and it made me happy. My dad and mom did do things to make me believe but didn’t go all out like some do but still I enjoyed Santa growing up and writing him letters and watching his route on the computer. I had a lot of great memories with Santa that’s why I wanted to do this blog post to share it. 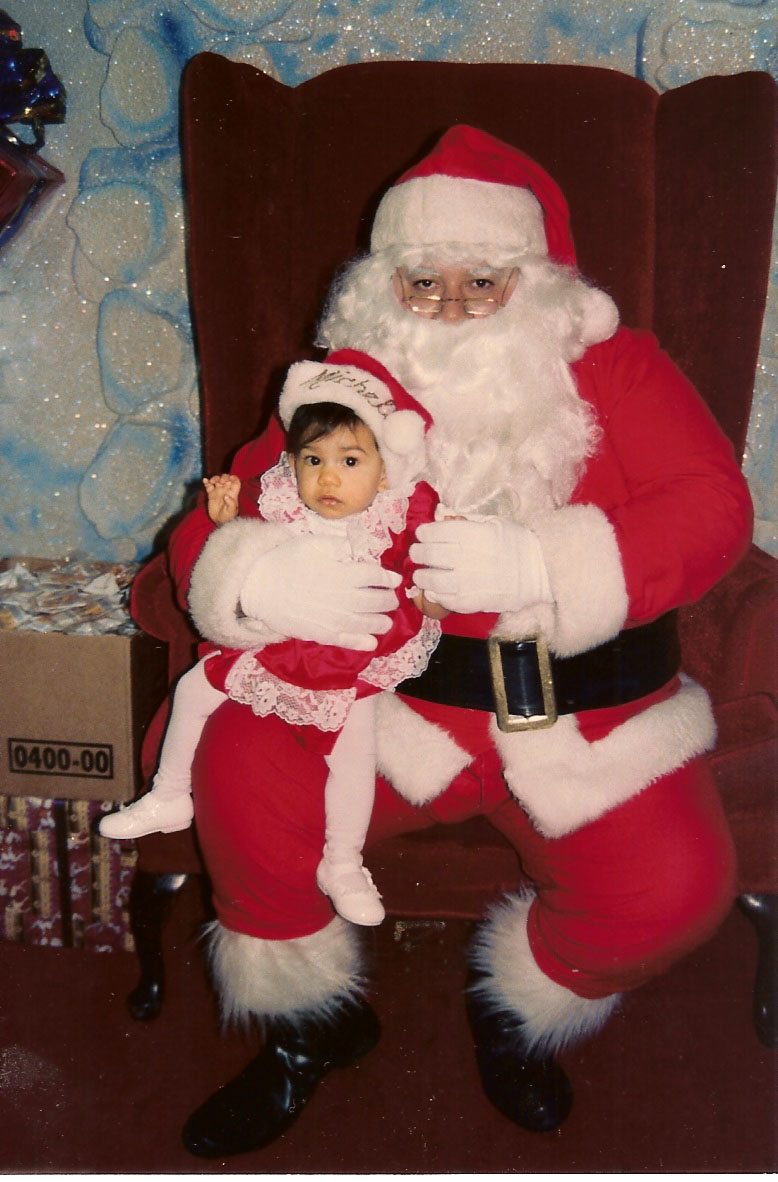 The first picture might be my first one ever with Santa. I was born in April so by the time Christmas came around I would have been 8 months old in December. Of course I don’t remember this and probably had no idea who in the world the bearded guy was but I was surprisingly okay with the whole experience. I asked my mom if I ever cried or freaked out but she said no. I was a cry baby and would cry at absolutely anything (honestly even until now) but with these pictures I was fine. I don’t know how I feel not having a freak out crying photo with Santa but maybe it’s good I don’t. I think the reason I was fine was I was so used t the camera between my mom and dad snapping away at anything or everything I did so getting photo with Santa was a piece of cake. If you notice a lot of my pictures I corporate even at a young age so maybe that’s why I got into fashion blogging because until now I’m still in front of the camera hamming it up. I’m glad I still have my first picture with Santa and though I don’t remember it at least I have the picture and would love to compare it to my future child’s one. 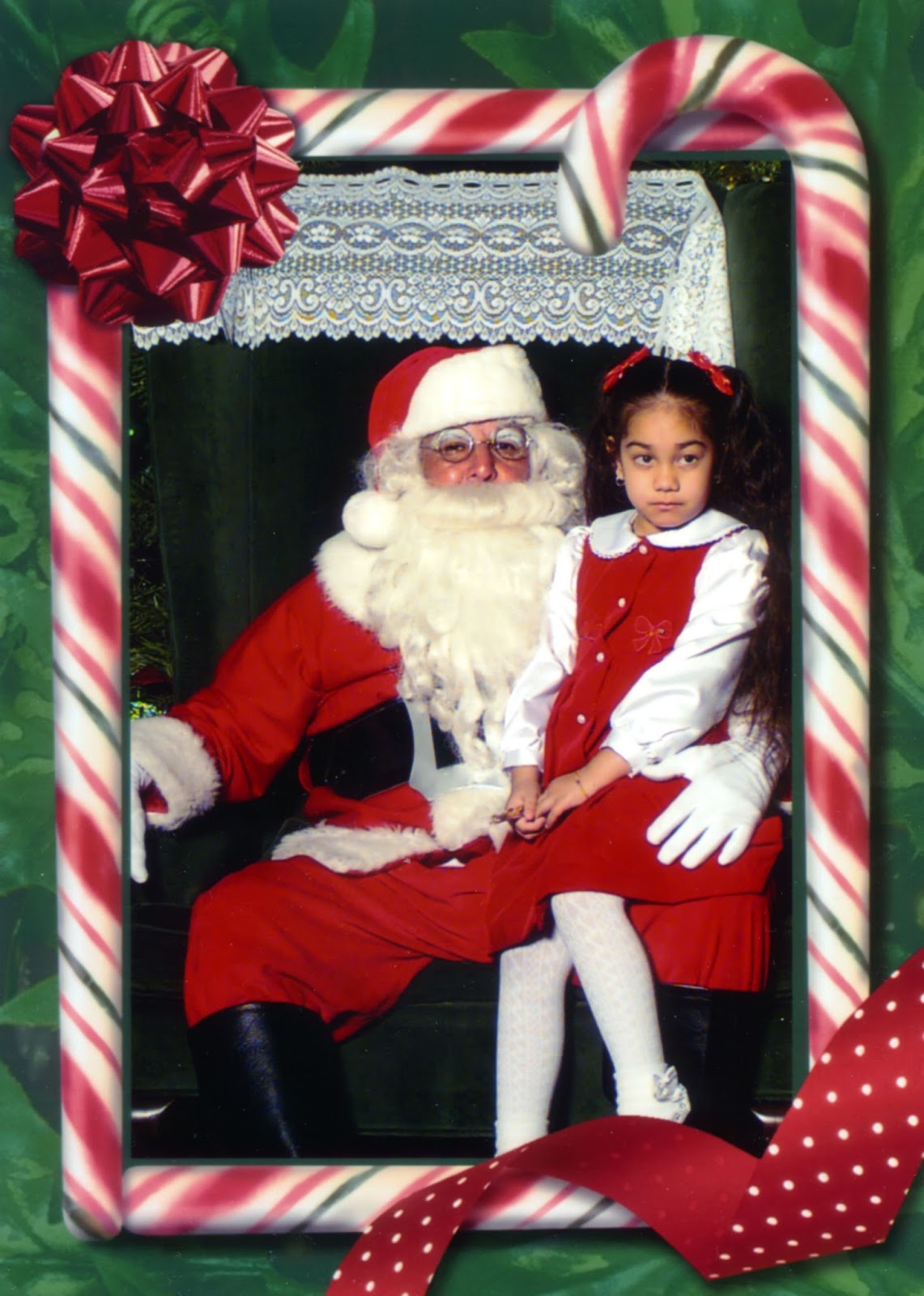 Now moving on to me a few years older. The date on this says it was 1998 so I was already 5 years old and still not too bothered by Santa. I know I have others from previous years but I don’t know where those are so this was the next one I could find. I honestly can kind of remember this but it is a little fuzzy. I think this was the phase where I didn’t want to smile for photos but I agreed to take them as long as I didn’t show my teeth. My dad says this is not the original and he just scanned the photo that was given to us at the mall that’s why it has the pretty frame around it. I do like that though and it is the only one that seems like has that taken at the mall Santa feel to it. I have to say my fashion taste was pretty good and I feel like I don’t regret my fashion choices until my early pre-teens when I was learning to dress myself but my childhood days I had pretty good fashion. My mom always loved dressing me up and didn’t do a bad job. I think I could honestly wear this outfit now just minus the tights and white shoes but the rest is actually pretty cute. 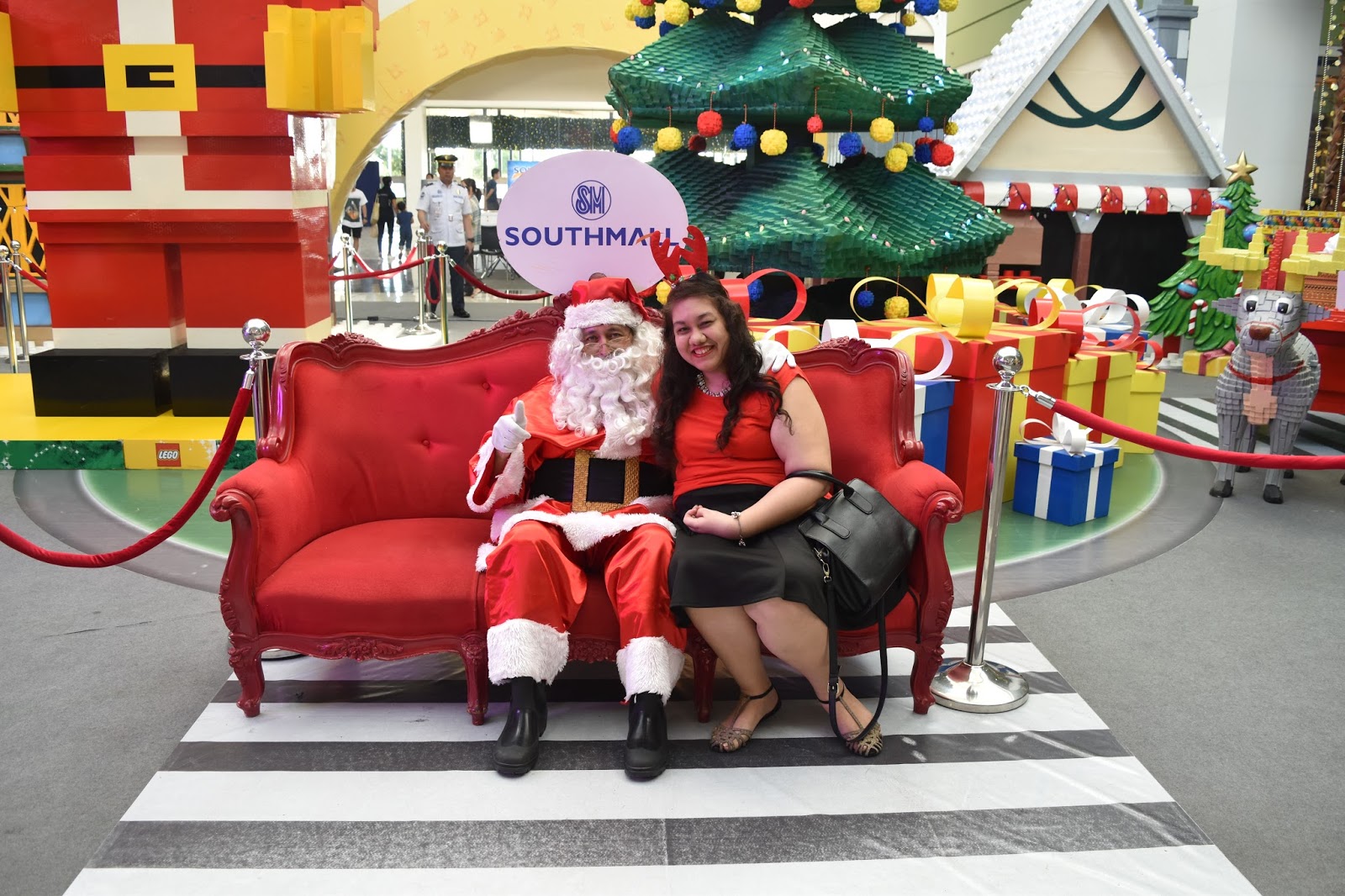 The next one is pretty recent as it was taken last year. I tried my best to find some other ones but once I post this I might find more which I will regret but oh well. It wasn’t until last year where I got back into taking my picture with Santa just because my two year old nephew was spending Christmas and I saw the ad at the mall and thought since I had mine done when I was little why not take him. He was surprisingly okay with his dad and we got the picture. I of course got mine done too and I love how I made it a tradition to wear red every time I got a picture with him. 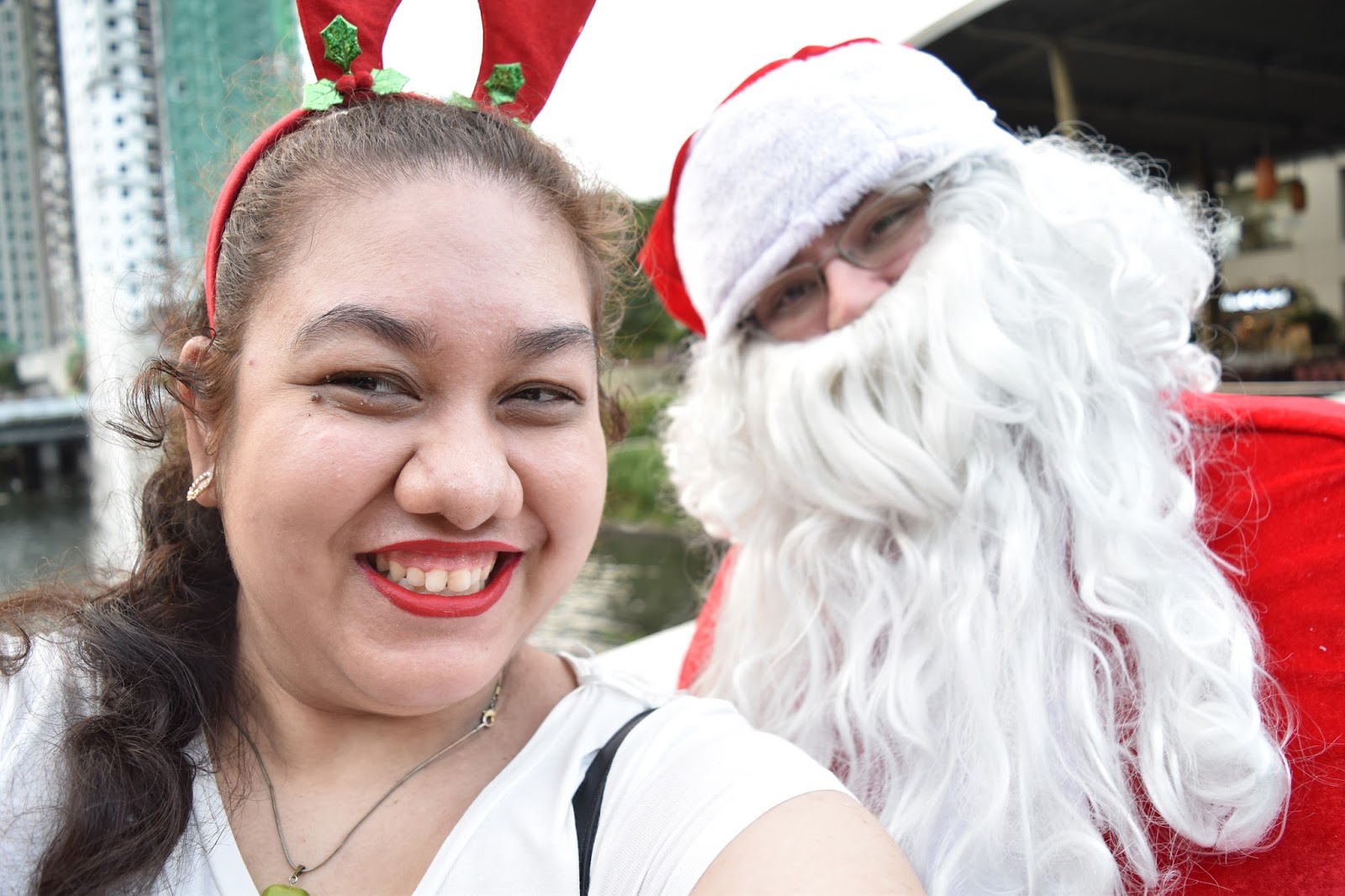 The final photo is from this year and to match the modern times I didn’t just get a picture but I got a selfie with Santa. I find that so cute how times have changed to taking sitting on his lap, to sitting beside him to now getting a selfie. It’s so funny how much joy I still get when I saw him. It’s like I’m still a kid and that magic is still there. I might have learned the truth and yeah I know the story behind it but something in me still believes the magic of Christmas and Santa will still be there always. Maybe I will keep up the tradition and do it again next year and the year after that. Oh and yes I still wore red in the picture but you just can’t see it.

That’s it for my little throwback Santa pictures and story time. I hope you enjoyed this and if you happen to get a chance with Santa don’t be shy and do it no matter what age you are. I still enjoy it and though I put it off for some years because I felt like I was already to old and grown up I think I regret that and should just enjoy it for the holidays. I celebrate both the commercial side or Christmas and the religious side so I know the meaning and all that but I still wanted to show you a few pictures and cute little memories. I do have my Vlogmas coming out tomorrow so you will see the behind the scenes of this year’s picture and I even get Santa in the vlog. I also post the 2015 version vlog as well in Vlogmas week 3 so come back tomorrow on my Youtube channel for those videos. I think that is it and hope it got you into a festive spirit. Also can you believe it is only 1 week until Christmas. I sure can’t and seem like ll of this has gone by an this time next week we will all be doing our own holiday things. But for now we can only countdown. I guess that is it for today’s Blogmas and I will see you again tomorrow!

Only 7 days until Christmas!