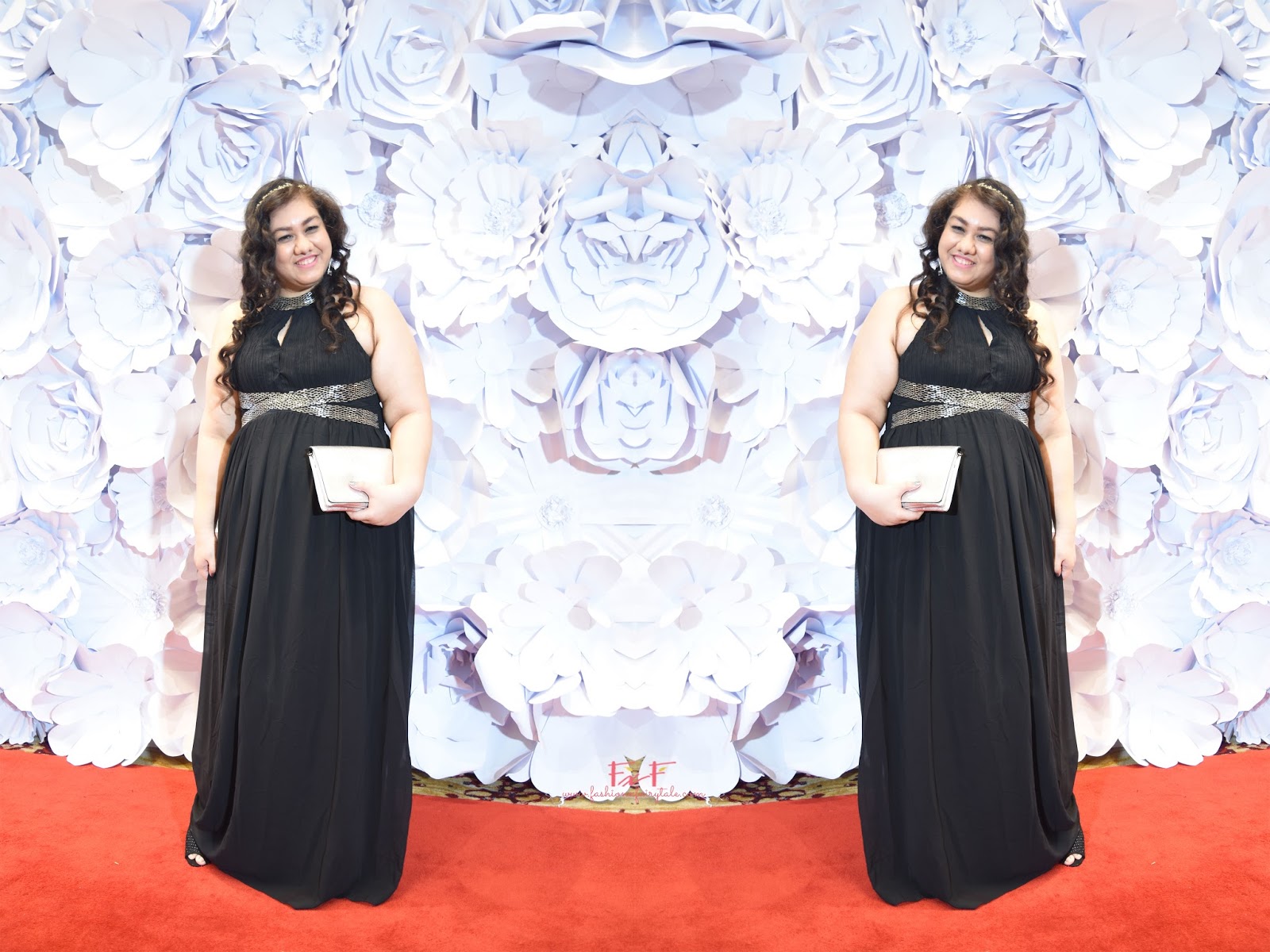 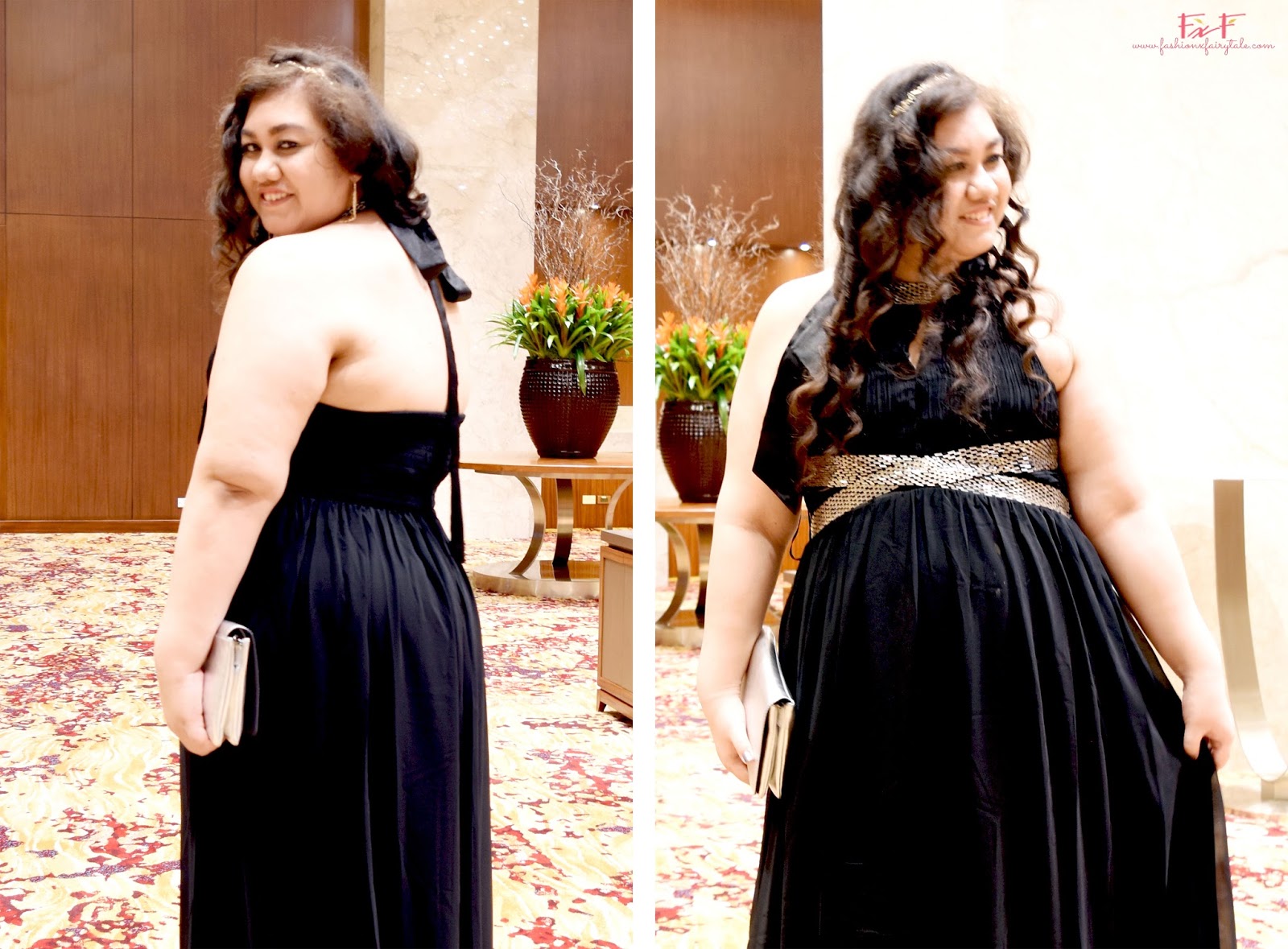 Happy Wednesday!This is quite an interesting blog post for me to write. I wanted to show you everything I was up to when I went to the Ebloggers Ball. I show you the event but more importantly what I wore. So I’m just going to keep the intro short so I can babble on all about all of it. This isn’t actually an outfit of the day it actually is an outfit of the night which I don’t think I’ve ever done. I wanted to show you what I wore to a ball now!

For my outfit or do I even call it an outfit at this point so instead I’ll say what I wore to the ball is this long gown from Fashion Forum. It is the name of the brand of dress and I got it at the SM Department Store. It took me quite a while to find a dress for the event and I went to several places to get one I liked and felt good in because that’s what matters to me. I went with a black one but I went through a few like white and gold but it turns out I liked this one the best. This is sort of a Greek inspired style I went with I think. The detailing is silver beading and has a keyhole in the chest area and the neck has the same detailing so I didn’t need a necklace. My favorite thing is the ribbon to tie it because I do love my bows and wherever I can have one it makes me happy. Then of course it is really long and I love the flowy material to twirl in and pose with as you can see. If I had more time I would have a dress custom made like I do but it was last minute so going to try on dresses was fun but stressful too. I do need to get it tailored to fit me better as the top portion is far to big and the bottom is too long for me even though it doesn’t look like it. Overall I was really happy with the dress and it made me feel like a Greek goddess. As for the accessories I kept it pretty minimal and since I wanted to have the dress as the focus. To match the beading I went with a metallic silver bag I got the day before at H&M. I used it as a clutch but it has a strap inside to use and can be very versatile for everyday or dressed up evening bag. The head band is gold and since I heard the theme was black, white and gold I tried to incorporate it and again with the Grecian vibes it has leafs on it. The earrings are gold and diamonds in a diamond or leaf shape I’m not sure. I rally liked them and wanted to have long dangle earrings and again they are from H&M I bought it the same time as the bag. I kept it simple and only had a few pieces when I’m so used to having a lot more. All that was left is my shoes which you can’t see but they were the same ones I wore in my last outfit. 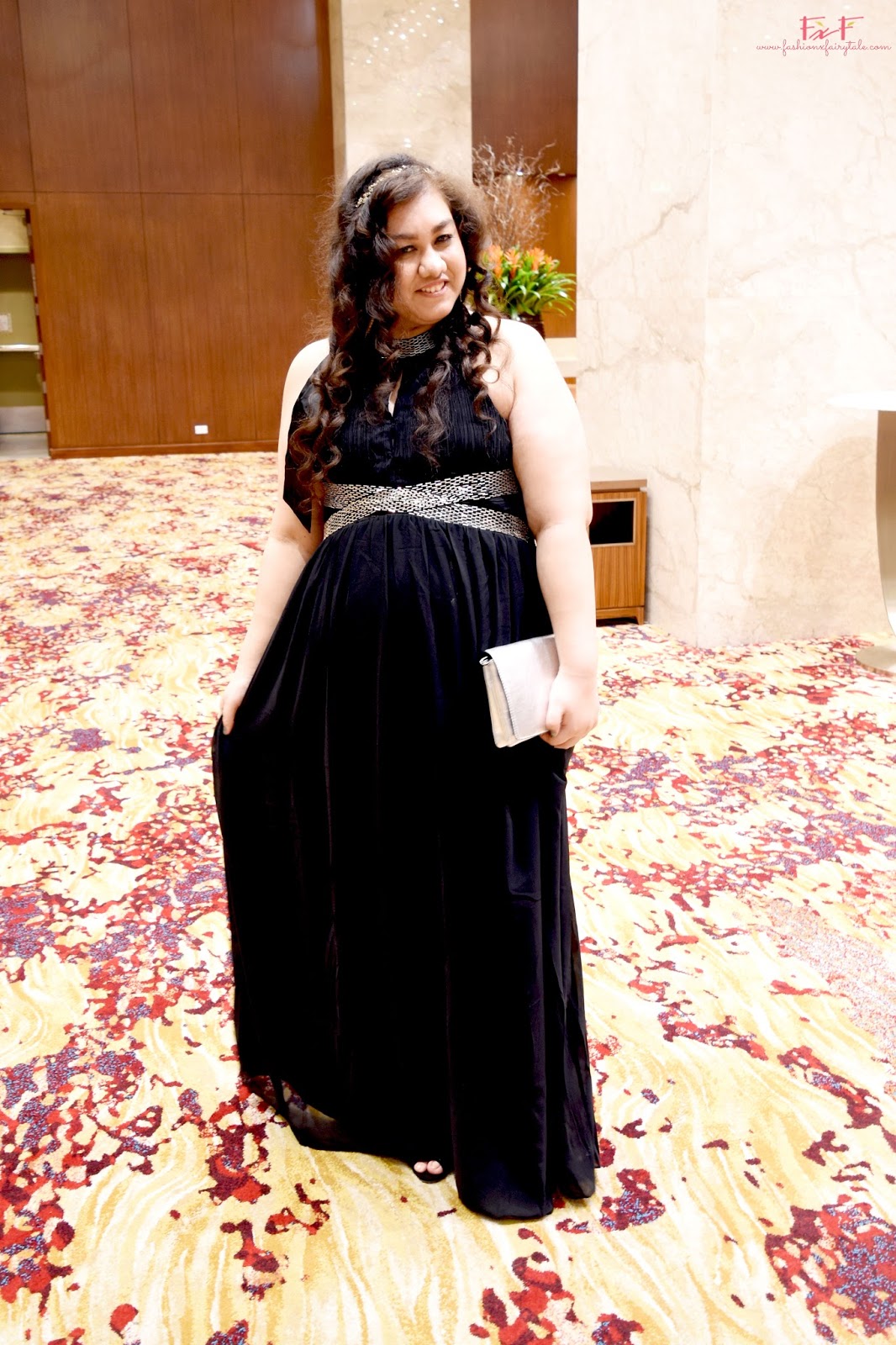 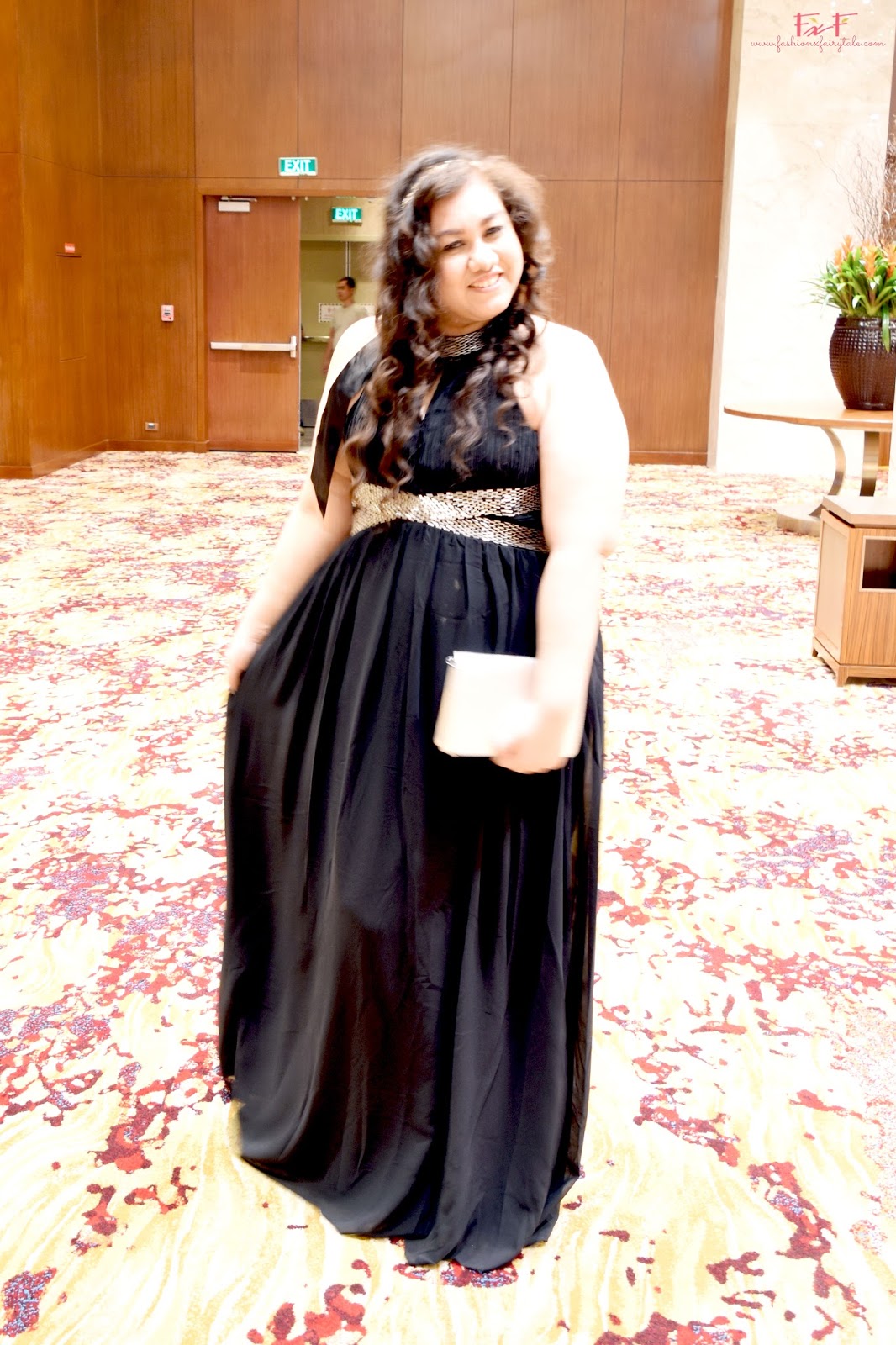 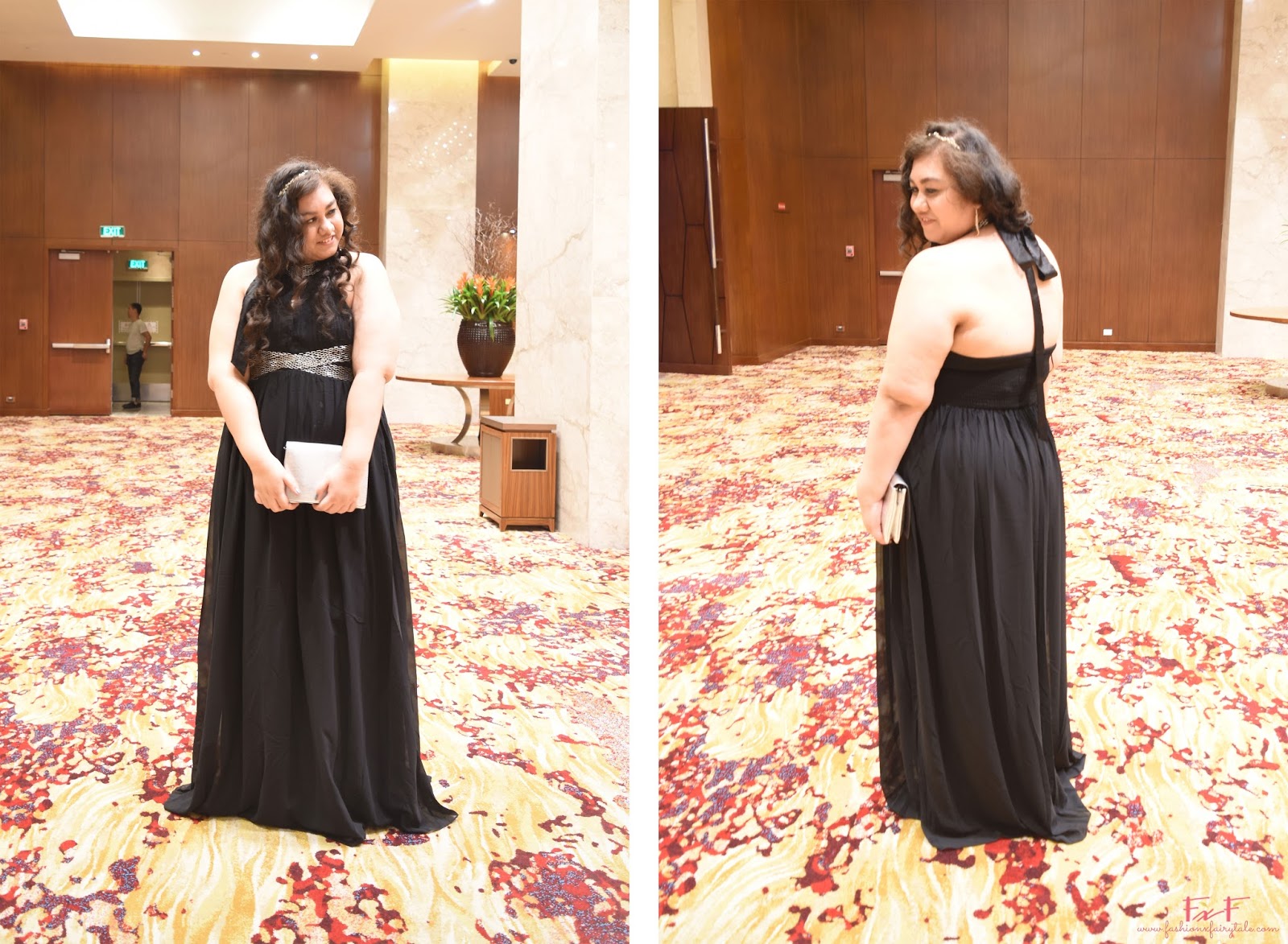 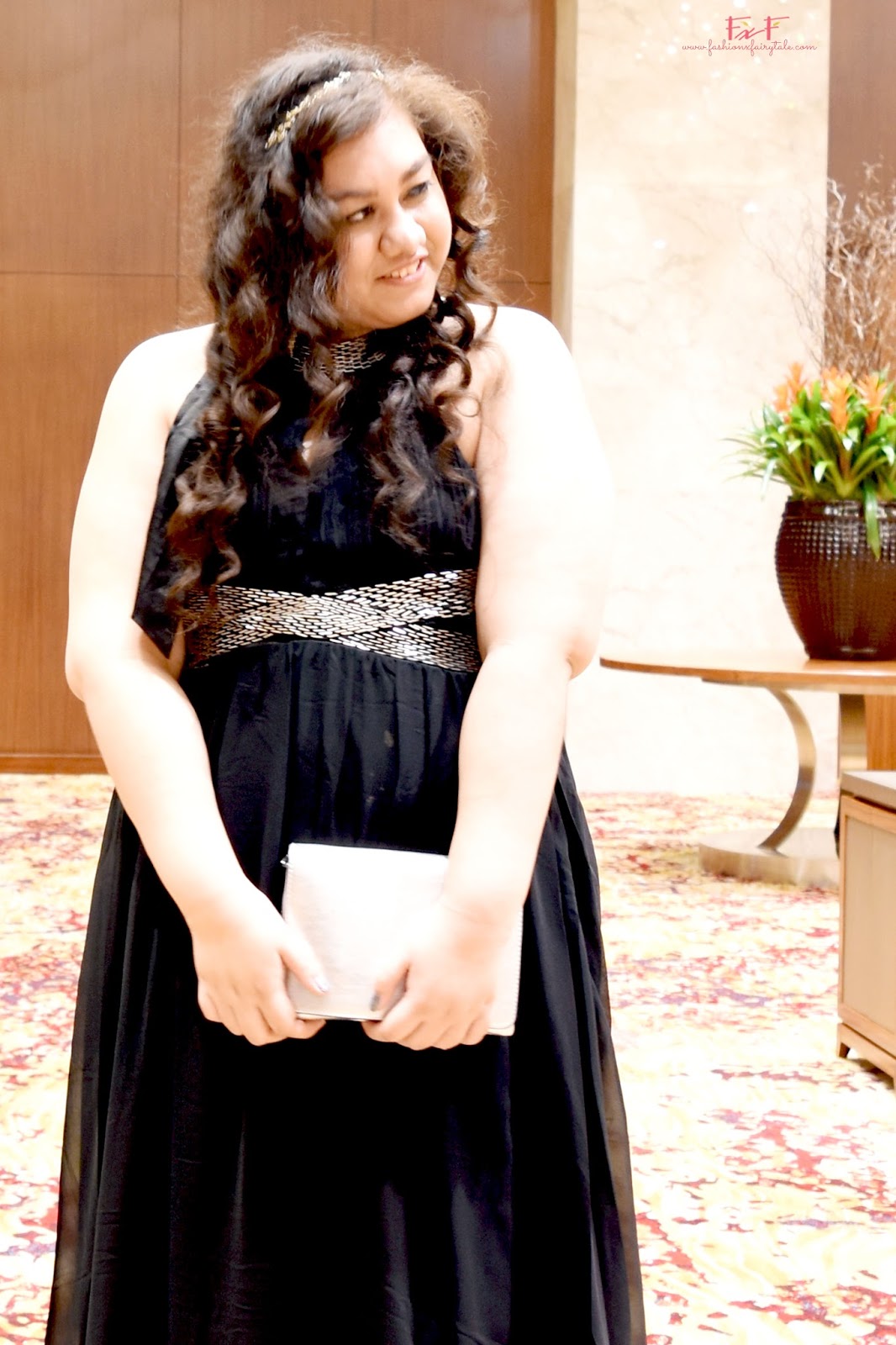 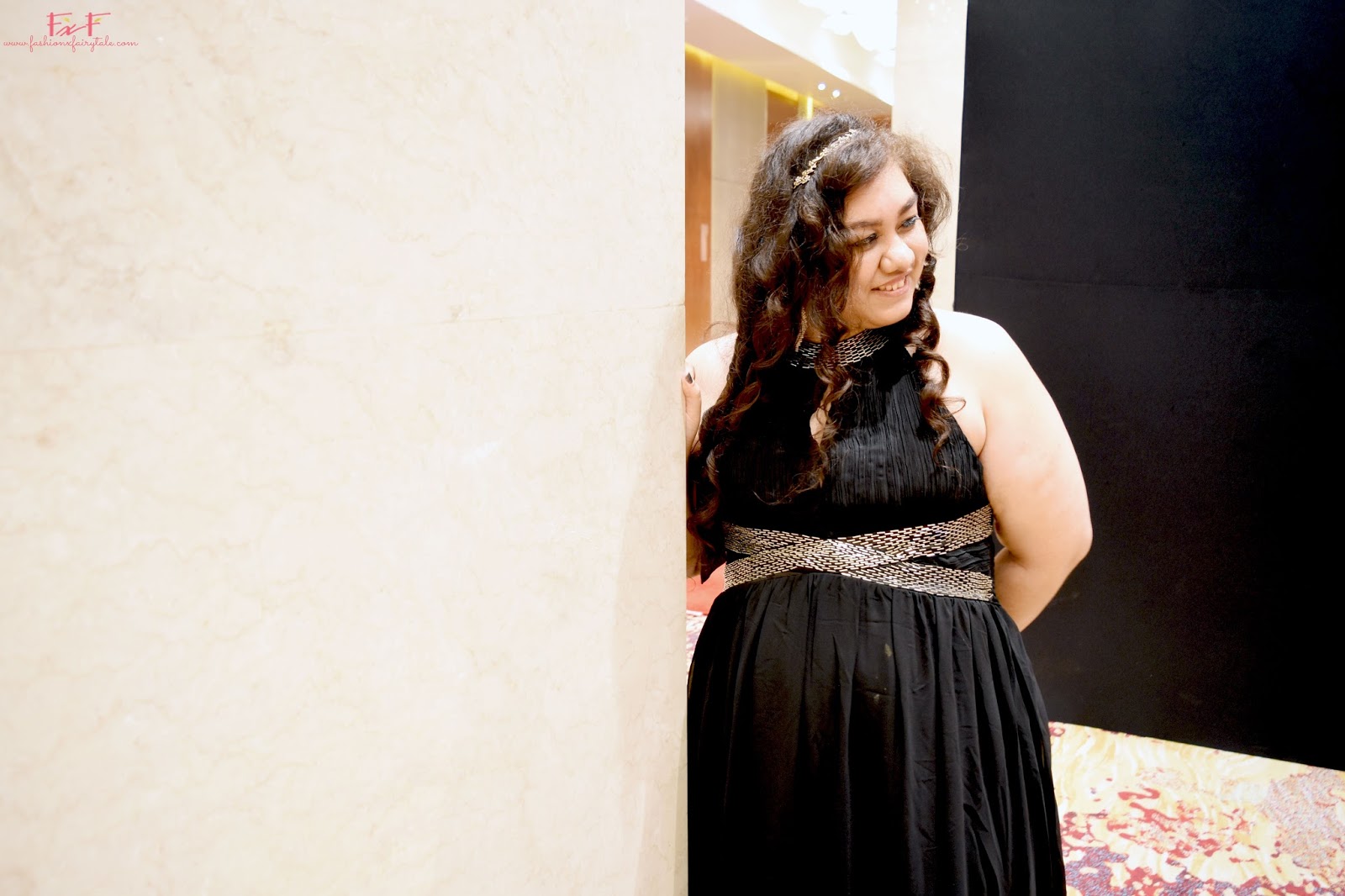 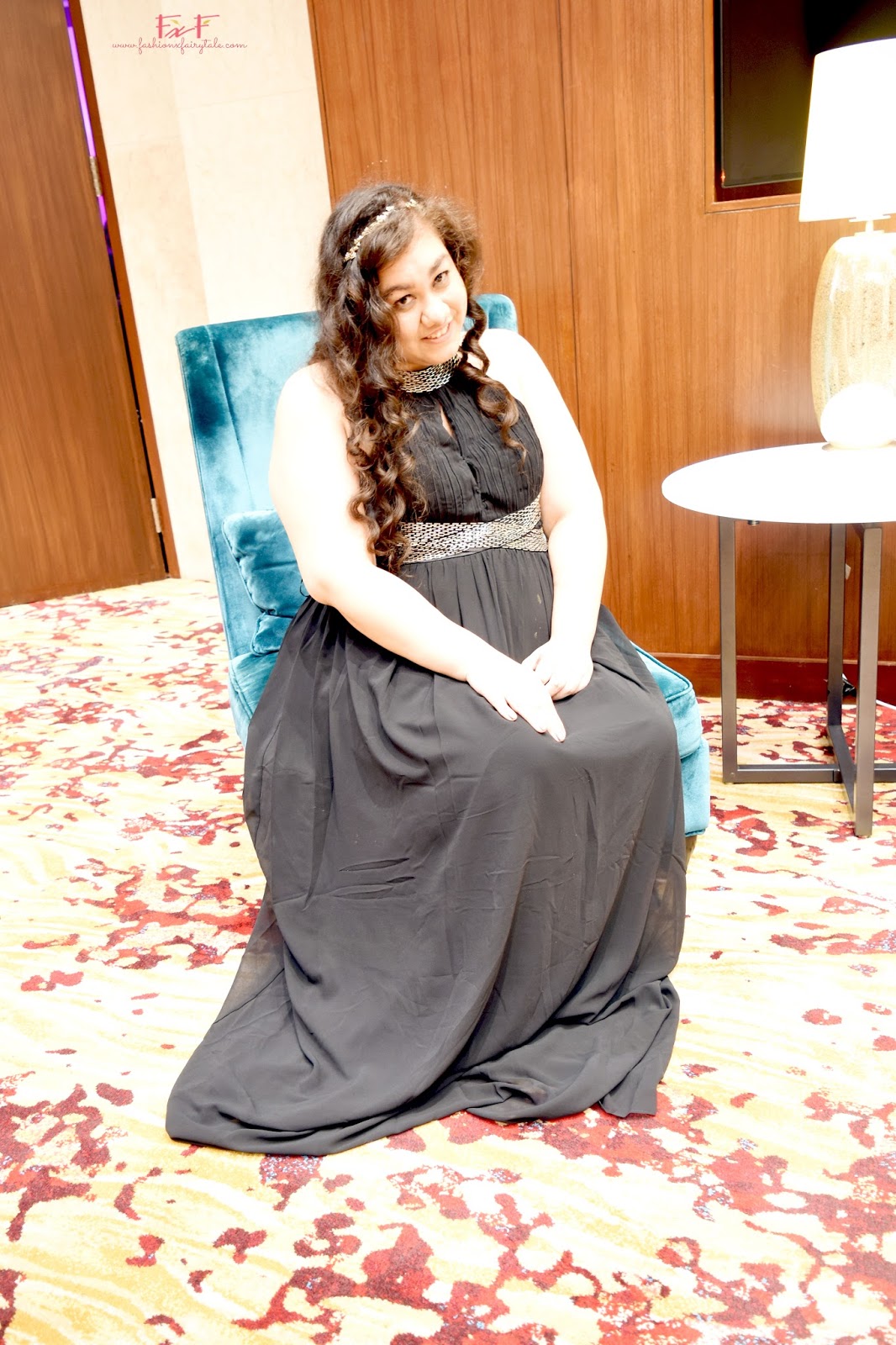 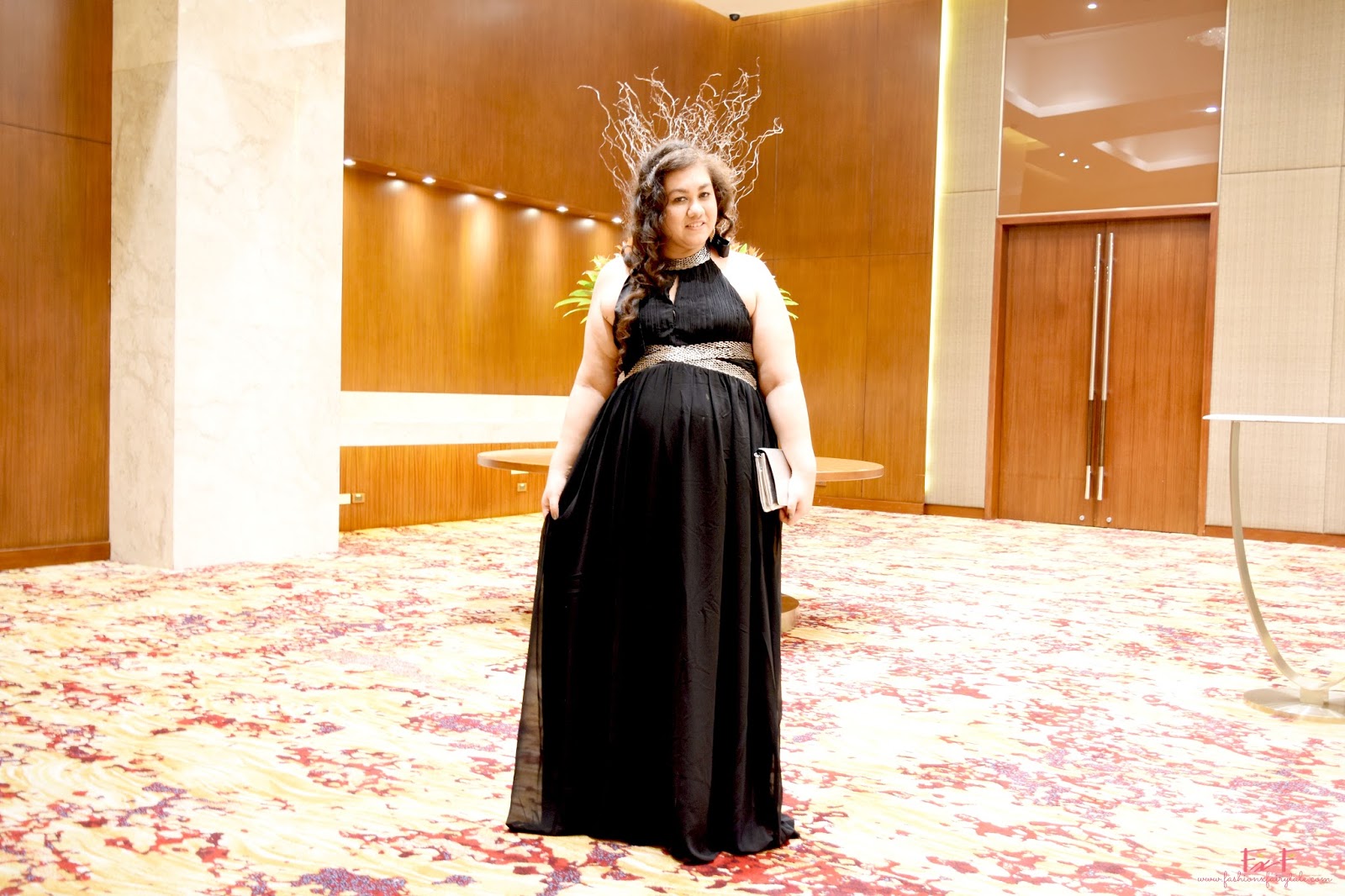 That was what I wore to my first red carpet and formal ballroom event! As I said it was my first time going to an event like this and even now I’m still in amazement of the night I had. I have a vlog of the day here or below and while editing that I just wanted to relive it again. Sometimes I have those moments which I just wish could happen again. I guess this is why people do vlogs and take so many pictures to keep that moment forever. I made two new blogger friends and if I wasn’t that shy I probably would have made more because the whole event was literally a (ball)room full of bloggers. Maybe next time if I get another chance I will try but with my extreme shyness it is hard meeting some in real life instead of talking with them online. I have overcome a bit of my shyness and try so I’m proud that I’m slowly putting myself out there. Other than that it was a fab night and so many things happened and I’m so glad I got the opportunity to do something like this. I would have never thought this little blog of mine and now Youtube channel would lead me to so many things I never would have imagine. I don’t thank you enough so thank you so much! So enough sappiness I’m now moving on to the event portion and give you a little rundown of the evening.

Ebloggers Ball – Where I Went: 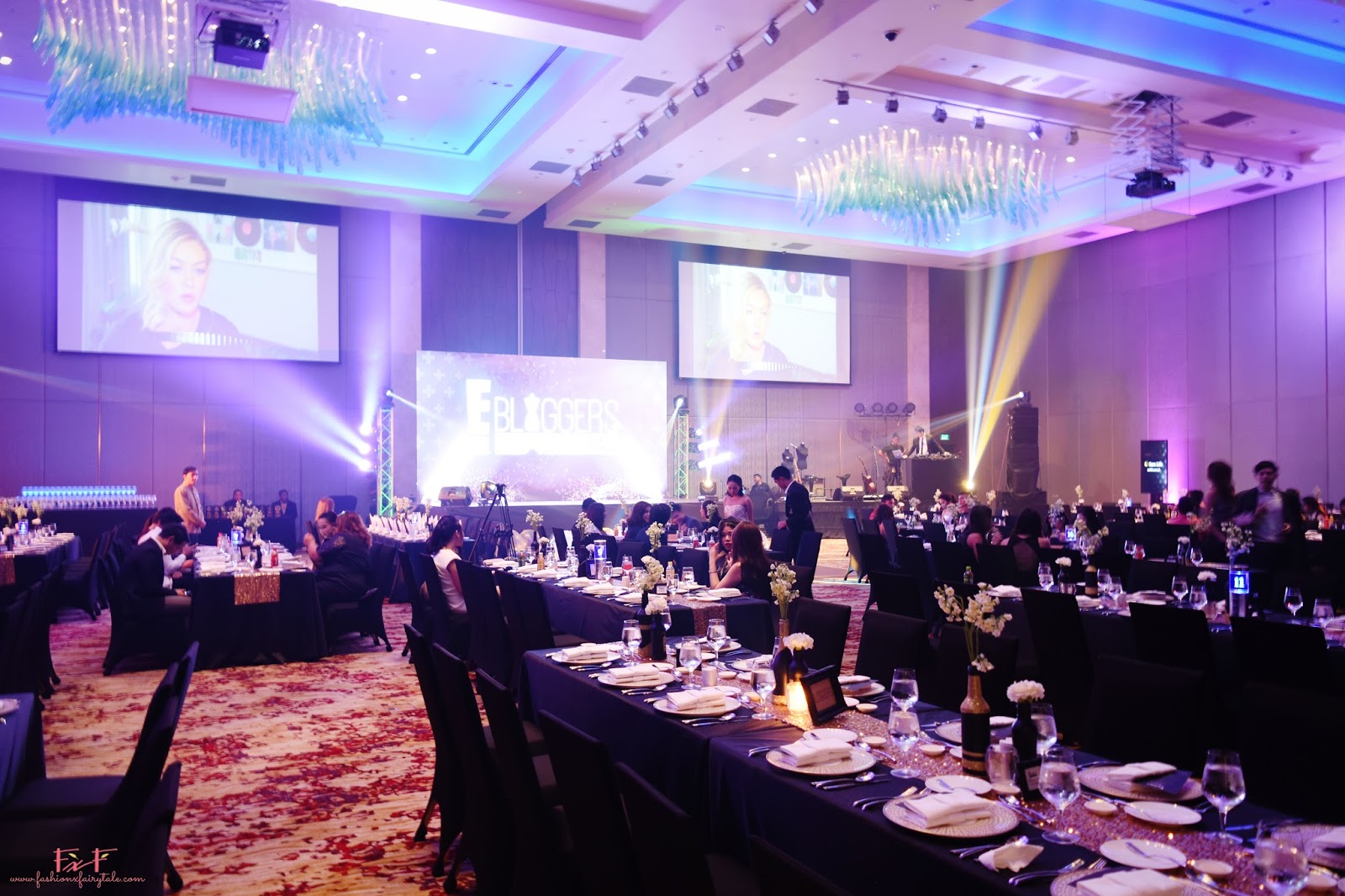 I was invited to the first ever Ebloggers Ball by E! Philippines on September 29, 2016 at the City of Dreams Manila in Pasay. The lovely people at Clozette sent me an email and I was quite excited to go to this. It was absolutely beautiful and it was my first time to experience something at this level. It was so amazing to be in a room full of vloggers and bloggers and just go social, have dinner and be awarded for our achievements. There was a red carpet and a couple booths set up as well. The ballroom was gorgeous and decorated so pretty too. so the night pretty much went as followed: red carpet pictorial, socializing with bloggers, dinner with a performer sing while we dined, a program where Nicole who is a blogger as well and I met before hosted, then they introduced new shows on E! Network and the cast was there as well and then awarding for the best dressed and awards like that at the end. Then there was a little party in the end. That was pretty much it for the event with my little summary of the evening. 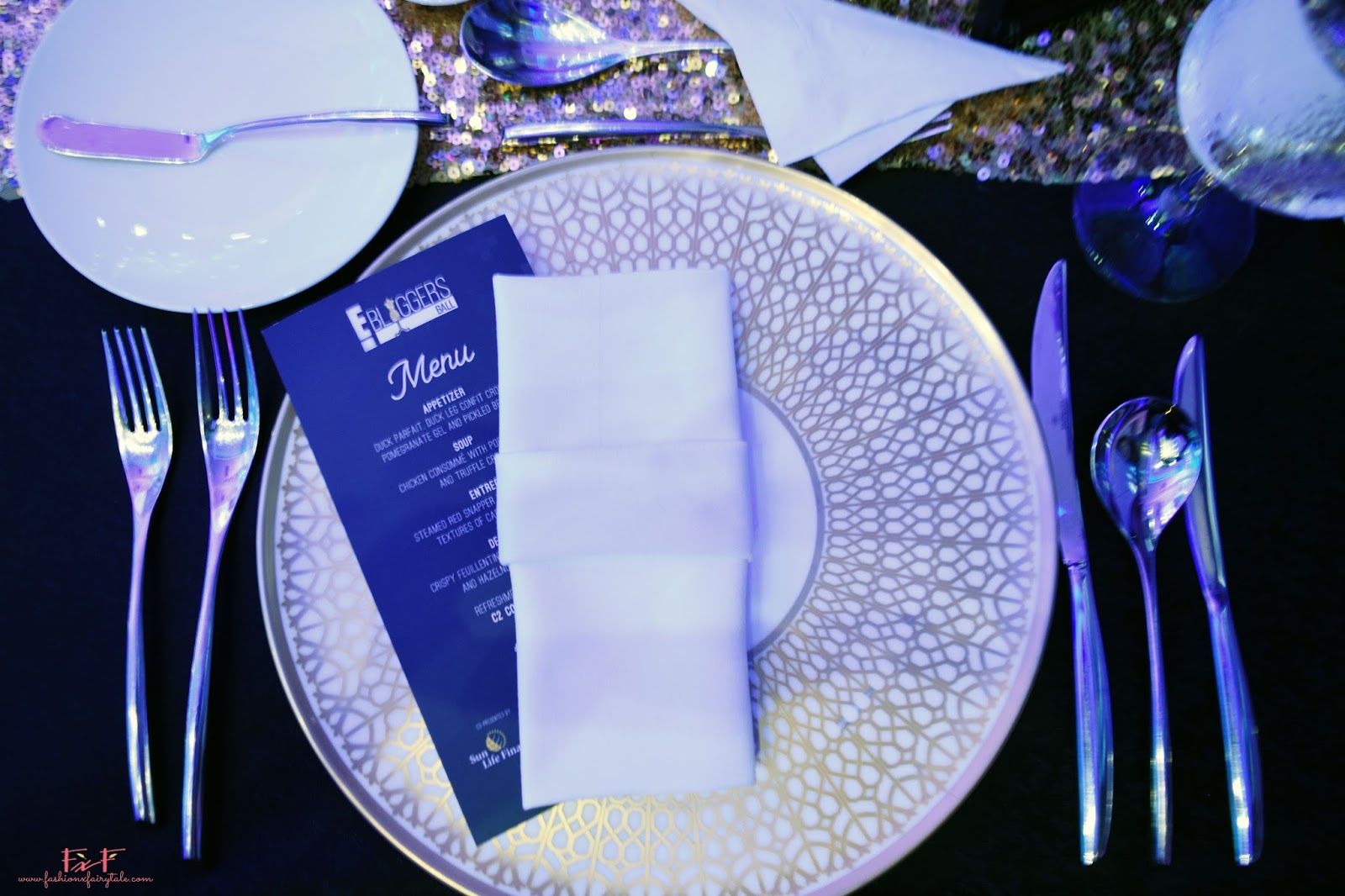 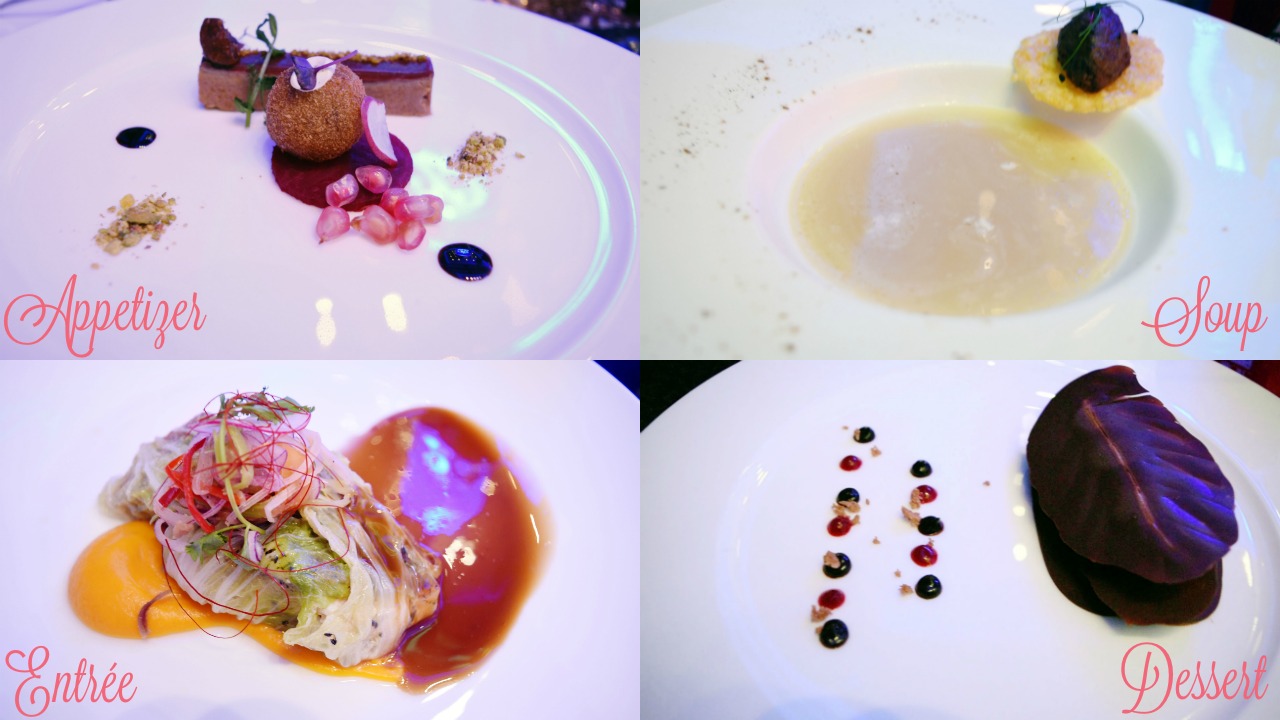 Moving on to the food. It was a four course meal and of course they all the fancy silverware. The menu was laid out with the napkins and it was really nicely presented. The waiters even put the napkin on my lap and served out each course to me. I’ve never been to something like this and my prom wasn’t this fancy so I really felt like a queen during the night. I did go to a gathering in college to learn etiquette but I still had to figure out which fork and knife to use. At least now I know in case I go to an event like it again. The food was top notch and it was present lie I’ve seen in movies. I’m not sure what is what but I got to try new foods but I did enjoy the soup and dessert and the basket of bread too. Th City of Dreams did a great job and some lovely prepared food. 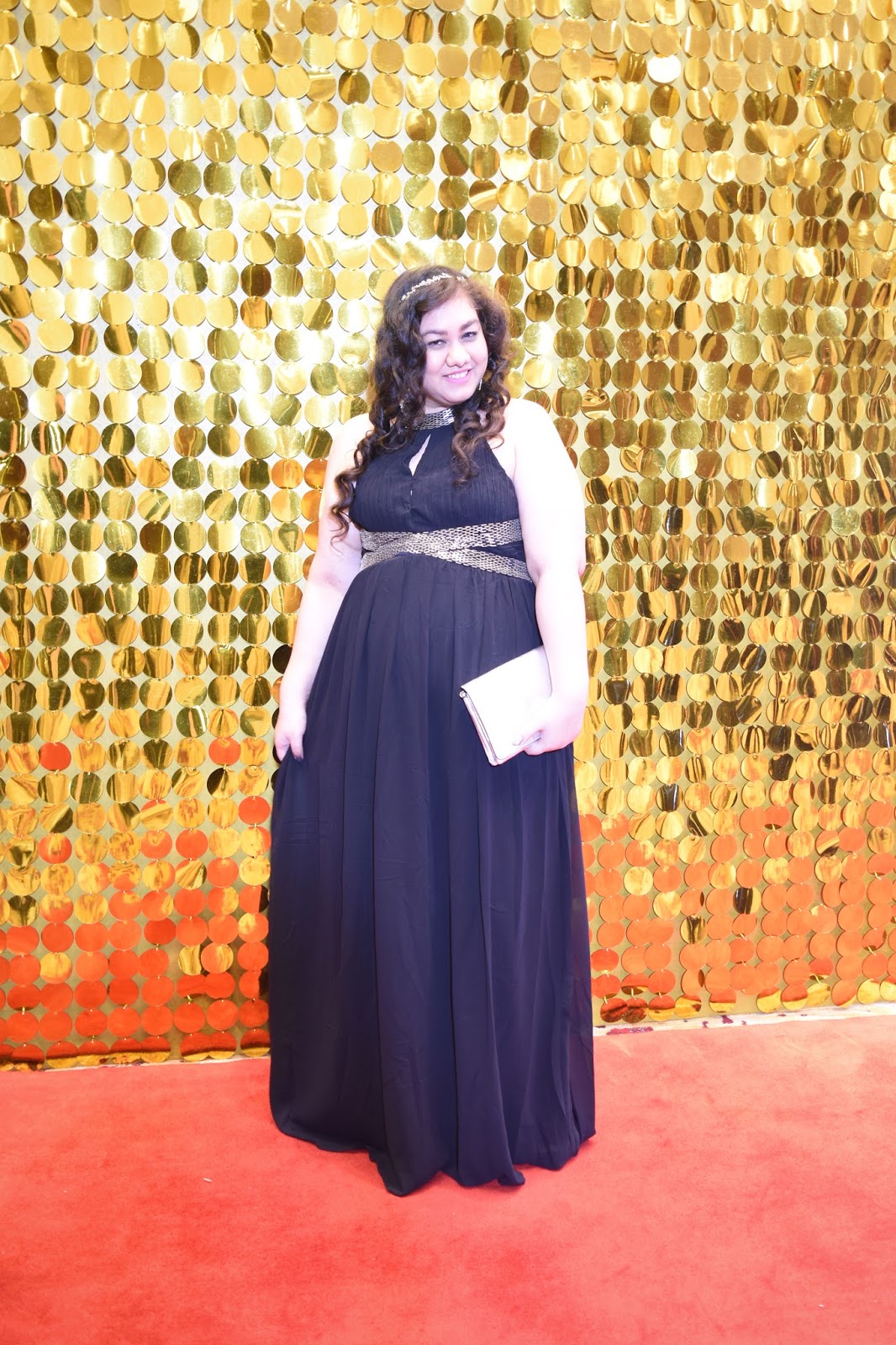 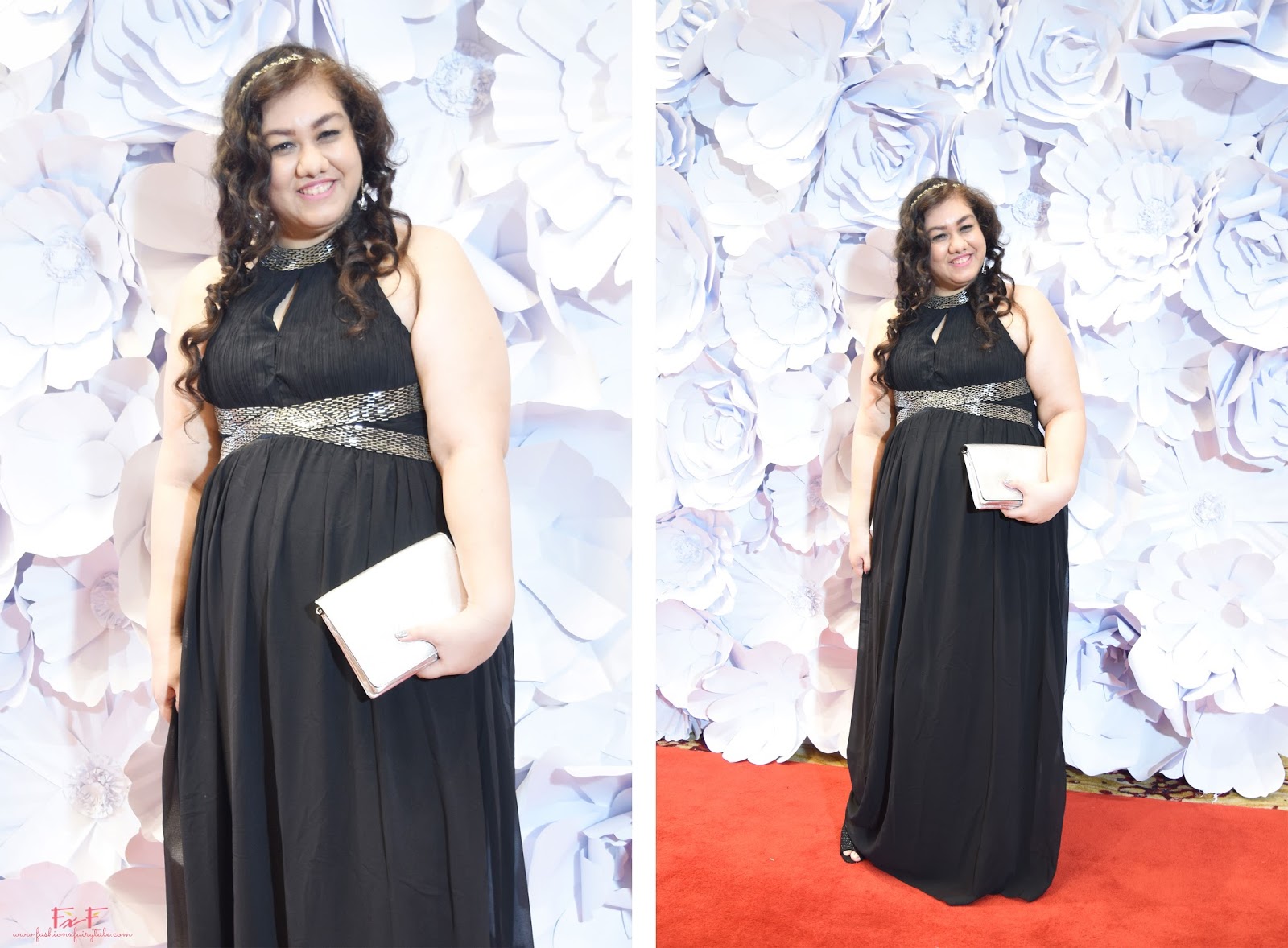 I never thought I would go on a red carpet and pose for pictures. If you told me that maybe one day I would I would have said no since I am so shy and would not know what I would go to one for but here I was trying my best and pose. I can cross that off my bucket list which is quite amazing if I say so. They had a few back drops so the first had the sponsors, then this pretty paper rose wall and then this gold one too and you know I had to take pictures at all of them. Here are a couple red carpet pictures. When you are in a room full of bloggers there are a million people with cameras and taking pictures trying to get the perfect OOTN. I was the same and couldn’t seem to get enough myself. The other good thing is everyone gets you by taking all those pictures and having other bloggers take your photo and knows what you want. 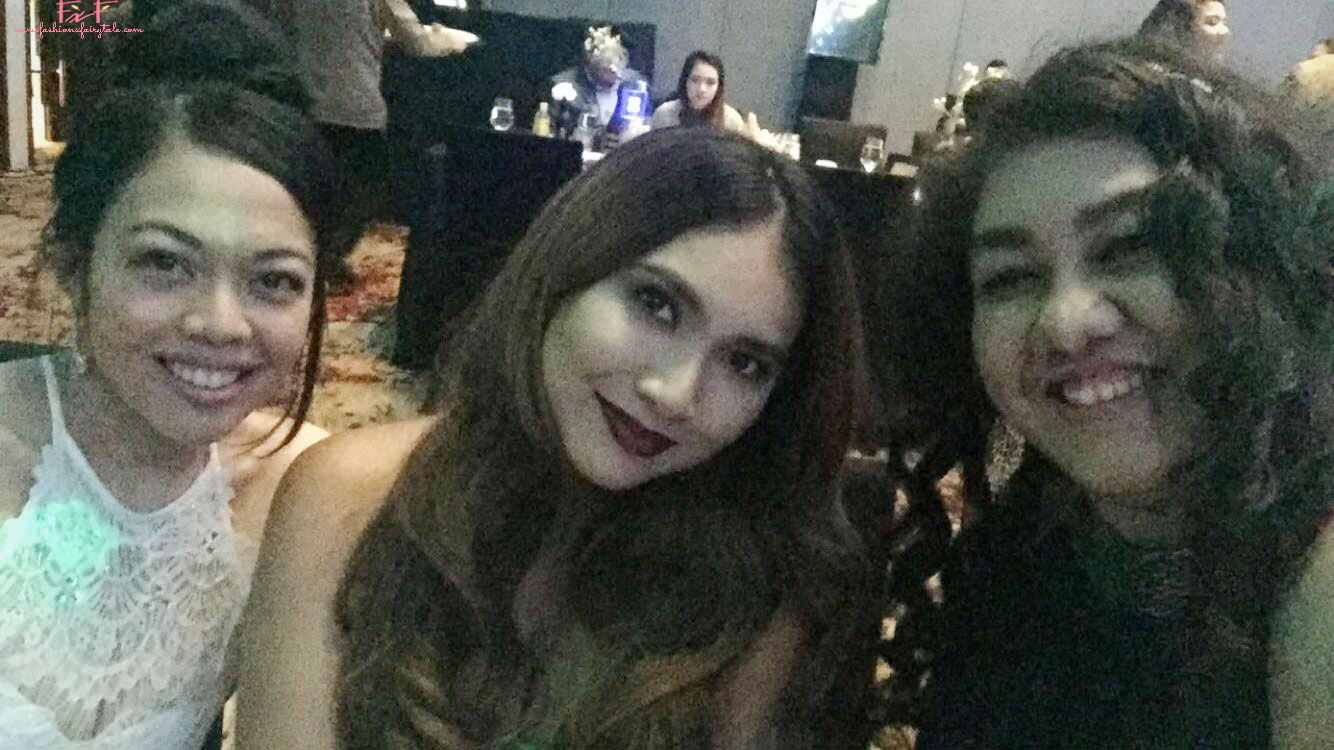 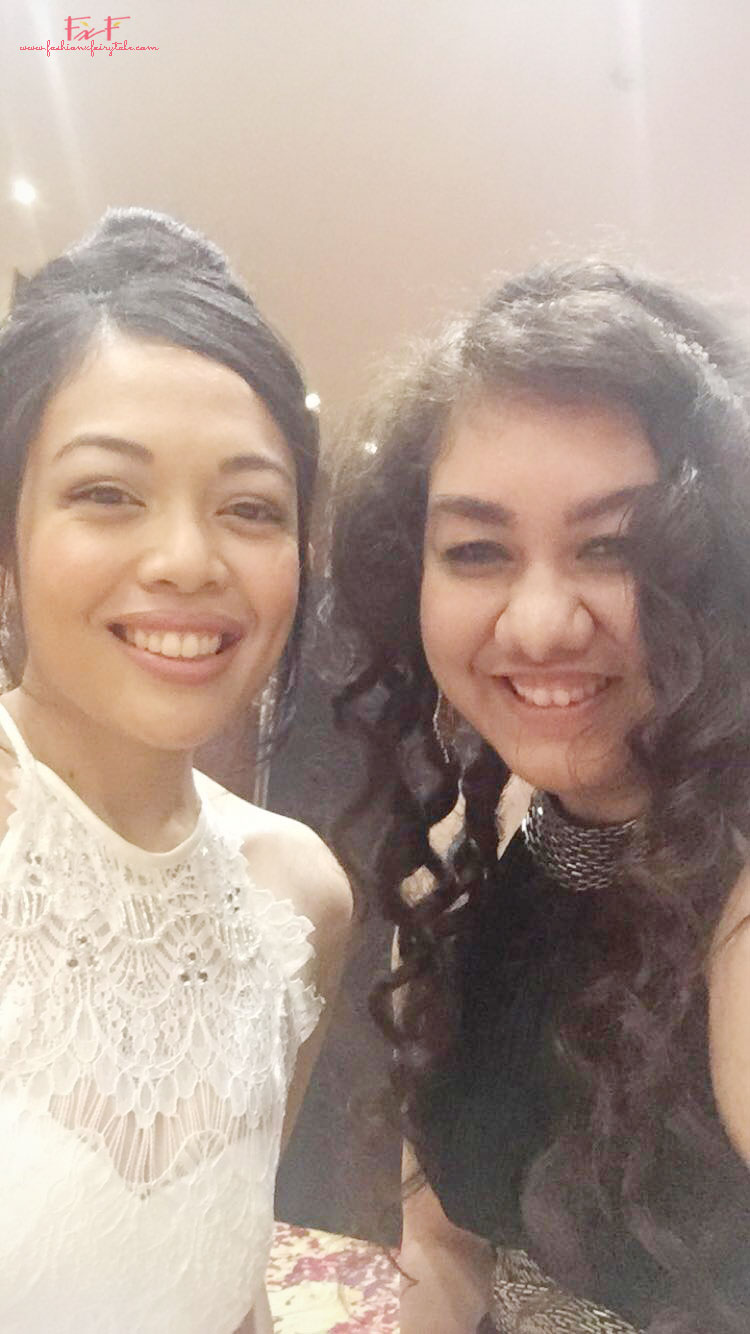 Lastly since the even was all about bloggers I’ll show you everyone I was with. These were off of snapchat and my phone but I thought to include them. First is Shayne who I already met before who went to Benefit and met Heart with me so since she was going I knew I had a friend and didn’t feel so lost. If you don’t her blog is here and she just posted her blog post about the event. Then we met Czari and sat at her table She was really nice and I loved her makeup from the evening. Her blog is here and her youtube channel here. I also met Mari who was really nice I just didn’t get a picture with her because I forgot. I took so many but it is so hard to keep track since I was attempting to vlog, take pictures, do snapchat and update all the social medias. Literally everyone was on their phone just doing their own thing in between everything. Of course having social media influencers everyone had to but no one minded because everyone pretty much understood. Next time I might have to make more an effort but I did recognize some bloggers but it is so intimidating for me. Hopefully I can make more blog friends.

That was it for the what I wore and where I went portion of the Ebloggers Ball. I had an incredible time and I still can’t get over how nice of an evening it was. I’d love to do it again and get glammed up since I hardly get to do that. I hope you enjoyed reading this but I have a little vlog and more look into the event. This was such a fun post to write and show you the pictures I took of the night. Let me know if you enjoyed it as well and if you’ve ever went to an event like this. Thanks again Clozette for inviting me and if you are on that site you can follow me here.

What kind of gown would you wear to a red carpet/ballroom event?