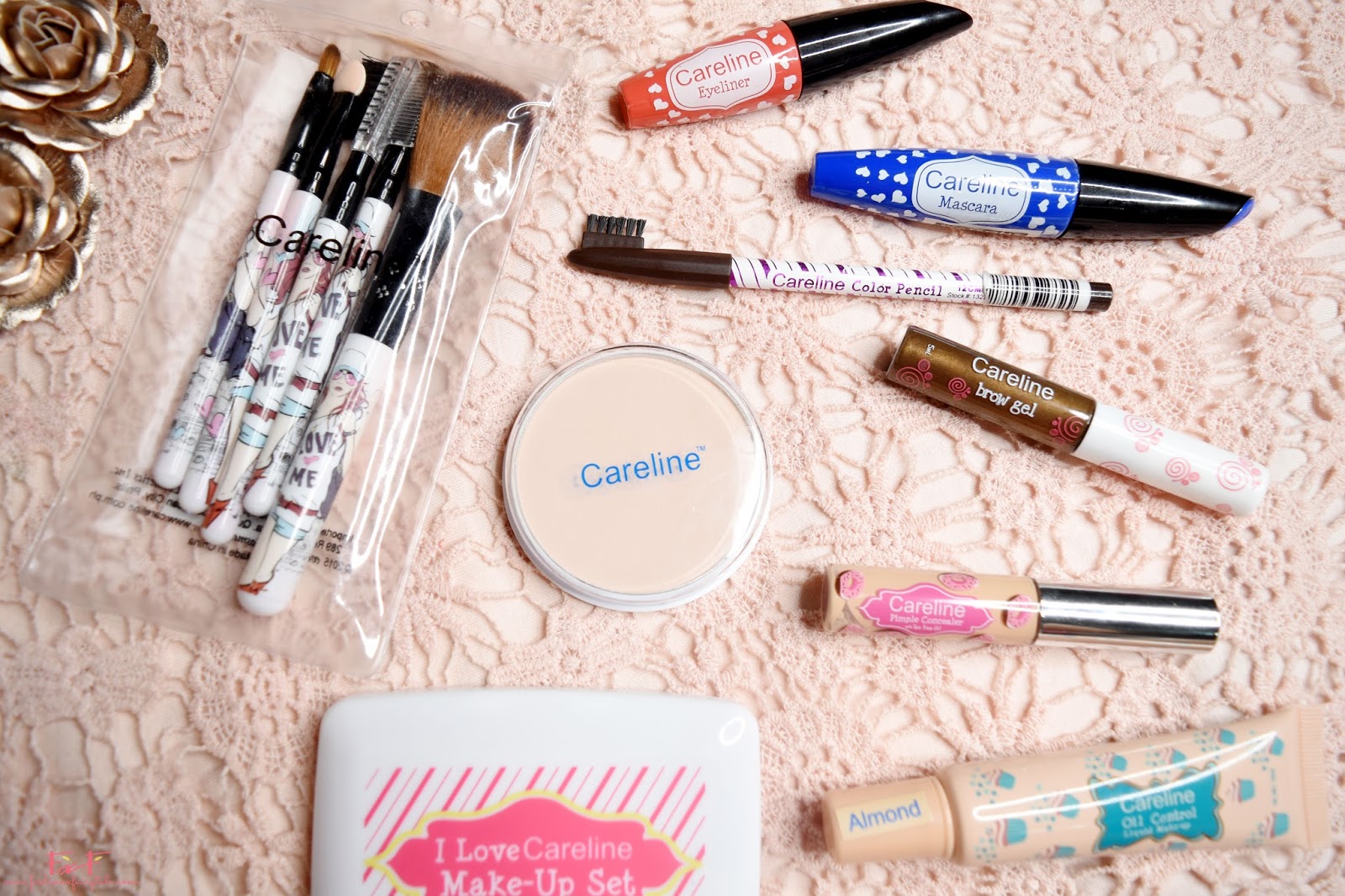 Happy Friday! I’m back with another brand focus and it is from Careline this time. I did a simple look and tried out a few of their products to create a full face. I give you my first impressions too and what my intial reactions were. I filmed it again so you can watch it below to see how I did this look or read on. You can go and see my last brand focus here where I show you Ever Bliena makeup and a more glam makeup look I did with it. So to keep this short I’m just going to jump on into the post.

To start off with the base I first went with the Careline Oil Control Make-up Foundation in Almond. and first off the color as far too light for me but in pictures and videos it seemed a little okay but in person it wasn’t the right shade. So getting the color match out of the way I can give my thoughts on the consistency, pigmentation and how it blends in. I find it quite nice and it went on smooth and blended in and gave a flawless finish. The concealer I ended up using was the Careline Pimple Concealer in Oriental and again not the right shade. It was too yellow and light and that does not do any justice for my under eye circles which speaking of it claims to be a pimple concealer and I don’t have any to cover up I didn’t use it for the purpose it was intended for. It has a doe sponge applicator and makes it easy to apply. It was quit creamy and it takes a while to blend with fingers but a brush or sponge might help that. Lastly I used a powder to set it and I used the Careline Oil Control Face Powder in Honey and I feel like it is the same as the EB powder in honey as well. It has the same feel and blends in the same way and has the same color I think too. It did it’s job and set everything and made the foundation more matte and took away the dewiness of the base. I was fine with the powder and it was great.

The eyeshadow palette I used was the I Love Careline Make-Up Set 1 since it came with 9 eyeshadows in a mini square. It has pretty bright colors and has a somewhat colorful shades so it can give a pop of color and not so much everyday eye looks unless you use the three over and over. If you are looking for more bright and colorful looks it can be a great palette. The dual ended brush was useful as I used the angled end got to add some color under my bottom lash line. Moving on to mascara I went with the Careline Mascara and no it isn’t blue it is the packaging. It has a strong chemical mascara kind of scent which I am never a fan of and the wand isn’t that great but does the job and gives nice fluttery lashes. It doesn’t transfer the smell so just when you open it up and I like that it doesn’t clump or create spider lashes so great in my opinion. For the eyeliner I used the Careline Eyeliner and this was actually really good. I liked it and it was quite pigmented and very black and doesn’t smudge as much and can go on so easily. The tip has an oval shape and it totally help to get a nice straight line. It has the same scent as the mascara and so a warning with that too but doesn’t last long.

I’m going to show you the eyebrows since it cut out in the video. I first used the Careline Color Pencil 12cm in Brown since I wasn’t unsure if it was a pencil eyeliner or brow pencil but since it has a brush I used it for the brows. It turned out okay but it has such a thick pencil that it gave big strokes instead of hairline strokes so I did go a little over board and made it a little thicker than my natural shape. I also set it for once and used the Careline Brow Gel in Chocolate. It was my first time using a tinted brow gel and tried to apply it as best as I could but it made my brows a little too dark but other than that it did it’s job but at the end of the day it made my brow hair crunchy so I’m not sure if I applied too much or it dries down like that. 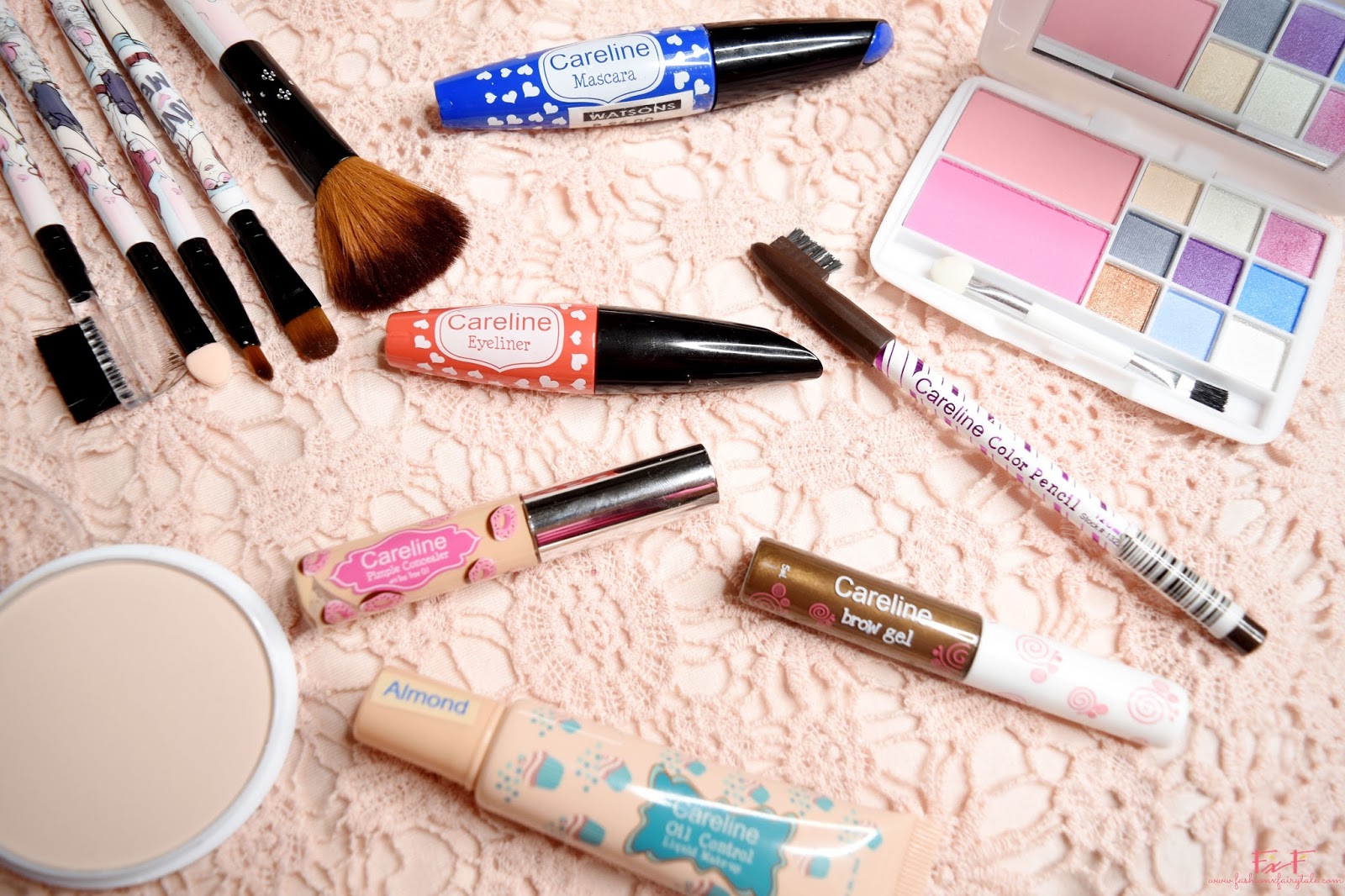 Then on to blush I used the makeup set again since it came with two blushes.I used the lighter one and it was okay in pigmentation and gave the rosy cheek effect which I liked. I didn’t use the darker one cause I thought it wouldn’t go good with the rest of my look but in swatches they both are pigmented and give a nice glow.

Last step is the lipstick and I went with the Careline Magic Lipstick in Avatar which was the only one they had when I was buying so I went with this one. It is like the pay lipsticks when I was little and it turns your lips to a color that matches or something like that. It is supposed to be strawberry scented and it does but it has that artificial chemically one which I am not a fan of but it doesn’t go on the lips. It came out to be quite rosy pink on me and quite pigmented when it settled and it has a glossy finish which is quite different since I’ve been on a matte finish fix at the moment. Last thing is the brush set and it is pretty much the same as th Ever Bilena ones and has the same kind of brushes but in a different print on them. As I said they work but I don’t quite need them but it has some good ones. 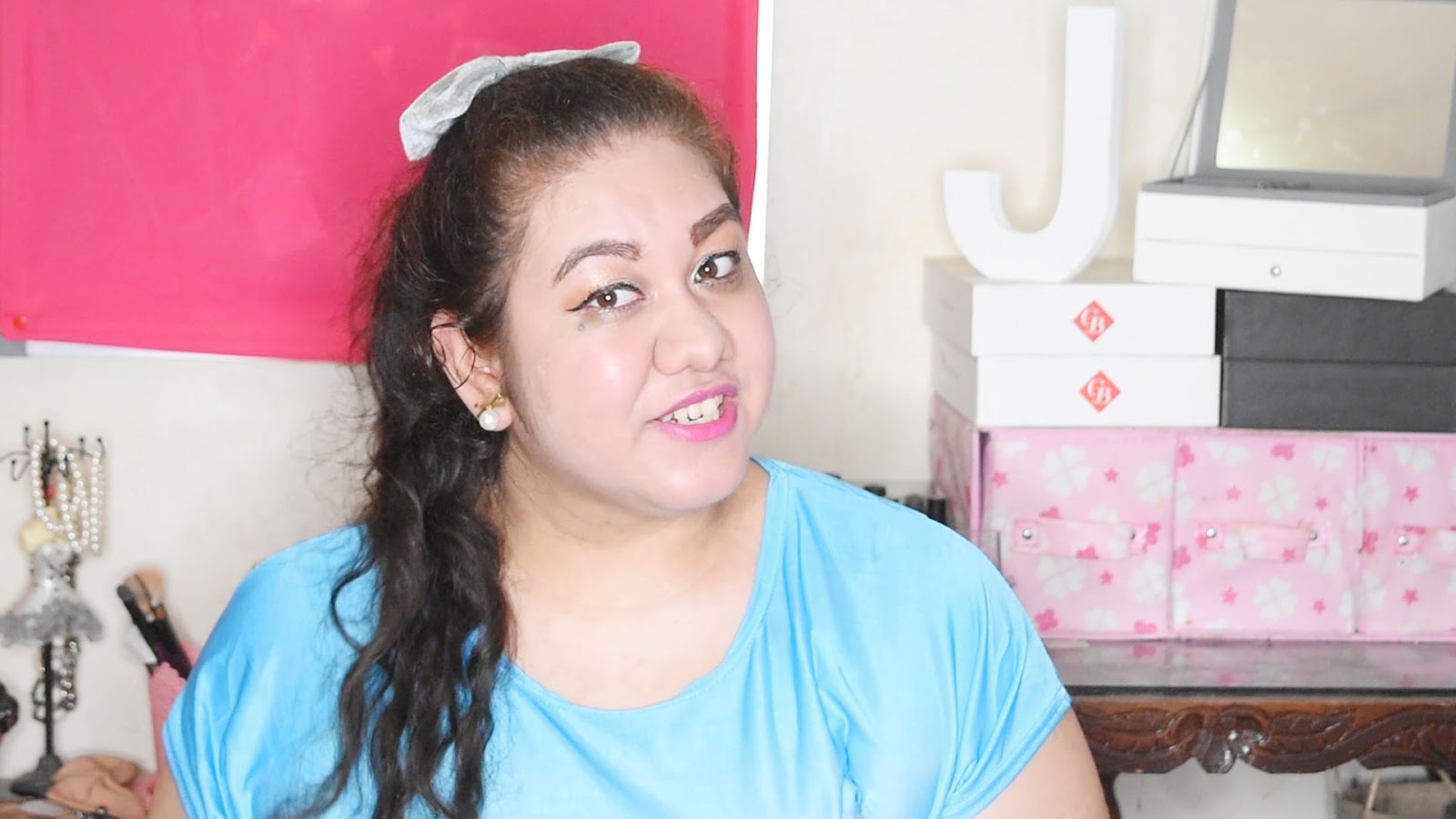 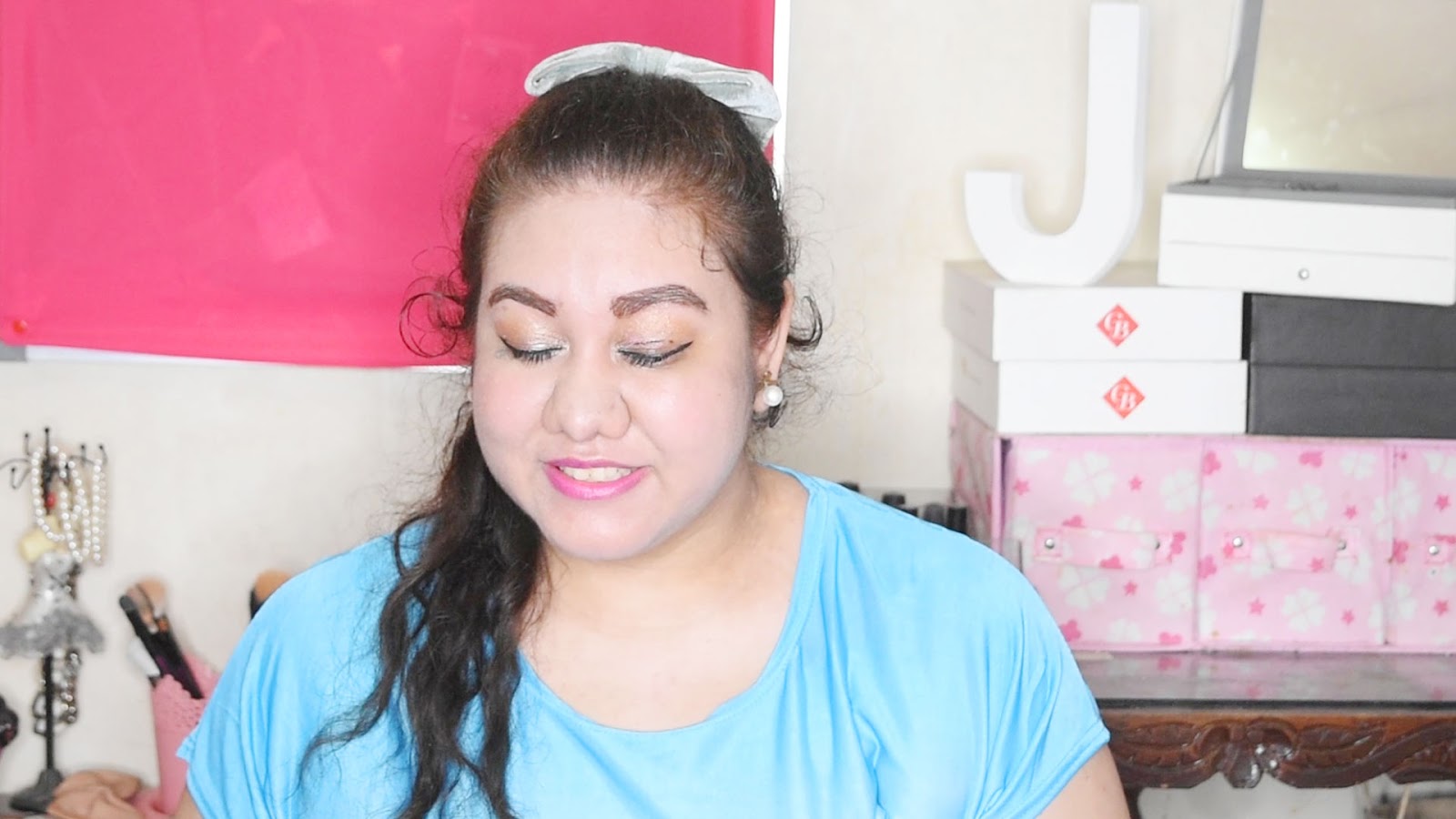 Now here is the most important part which is what it looks like on my face. Keep in mind the base was not my color so it did make me seem pale and like a vampire which I know what I am using for a Halloween look if I needed it. I wasn’t quite a fan of how the look turned out but I tried to go for a simple everyday look instead of the last more glam and made up kind of looks. The brows turned out quick and the lips didn’t seem my shade. I did like the eye look and blush though. I’m not saying they were bad but the way I did my makeup it wasn’t my cup of tea and I didn’t do my best job. Maybe if I get the right shade and try again I would probably do better.

I hope you enjoy this type of post and found it helpful with this brand. I loved doing this and I love trying new stuff and discovering local brands so if you have a brand request from here I’d love to know. So you watch the video of me trying he makeup and creating a full face. I gie my thoughts on it as well but this is just in depth and I feel like I can describe it better when it is written. That was it for my Friday blog post so hope you liked it and enjoyed them both and have a great weekend!

What was your favorite teenage brand makeup?