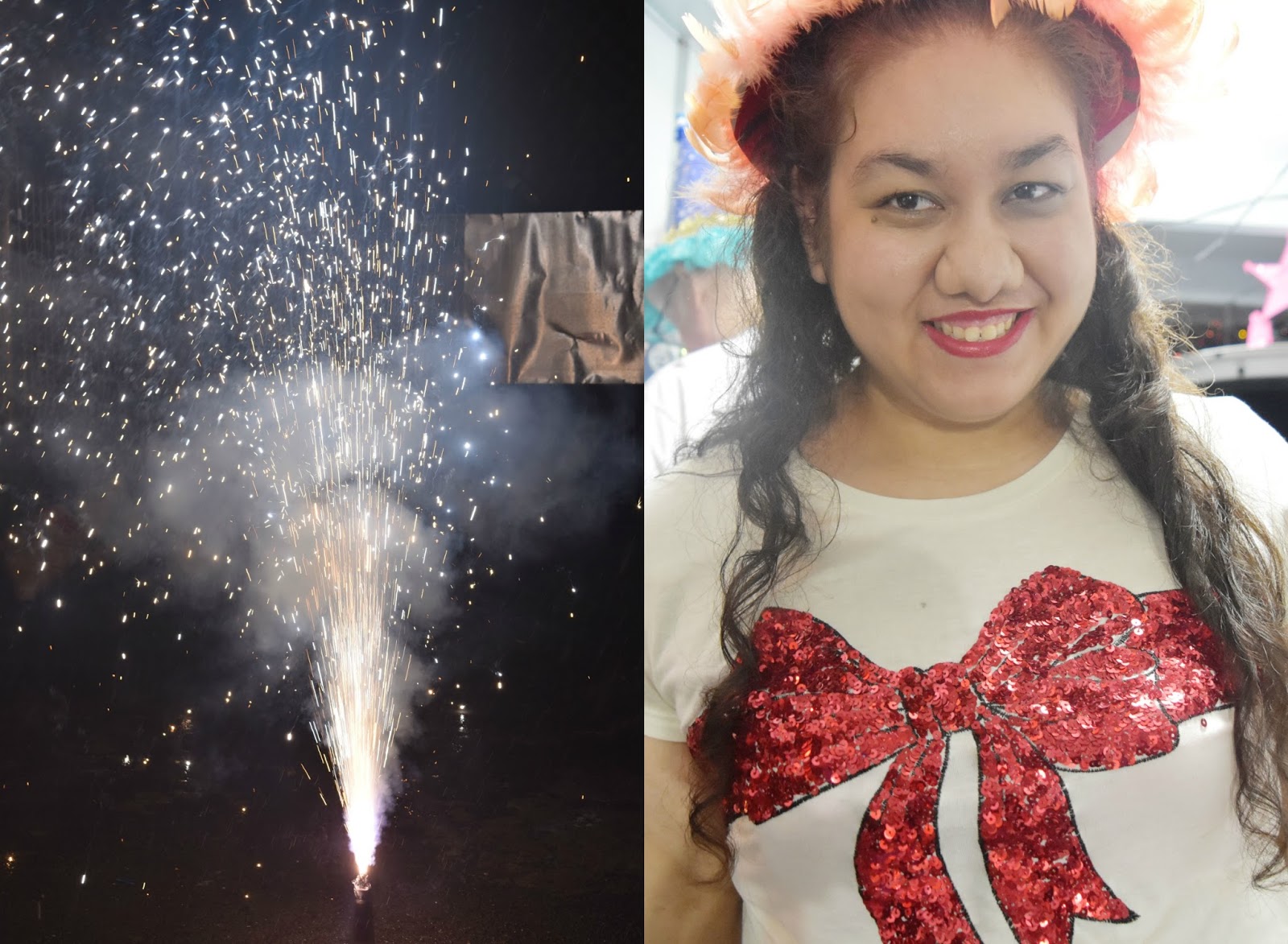 Happy Sunday! I guess it is time for my annual Sunday Summaries New Year Edition. I’ve done this three consecutive years in a row so it isn’t going to stop me from doing it this year especially since I upgraded my camera. If you have been reading for long and already know this I will keep it short. In my family they celebrate New Years big and it is a huge affair for my mom’s side of the family. There are traditions and a lot of preparing goes into each of our New Years celebrations. Like every year I share a few pictures out of the many I took of the night leading up to that particular year. So here is this year’s party! 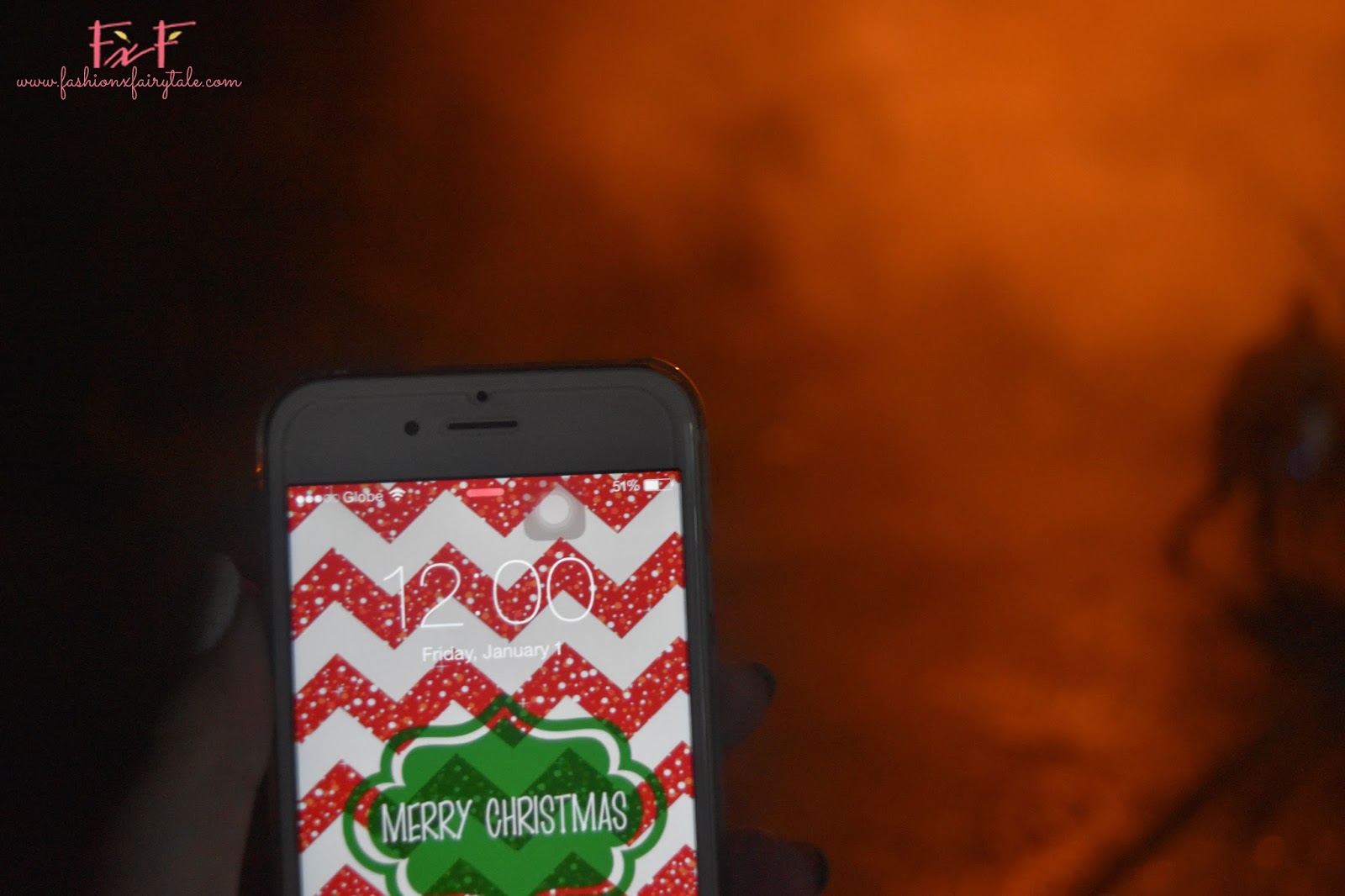 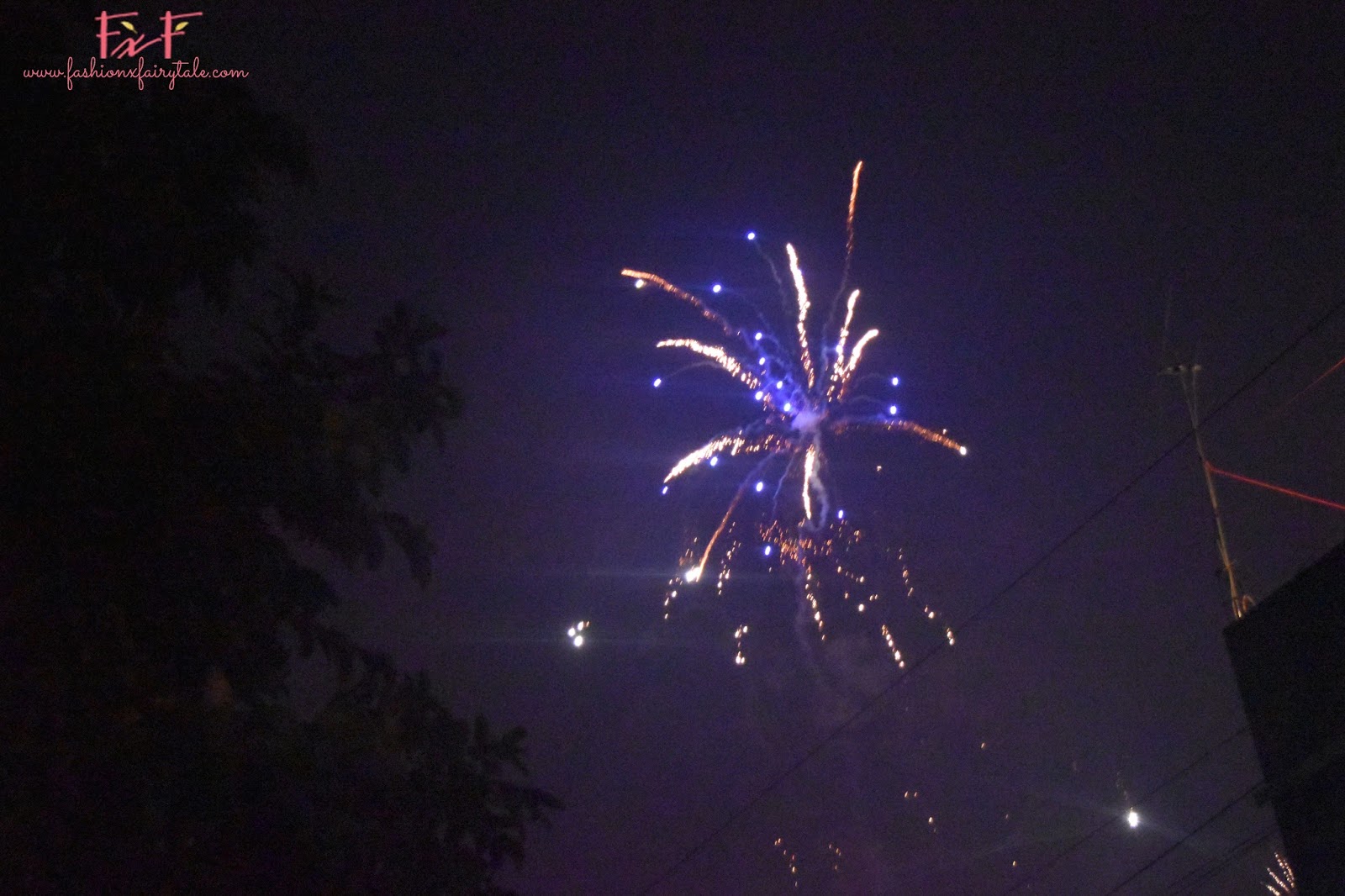 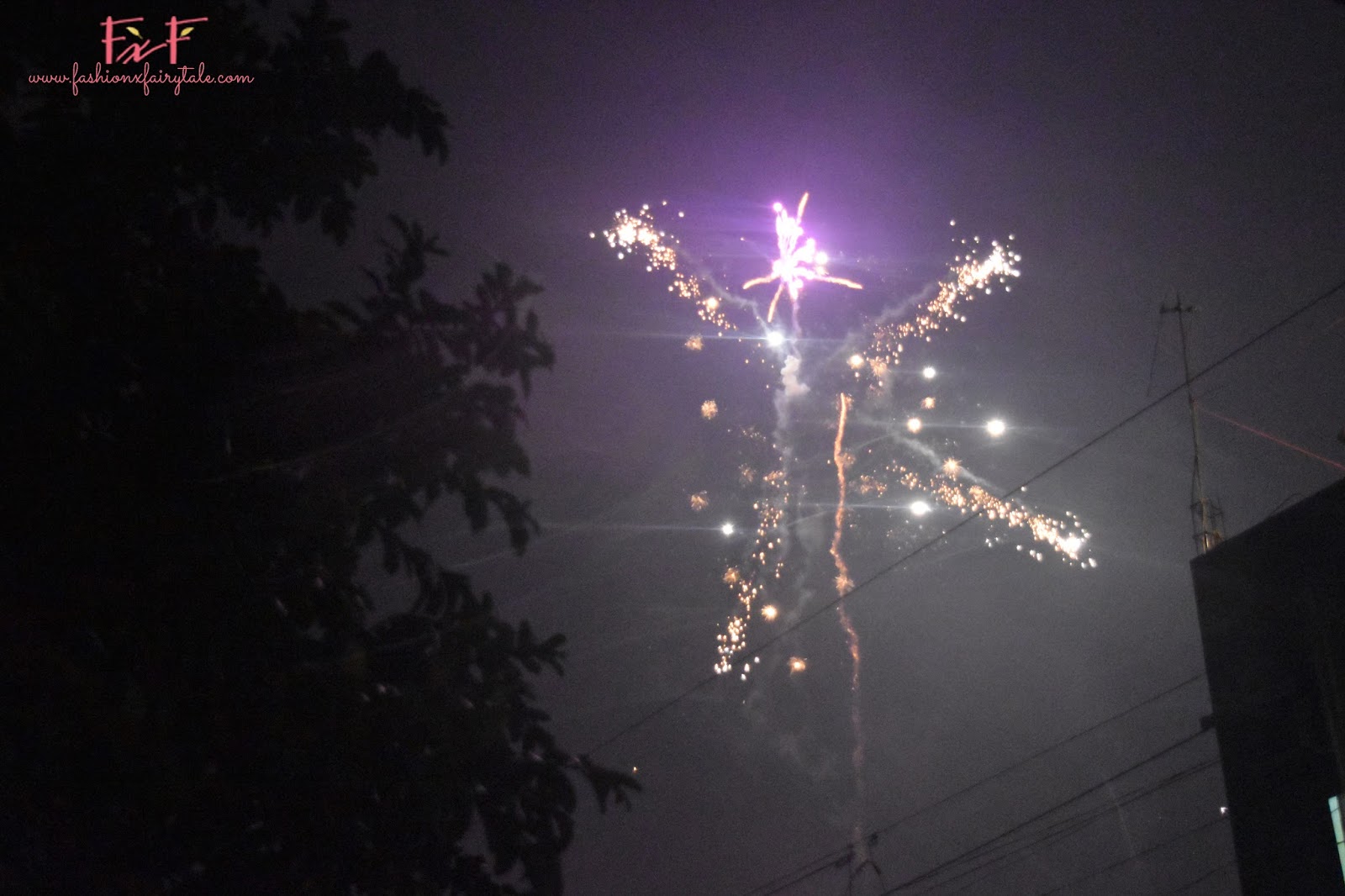 This NYE is no different than the last three I have written about. I don’t know if I should explain it again in this but a short summary is we wait until midnight and then we stand in the streets and fireworks go off and my cousin’s set of fireworks too. After about 30 minutes of celebrating outside we cook a big feast and eat all together. Now what is different to this NYE was it was storming and raining hard so there wasn’t as many fireworks and we didn’t stand outside quite long. We also didn’t cook but just ordered food this year. So when I look back on this I can read it was raining really hard pissing my cousins off who wanted to set off a lot of fireworks but could only do a few because the water would stop it from going off. I always seem to try and take good pictures of fireworks but it doesn’t really come out. They weren’t that good this year though since it was raining but I can just try and practice to get my perfect firework shot. I somehow caught my phone to say exactly midnight so I manged a picture right before it hit 12:01. Also just before the picture was taken the neighbors shot off a huge firework on the street and the smoke it caused blocked the whole street and I have a picture of it but I didn’t post it here but if you saw it you would say it was like a picture out of a horror movie or a post apocalypse scene cause it was so thick. You kind of get the idea from the picture above but that was before the wind blew it towards us. 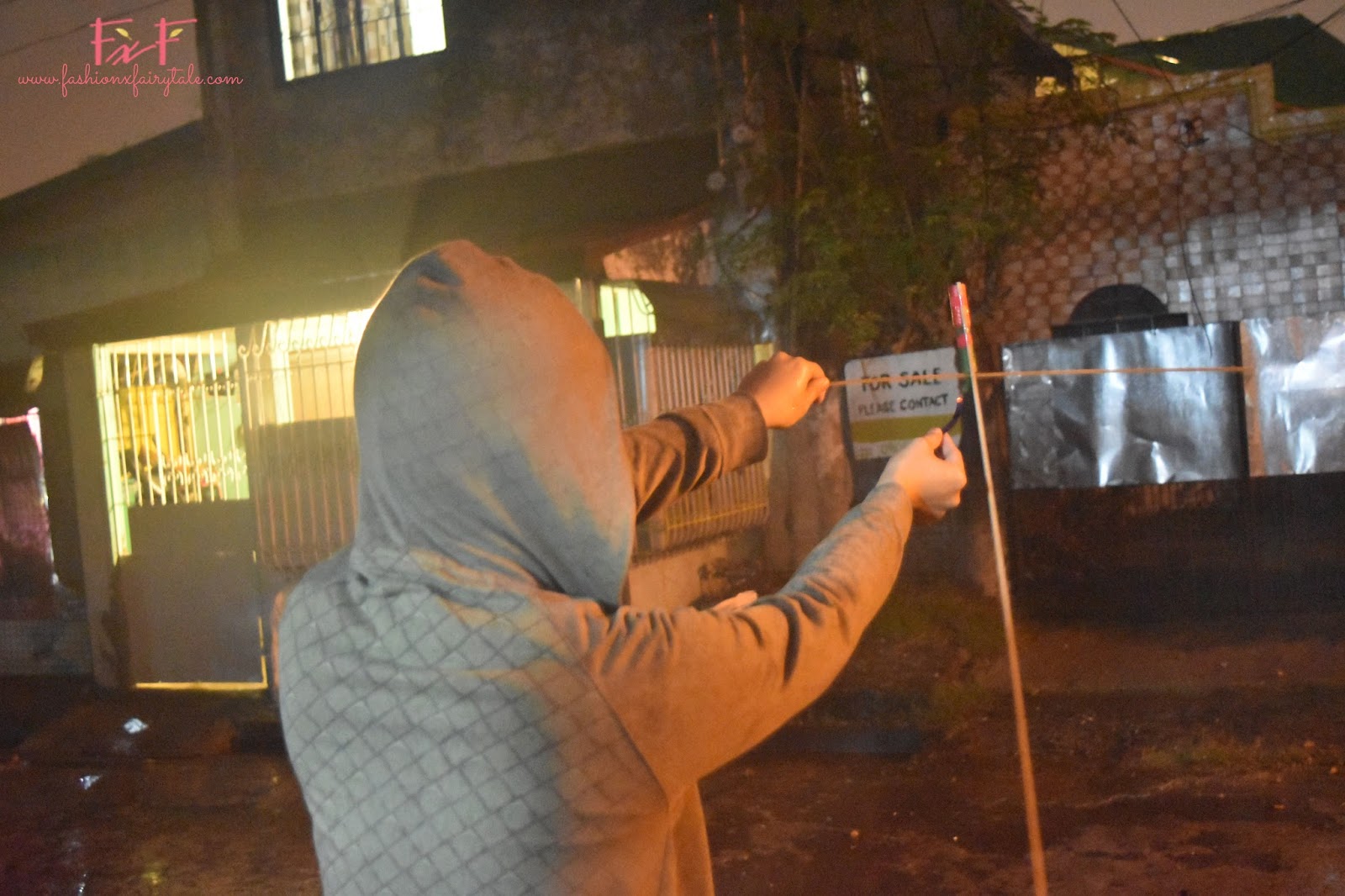 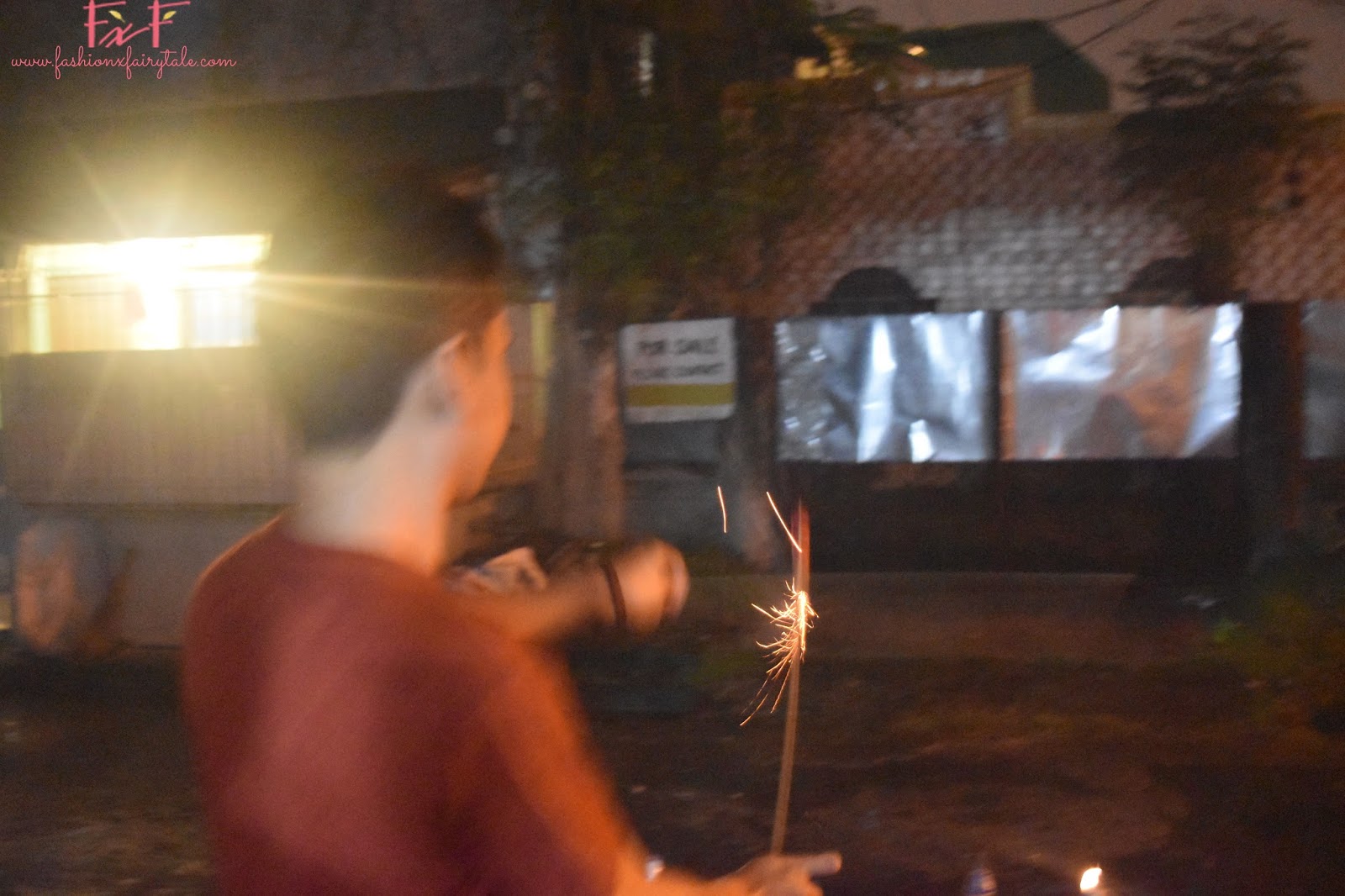 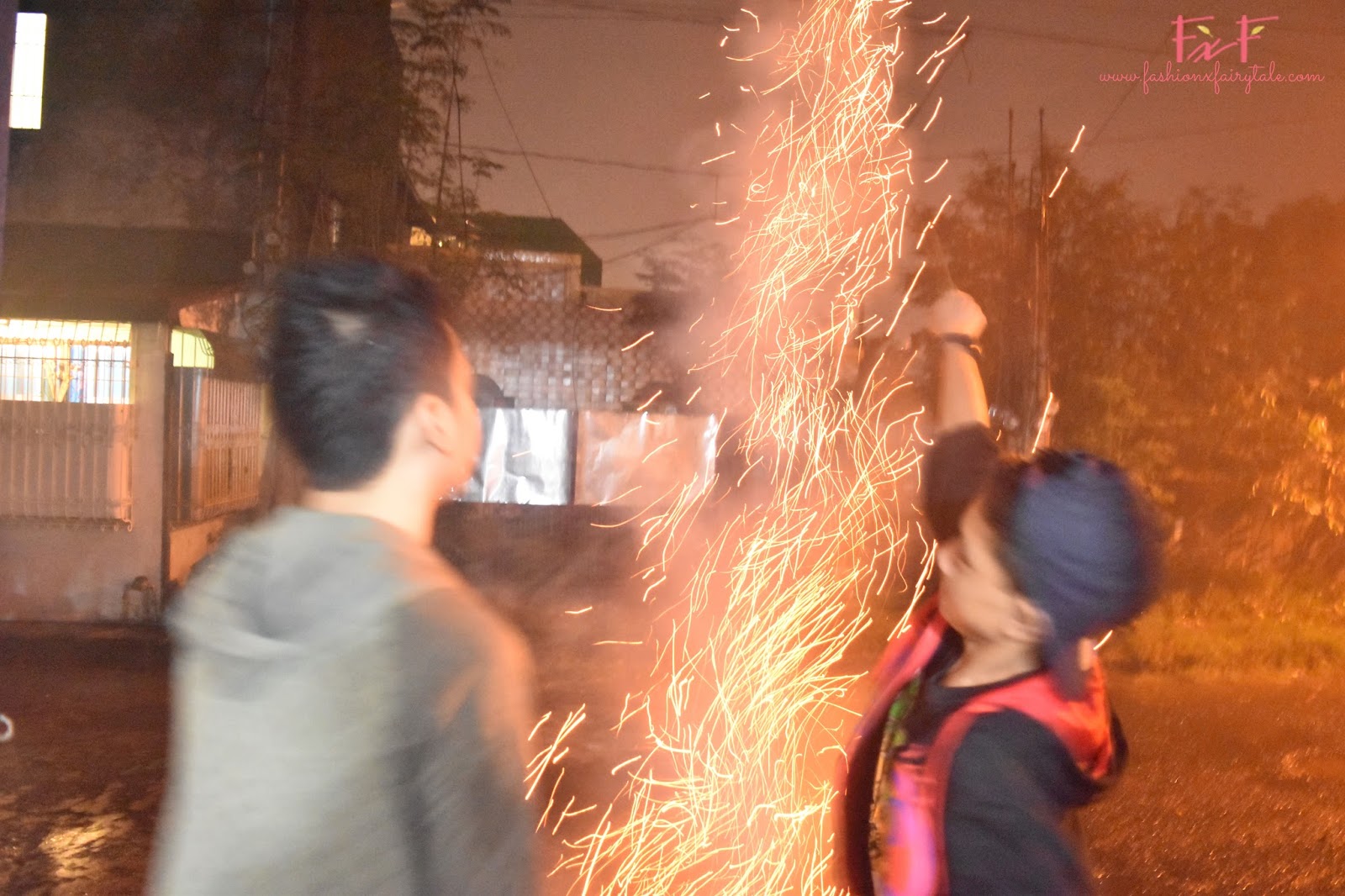 Here is my cousin as I tried to get a few shots of them setting them off. I couldn’t set my camera on manual as it is still broken so this was on automatic and the focus and shutter was set. I could have got some good pictures if only my camera wasn’t still broke from blowing up the flash. I think I say cousin a lot on my blog but that’s because I have a million. My mom has 5 brothers and 4 sisters and they all have kids so the number of cousins is really high in my family. My cousin Lynn I talk about is not really my cousin but is married to my cousin so I call her my cousin and that’s like that for my family. The two in the picture live in one of my parent’s apartments on our property and the one in the jacket is a couple years older than me and the one in the hat just turned 13. It is their first time I talk about them on here but this is the cousins I watch movies with on twitter if you ever wondered. After they set them off we did do some sparkles and I wish my camera could have taken me writing my name or got a picture of me with one but maybe next year. 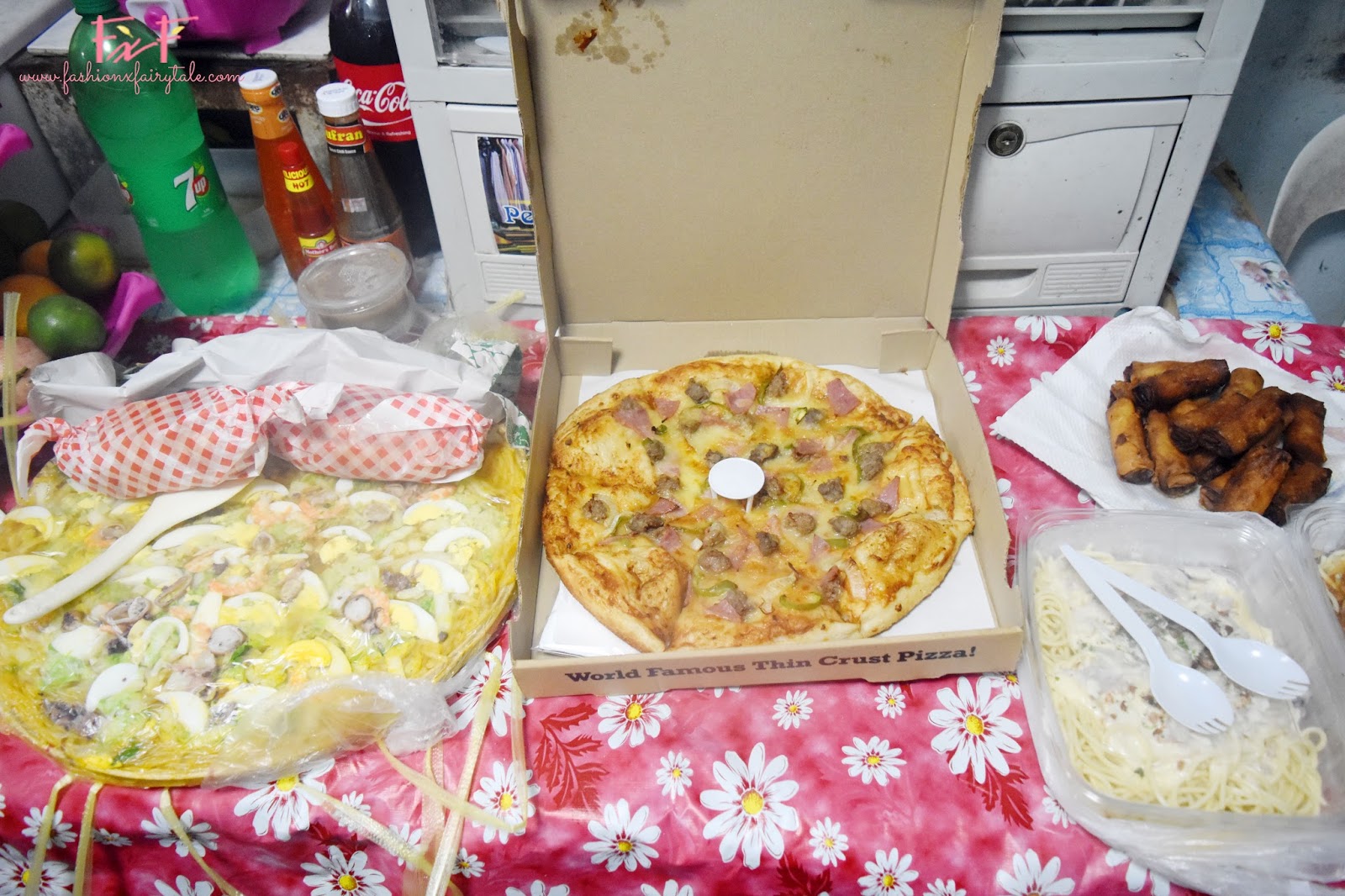 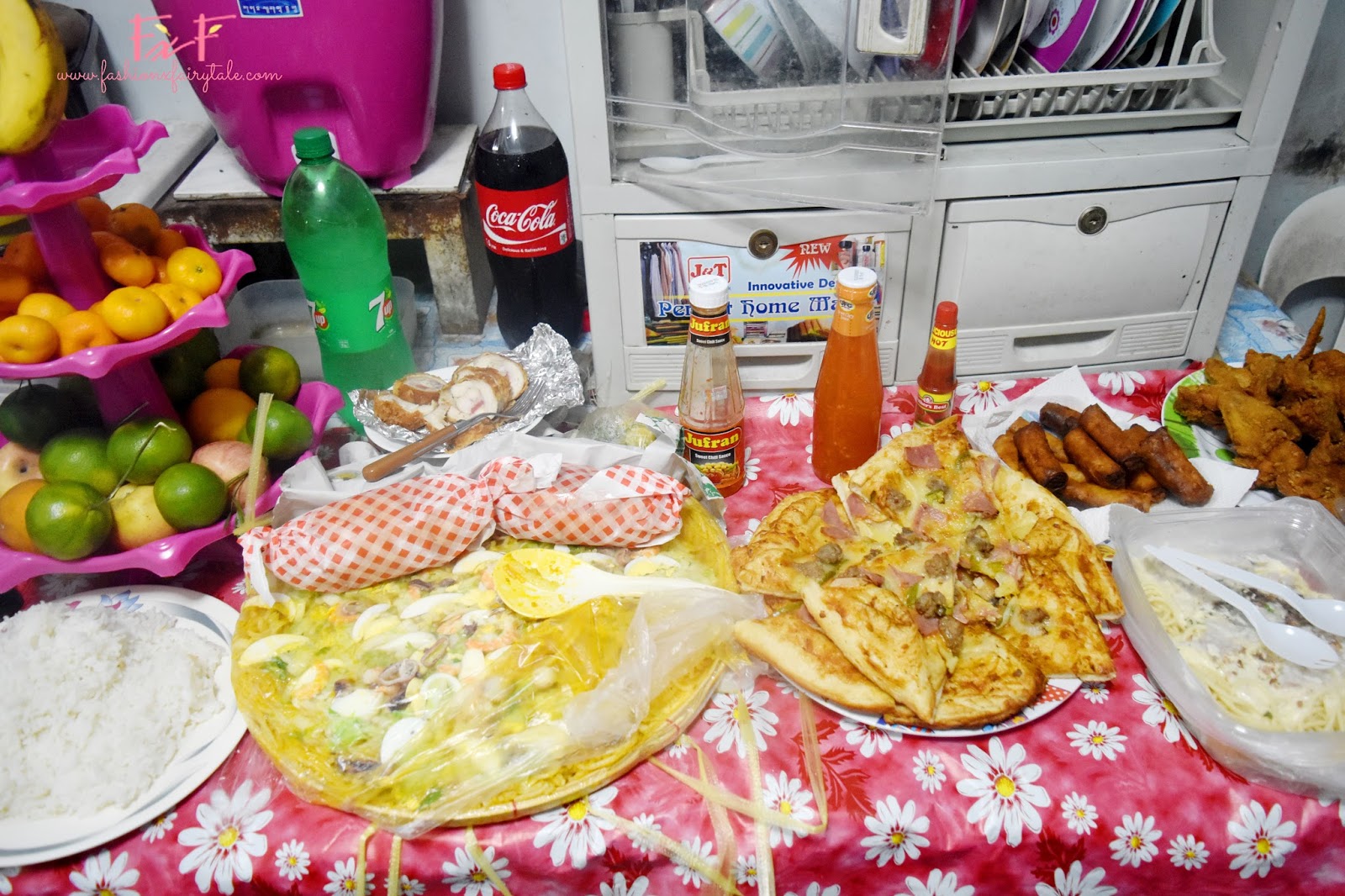 Here is the table of food for this year. It is quite different to the previous feasts we had because it was take out. I guess my family was lazy to cook this year and I don’t blame them because there were only a few of us this year not like before. It was still pretty good. The only bad thing was the food spoiled and we didn’t know it and three of my family including myself got food poisoned so not a fun way to ring in the New Year and sending my cousin who is 13 (the one pictures above) to the hospital for a few days. It didn’t get me hard but I guess my immune system blocked it a bit. The funny thing is it hit us a day later. I guess when we look back on it next year we might laugh and not get that take out again. 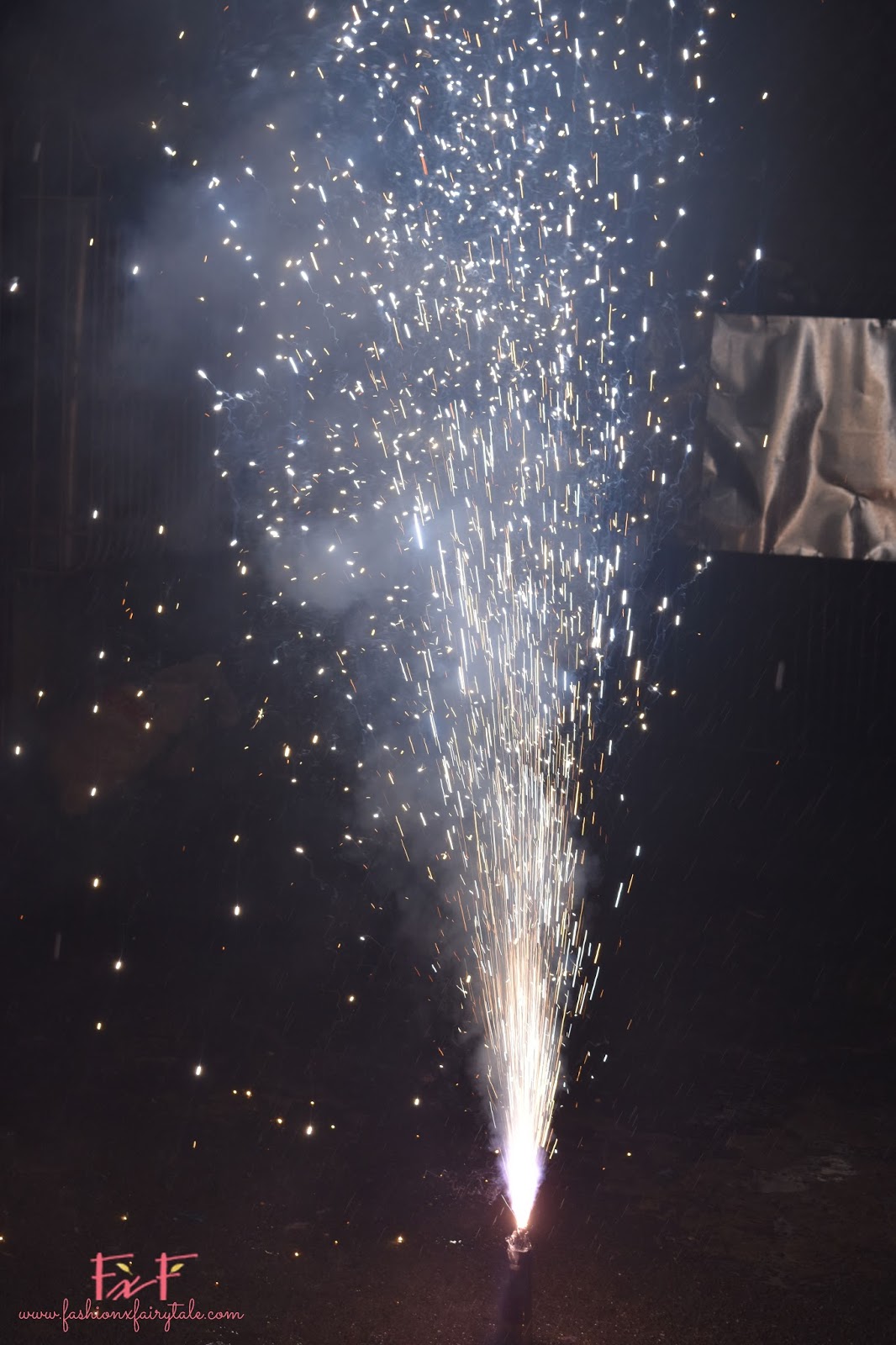 Every year I make a playlist of all the years top music so it either being number one or overly played on the radio I was smart enough at the beginning of 2015 to make a playlist and each time I knew a song was becoming big I would add it and it helped so much. It has become my thing and every year I now look forward to just jamming and dancing to the sound system at full volume with my cousins. My spotify is my blog name if you’d like to see the playlist but it had a lot of Justin Bieber, One Direction and all the other famous songs like Whip Nae/Nae on it. I think the song playing when it hit midnight was Sorry so you know I was singing loudly and dancing to it myself in the streets while it rained. I am a party animal.

Another tradition that came about is my family’s group picture. We started it in 2013 and it became a thing. The first year I had it on the fence in front of our house and kept running back and fourth to get the shot and be in the picture. The next year we had it in the garage and I placed my camera on top of the car and I again ran back and forth to it. This year however I had a tripod and a remote so it was easier and I didn’t have to keep running which I am thankful for. But every year we still don’t seem to take a decent picture. It is either blurry, not in frame or something goes wrong. Each and every year something happens and even this year as well. I guess it is quite funny and maybe that is the tradition to get a picture that isn’t perfect because we aren’t perfect. I kind of want to add the collage I made of all the pictures but I don’t think I will. I’m hoping next year or one of these years we will nail the perfect shot. 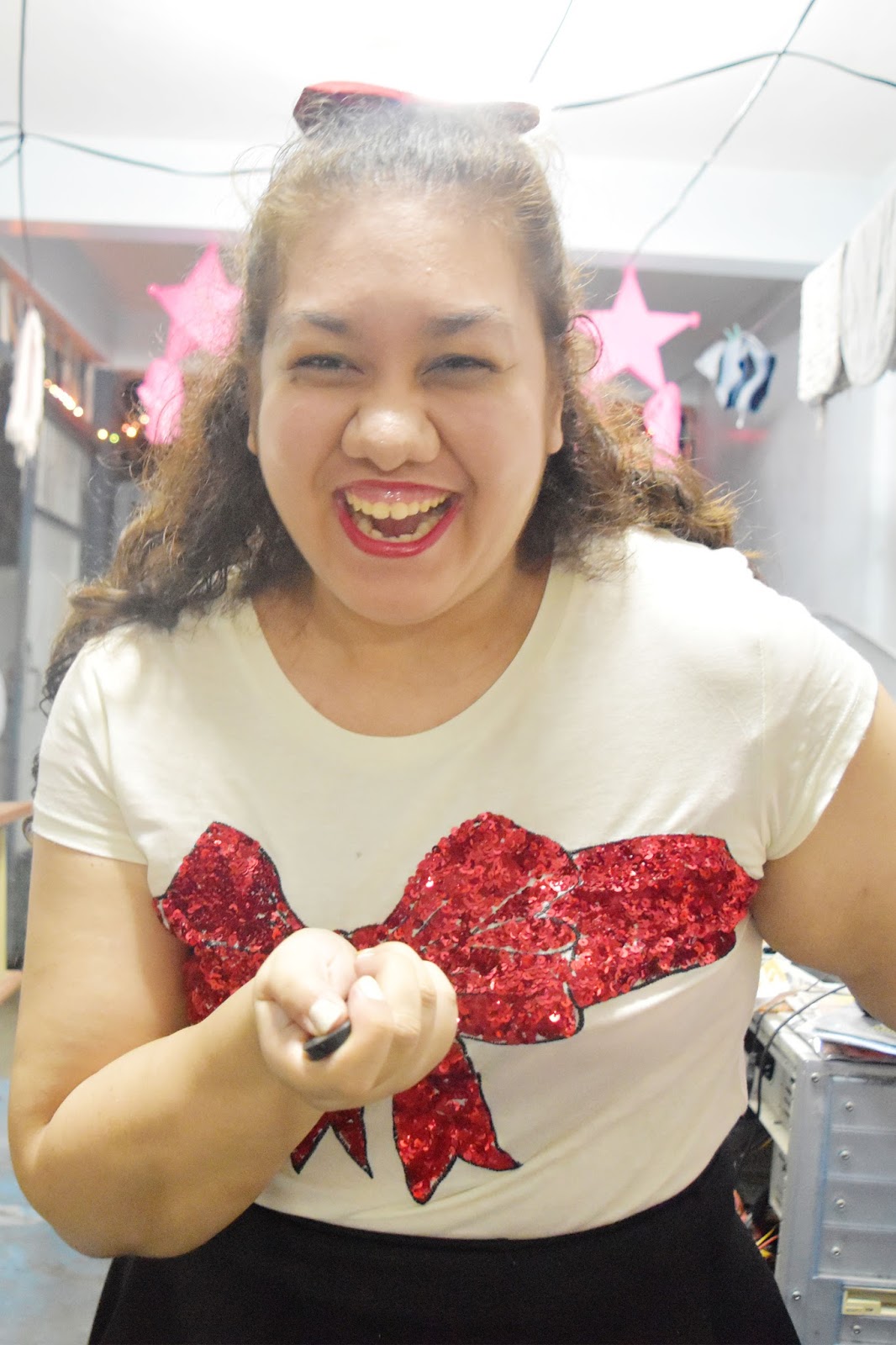 This is a small sneak peek into what I wore. I have a formal outfit and this was just for the house party like I do every year. I also have a tradition of ever since I moved here I buy a trumpet hat. You can see it from my previous years and also I am wearing it in the first picture plus you can see my dad has one on behind me. I keep them every year and have to have one or it feels like I won’t have a good year. I lik this picture since it was the first one I took in our garage before the party started and you can see how excited and haeppy I really am. I know my top was an H&M Chrsitmas collection but it had sequins and you know I love bows.

Well that was how I rung in 2016! I went back looking for the links for each one I did and this will be the fourth one. It is so weird reading those back and feel like I do the same thing every year. It has become somewhat of a tradition for us and I love every year I show a piece of it off. I don’t know what next years celebration holds but we just may have to find out. I hope you enjoyed seeing and reading what I did on NYE and let me know if you did anything special.

What is a tradition if you have any for NYE?