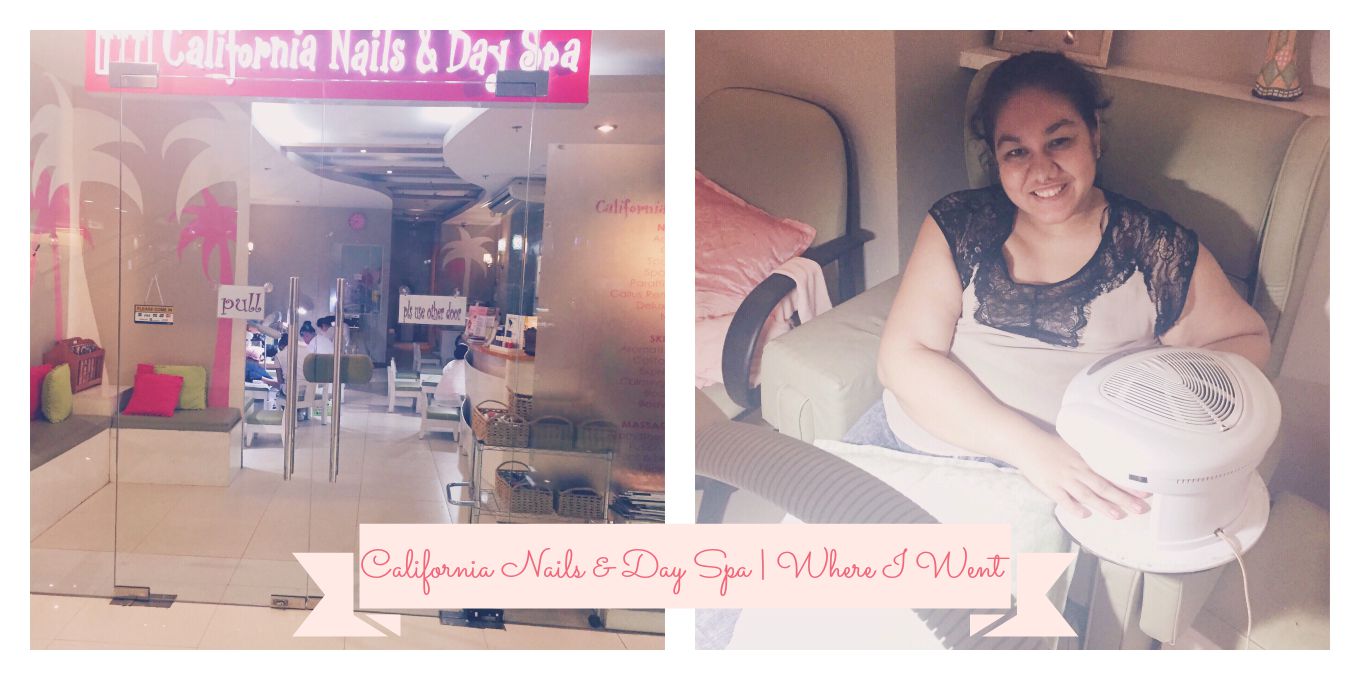 Happy Monday! It has been a while since I have put a Manicure Monday post up. I used to do them wuite a lot but I usually paint my nails the same color over and over so not much worth mentioning. Last week I went to the nail salon for a pedicure because I really needed one and dancing on your toes with them poking into your skin is not fun so I went out and decided to get one. I usually just let my aunt do it who is a manicurist anyways but I wanted a little pamper and I had some money leftover that it was time to treat myself. I wasn’t originally going to do a review and where I went on the place but I had quite enough pictures in the end I realized why not. Silly me did them in square photos on my iPhone since it was intended for Instagram but it is sort of like a roundup as well. So I hope you enjoyed this little review of the salon I went. 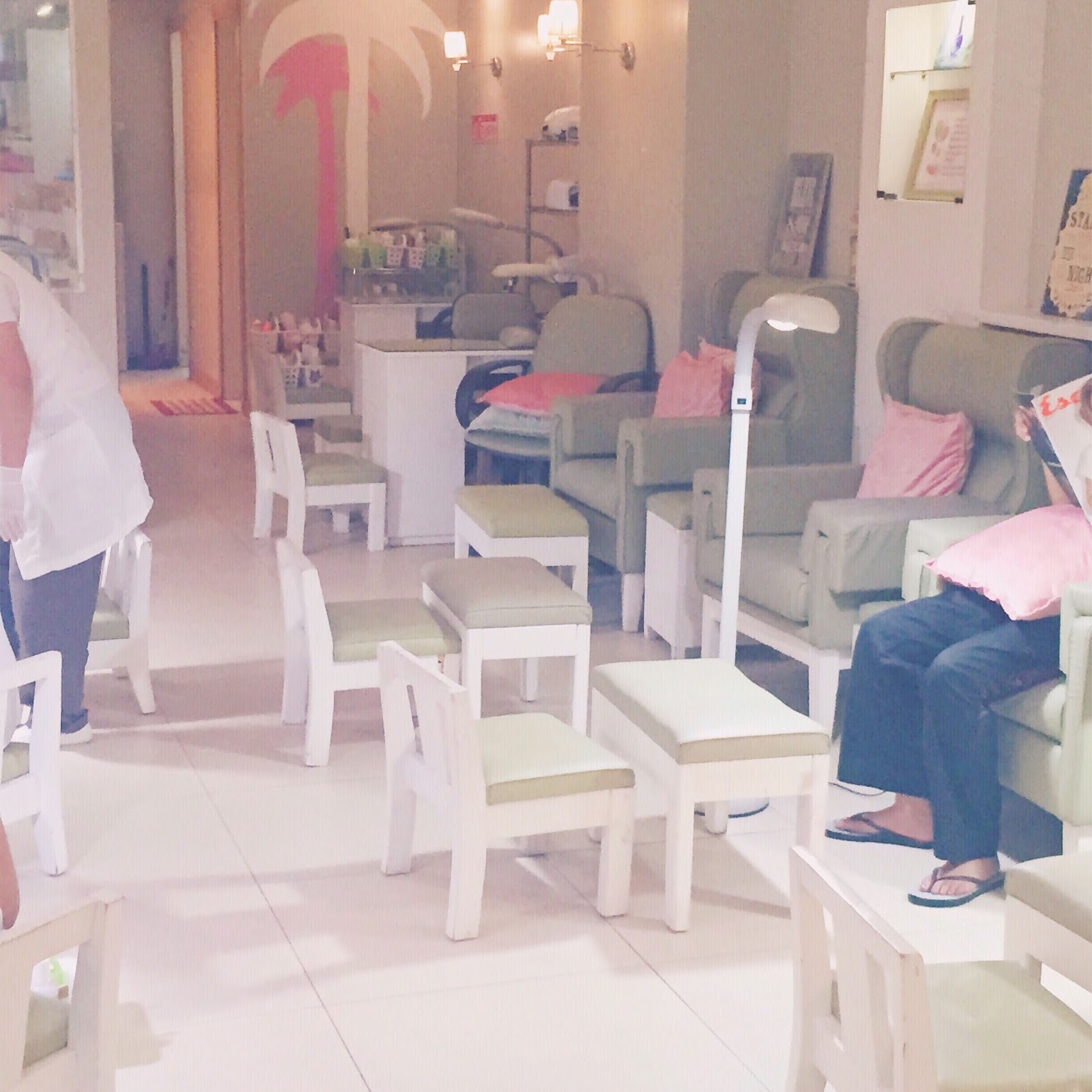 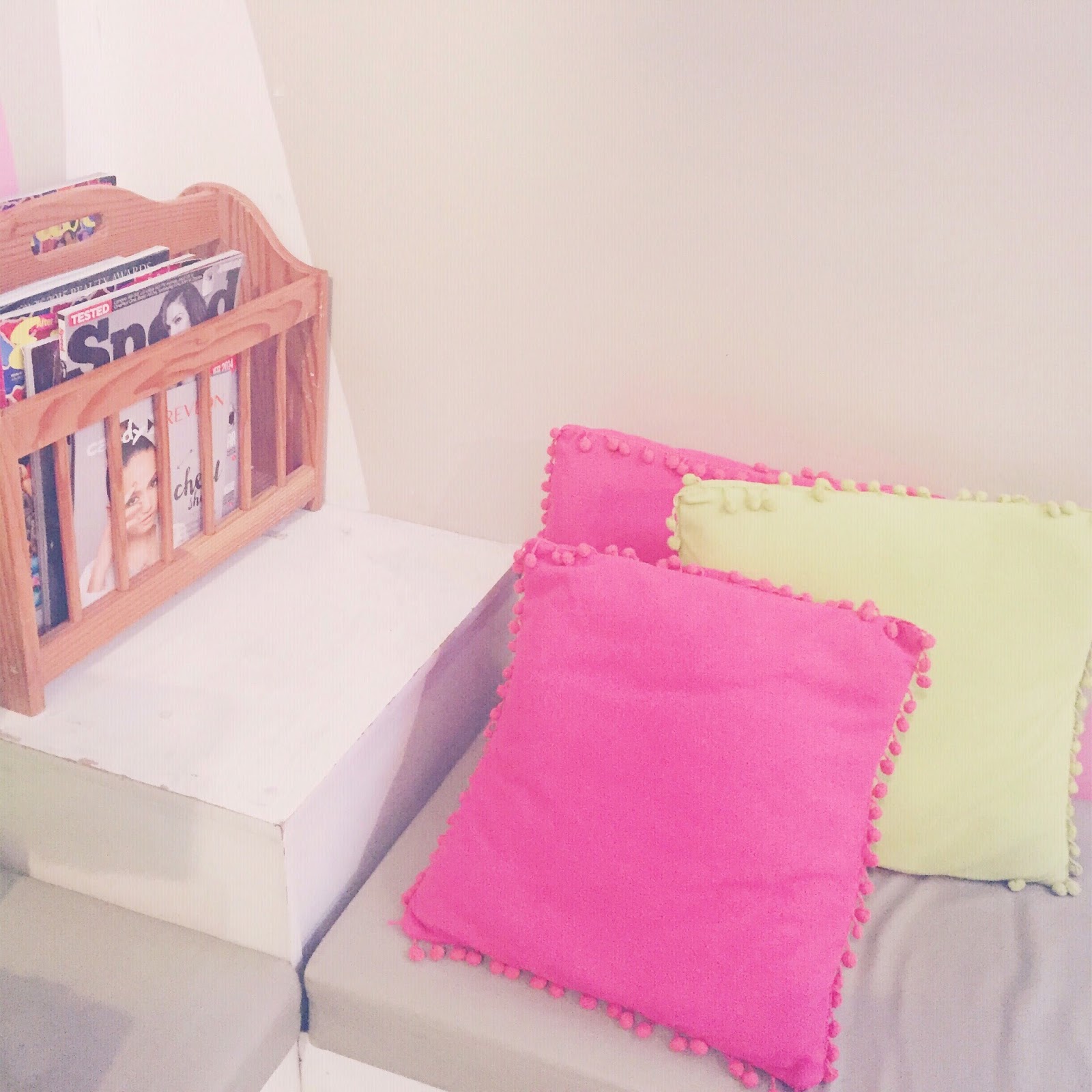 Here is a small view of the place.I love the decor and when salons are themed and have pretty interior because of course that’s what makes you come in as well. I love the color scheme and of course I have to compliment it because it is my favorite colors. It had some cute little decorations and some comfy pillows to rest your back on and for your lap. I technically used my pink pillow as a background to the photos I was taking. It was dark inside with not too many lights to create a relaxing environment and some acoustic music that really set the mood. They had separate portable lamps to help them see and the biggest comfy chairs while you get your nails done. I really liked it all and felt very nice and relaxing being there. The package I went with was the spa Manicure and Pedicure and that was 630php. I think that is quite reasonable and around $13 for a mani/pedi. I was going to only get a pedicure but I thought since I was there just go for it. The package includes a foot spa and hand spa so it was quite relaxing and I finally got that pamper time I’ve been wanting.

For my manicure, I got just a basic one with polish. I was going to go for maybe acrylics or gel nails but didn’t really have time to so just basic polish was good enough. I had fairly long nails going in and she was kind enough to ask what I wanted to keep them long or short and I said just a rim so they can be about even and still be a little long. The technician did her thing with one hand while I scrolled on Instagram using the other. She did accidentally cut my cuticle which is not a big deal because I’ve been to so many places that do the same exact thing to my left hand pinkie finger. The seem to think it is thick but hen they clip down ir is very thin. It hurt really bad and she immediately apologized after I did a whimper and started cleaning it up. You would think after having it done to me so many times I would learn and tell the people but I end up forgetting.. Let’s hope this time I remember. She end up finishing it but for the next two days it hurt really bad when I bumped it against something but now it is pretty much healed. It wasn’t her fault and I am not holding it against her. She treated it right away and I wanted to include this because she handled it well and kept saying sorry. That was the only bad thing other than that she painted them and set me under a dryer.

As for the review of my pedicure while I was having my nails done I was also getting my toes done at the same time. So I really felt like a queen being pamper as it was my first time having them both at once. I was really scared to get them done as I can’t hurt them because I dance on my toes so much that if I get hurt it will be a long time to heal especially from past experiences. Being a dancer really hurts your feet and I’ve hurt my toes so much before that it takes longer to heal. I was really worried about nothing because she was gentle and did everything perfectly and it didn’t hurt. I also don’t know why but I am not ticklish on my feet anymore like I used to. I got them sucked in a foot spa, got my pedicure, than she scrubbed all the dead skin, moisturized them and I got a massage. I didn’t really know what was included at first but it was really nice and felt so nice especially being on my feet all the time. It was really good and I came prepared with my own flip flops for afterwards. I had my nice fresh pedicure complete with hot pink toes. The lady who did my nails name was Magnolia and I thought I would mention her and will be going back to her again. 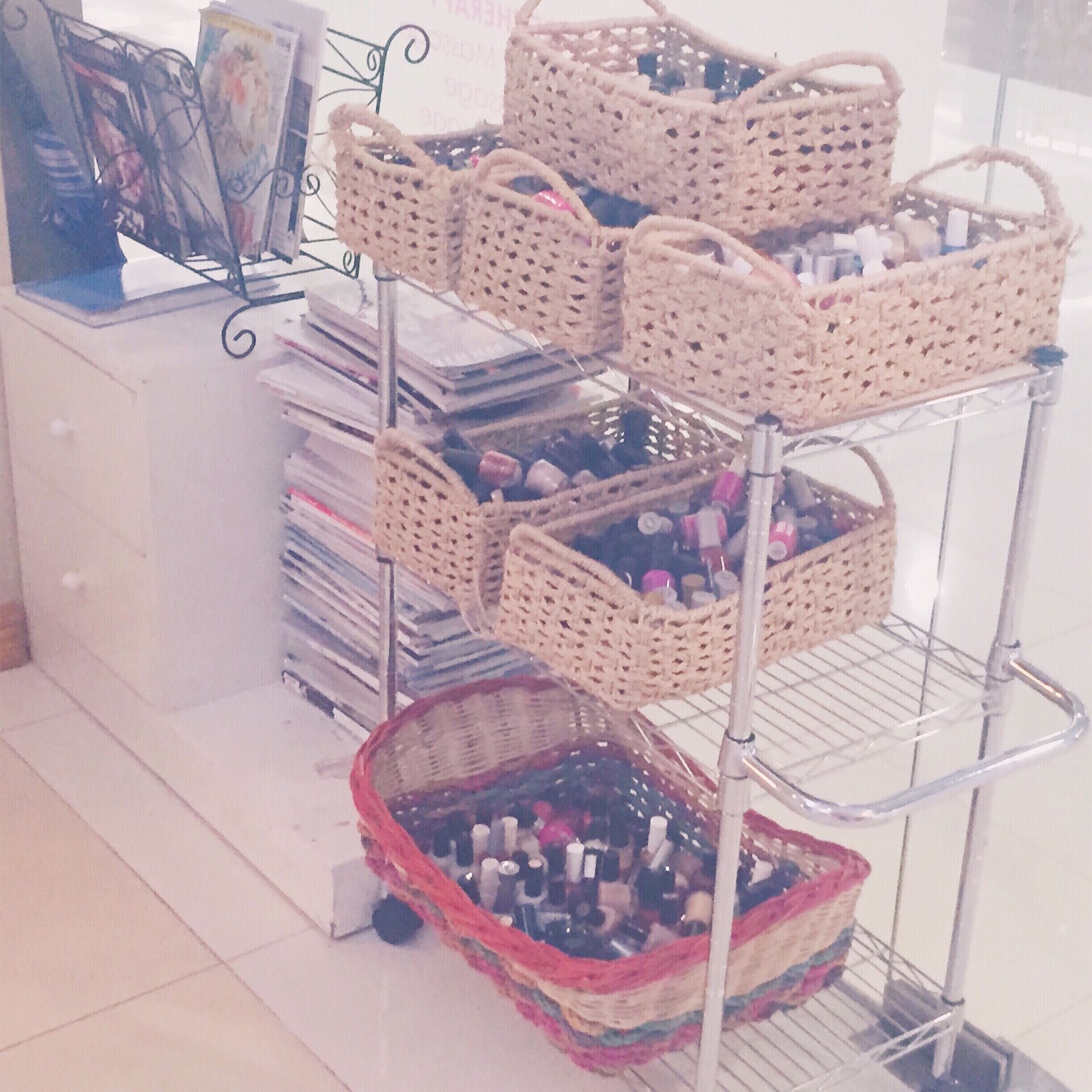 They have quite a selection of polishes to choose from. Here is the rack and yes I did go through the whole thing to find the exact color I wanted. I am so indecisive so it took me a while while they were trying to do my hands and feet. It actually costs 30php extra to get a high end polish and the ones on the bottom are free with the manicure. they have so many like OPI and I was going to get that as I haven’t tried it and it lasts long but they didn’t have an colors that I wanted so maybe next time. Then they had Essie, Orly, Revlon and other brands to choose from and even this color light color changing polish which sounds so cool for the summer. 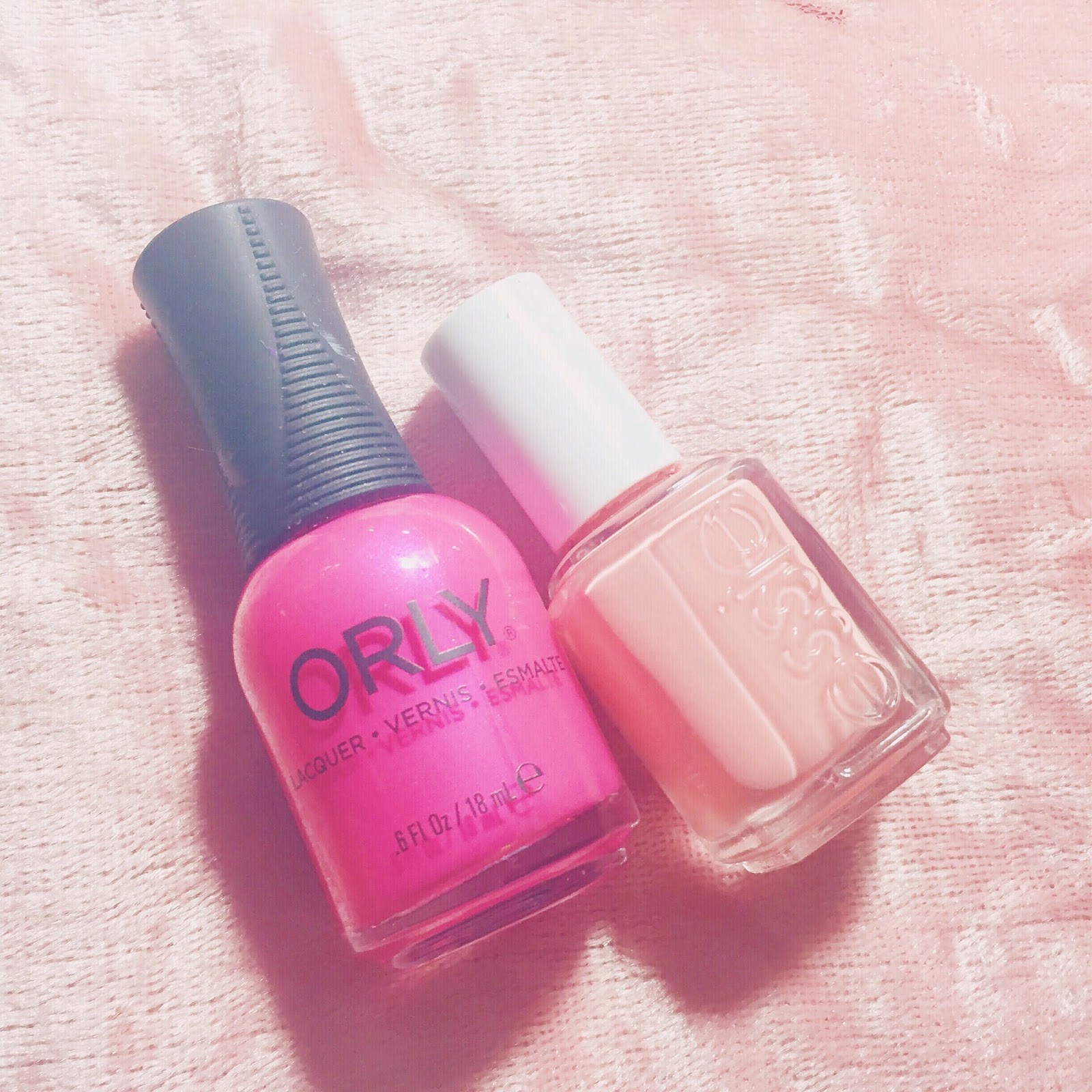 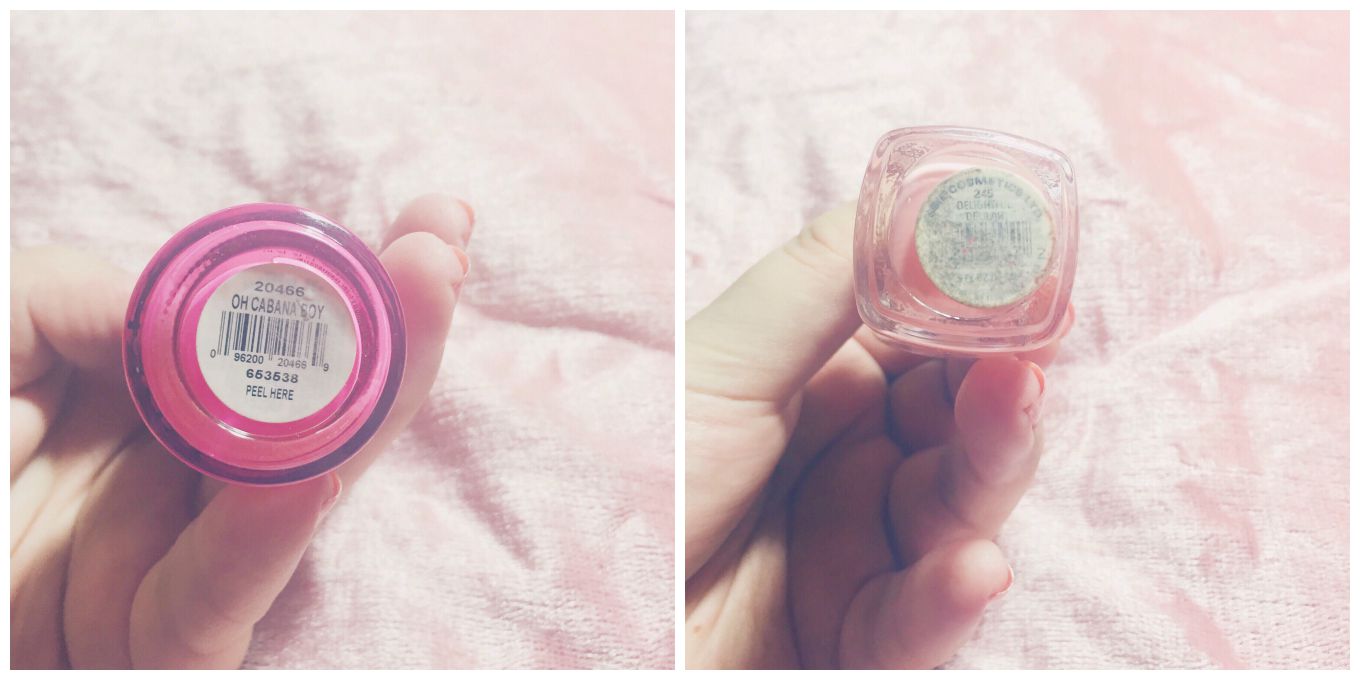 The colors I ended up choosing were an Essie color on my hands called Delightful Delilah. It is a color I was looking for because I just had bought a sweater in the same color just before getting my nails done and I knew it was going to be for an event coming up so I got it for that as well. It is my first time trying an Essie polish and I was really impressed. I did search for the shade I got online and I think it maybe be limited edition or something because I can’t seem to find it anymore but if it isn’t can you let me know as I really would like to buy the shade for myself. I don’t know if it is a part of a set but I’d like to find something similar or if there is a dupe that will make it even better.

For my toes I got an Orly polish and I wasn’t going to at first since I picked a hot pink Essie shade but it was too light and not what I wanted so the person doing my pedicure warned me and we ended up picking this shade as it is the closets to what I had originally chosen. This shade is Oh Cabana Boy and I really like how neon it is and that what I love going for on my toes no matter what time of year it is. They are so bright just how I like them and I’ve been into the mismatch lately of not having my nails and toes match but she says it is quite rare for others to pick two polishes as they like to have the same. I love matching and have to have a lot of my things match and my clothes and pretty much my whole life but for some reason I’ve been liking not having them the same and it is quite refreshing to see your hands not be the same shade as your toes. I’d love to know if your the same way or get them the same color. And the final result. It turned out so pretty and I am in love with the color. It is a salmon pink color with slight coral and peach undertones to it and just the right amount of pink as well. It seemed to apply well and was streaky the first few coats but even out. I love the texture and the finsh to it and really love them. They may have been cut a little short to my liking but that’s okay they grow out so I don’t have a big problem with that and maybe it will prevent them from chipping faster and breaking off. I a now an Essie convert and will be tracking down this color and maybe a few others because I see how a lot of other bloggers love Essie. I hope they sold them here and it was easier to get a hold of them but I am surely going to try. To review the manicure it has been a few days now and still no chipping but it’s only four days in but for me that is pretty good. I do have a small dent in on of them but other than that I see no other damage so far. I really can’t believe these are my real nails and they look good. I’m really happy and maybe get gel nails next time or try something else.

My overall experience at the nail salon was amazing and I will surely go back and ask for the same lady I got again. The staff was friendly and they were all so nice.  Everything was clean and sanitized and they had drying machines for almost everyone and I didn’t have to wait for one to be done. They had so many colors that it was so hard for me to choose and some great nail polish brands to choose from as well. I’m thinking to go back there especially when I need my toes done. Thank you for the nice time and I’ll definitely be back again.

Hope you liked this mini salon review and as I said it was going to be intended to be a blog post until the end. I really liked my time spent and my nails turned out so nice and it is really great I don’t have to worry about my nails for a while. Let me know what your favorite thing to get done and what color you always go for and if you couldn’t tell I usually go for some type of pink. If your in the Philippines than I know they have quite a few branches around and I went to the SM Southmall branch if you’re curious. I’ll leave some of their links down below if you want to find them or learn more. They offer other services as well and may try some of those out too.

Disclaimer: I was not paid to post or review this place. I went there on my on after hearing great things about this nail salon. Also I really needed a pedicure because dancing tap and ballet with your toe nails hurting is not fun, trust me. I paid for my visit and wanted to share my experience in case any of you went.

What is your favorite nail color to go for without fail when going to the nail salon?