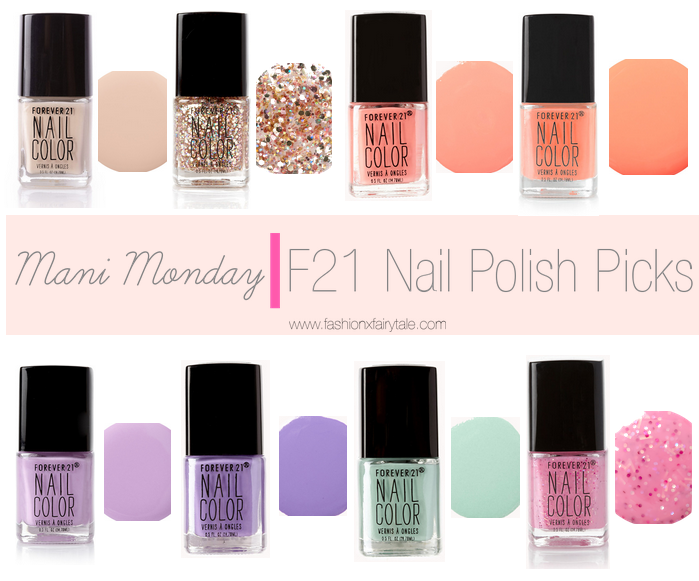 Do you ever get sucked in to those displays by the register at a store before paying?

Well I do and I have been obsessed with the polishes by Forever 21. They are cheap but very good quality and they have so many selections that I go crazy and buy 3-4 at one time which I don’t intend to but you just get hooked. I’m there about to pay and I see a color I like so I browse until it is too late and I’m sucked into buying one because I say to myself, “I don’t have this color yet.” or “I think this will match with my one top I just bought.” I know excuses, excuses but who can help it right?

Today I am sharing with you some nail polishes I am dying to get my hands on and will be looking out for when I pop into Forever 21 again.

First is Cream which I need because I don’t have a basic nude anymore.The next one is Goddess Glitter and this is a pretty golden polish that is glittery which I have been looking for. After that is Peachy Keen and can you believe I have never owned a peach color so I think it is about time I pick one up. The one after that which looks similar to the one before is Island Mango and again I don’t have one in my collection nor have I ever seen a color like this and plus it reminds me of summer and I still want it to be summer so that’s my justification in needing that color.

In the second row I choose Lavender Dream because of how light and pretty it was and I don’t have color as dark as this lavender shade. The second one is another purple which is Sugar Plum and I think it is so pretty for now and up until the Fall season which is good so I could wear year round and also the name reminds me of ballet so that is another reason. Next is Sea Foam and I have seen this on the site before but I can never find it in person and I am determined to get it in store one of these days because it is such  a pretty blue and I like that it is more green because the polishes I have are more on the blue side so I figured this would be a nice mix. Lastly, Pink Cupcake and this has to be my favorite and I am definitely picking this one up next when I go because it is the perfect pink plus it has sparkles and glitters in it and makes it the most prettiest and feminine shade. I have nothing like it and was memorized as soon as I saw it on the site plus isn’t the name cute as well.

Well those are the colors and I probably have more to add later on. I hope you were as memorized by the colors as I was and if you have tried their polishes s well then I would love to know what you thought about them.

What gets you sucked in before paying for your purchases?