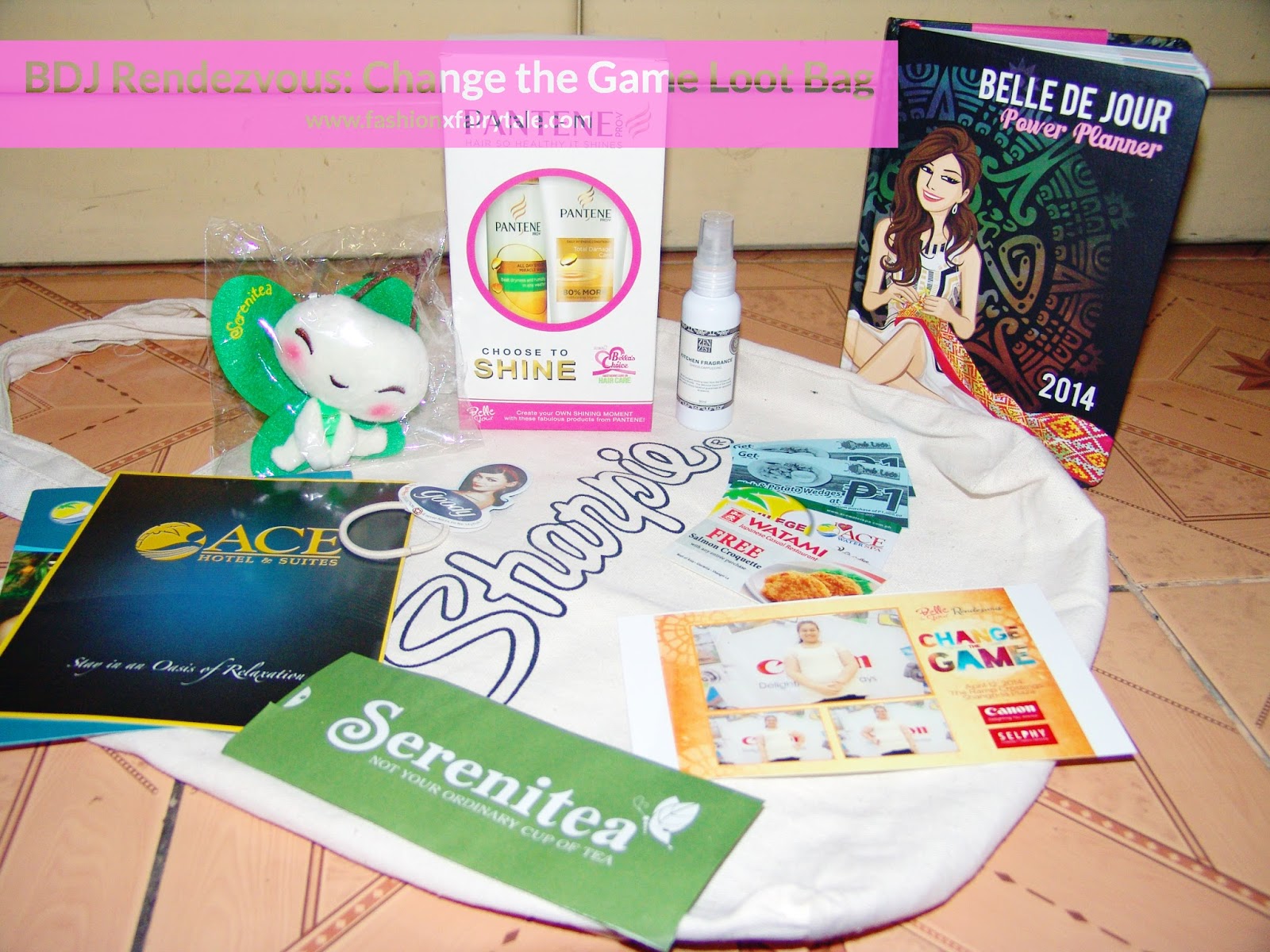 As promised the second installment to last Monday’s post about the actual event which you can read here. I like to separate these posts as I would love to be curious of seeing what people got at events. This is just a small post to show what I got and everything was pretty good. I wasn’t expecting a loot bag this time as it was a smaller event but it was a nice treat. So thank you BDJ Girls for this generous surprise and you always know what to include for us ‘Bella’s.’ 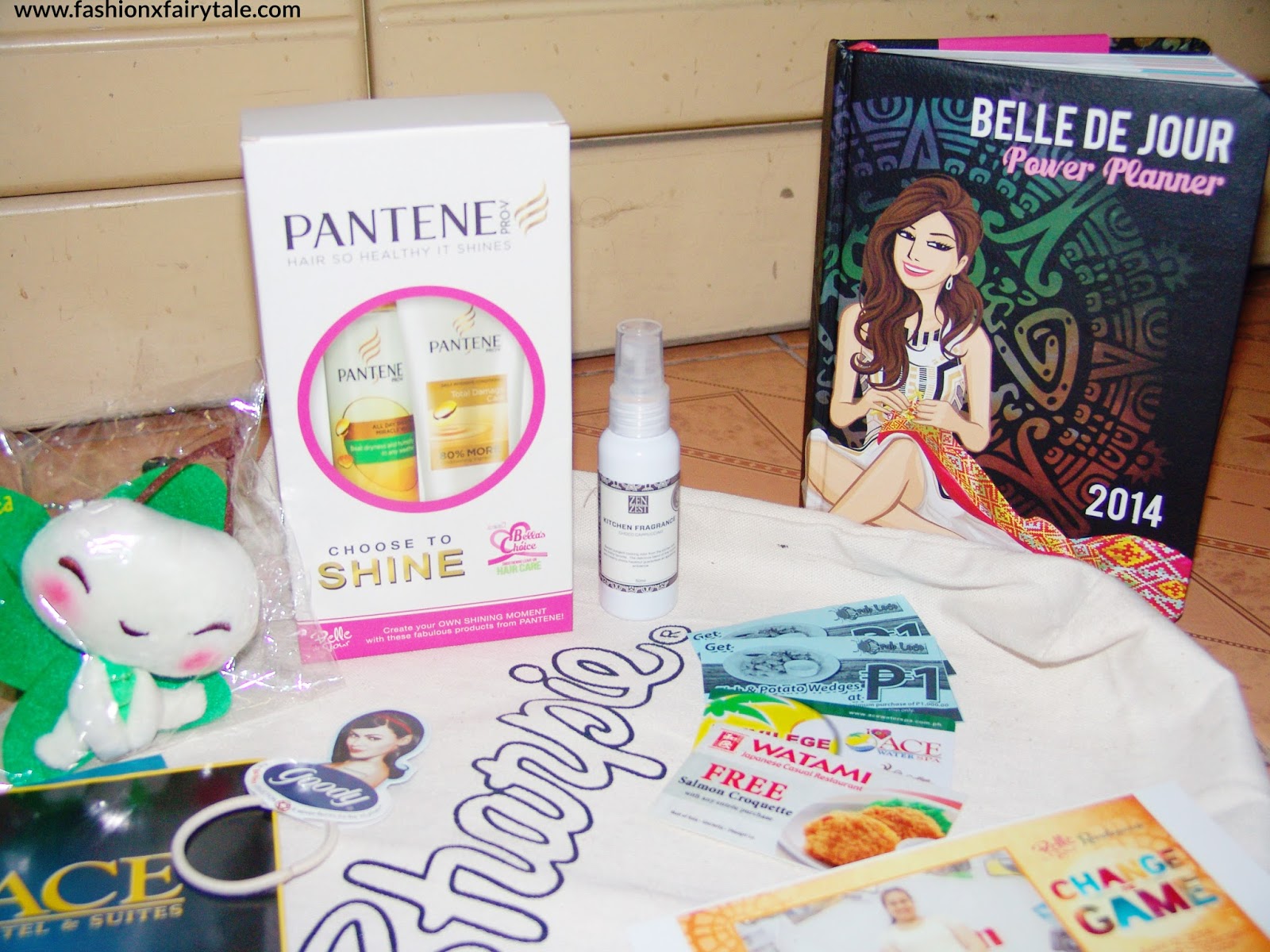 First thing is the 2014 Belle de Jour Planner which I bought a few weeks before the event. It did not come with the loot bag but I just wanted to show it. I really like the design and was require to take it so I brought it along with me. I’m in the process of doing the review so that will be up when it’s done. Here is the overview of the few things I got and it was in this cute Sharpie Tote Bag which has been really useful for me and I can hold all the beauty products of what I need to blog about so it is neat and organized but also keeps me from tempting to use it before I take pictures. (#bloggerproblems) 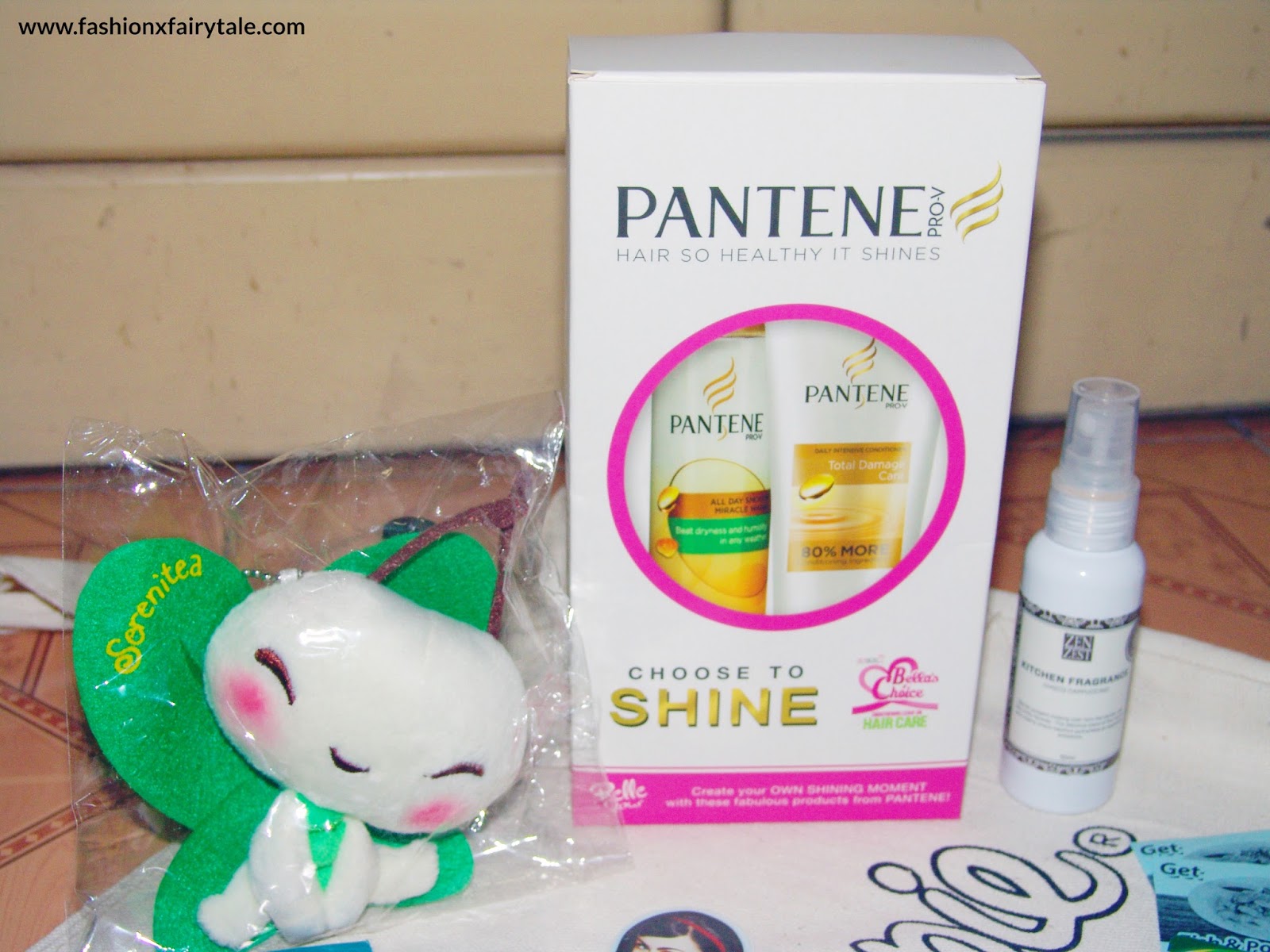 The first item I pulled out from the loot bag was this Pantene Hair Set which is going to be so useful for me and I cannot wait to use it. I like that it is a custom set that has the brands name on it and I love my hair products so this was probably one of my favorite things I received. The next thing was a Zen Zest Kitchen Fragrance which smells amazing because I think it s chocolate flavor or something sweet and yummy like that. It is used to spray the kitchen and to eliminate odors so I will either be using it or giving it to my mom I’m not really sure yet. That cute little Serenitea Stuffed Animal was not from the loot bag but the prize I won from the raffle they were having. 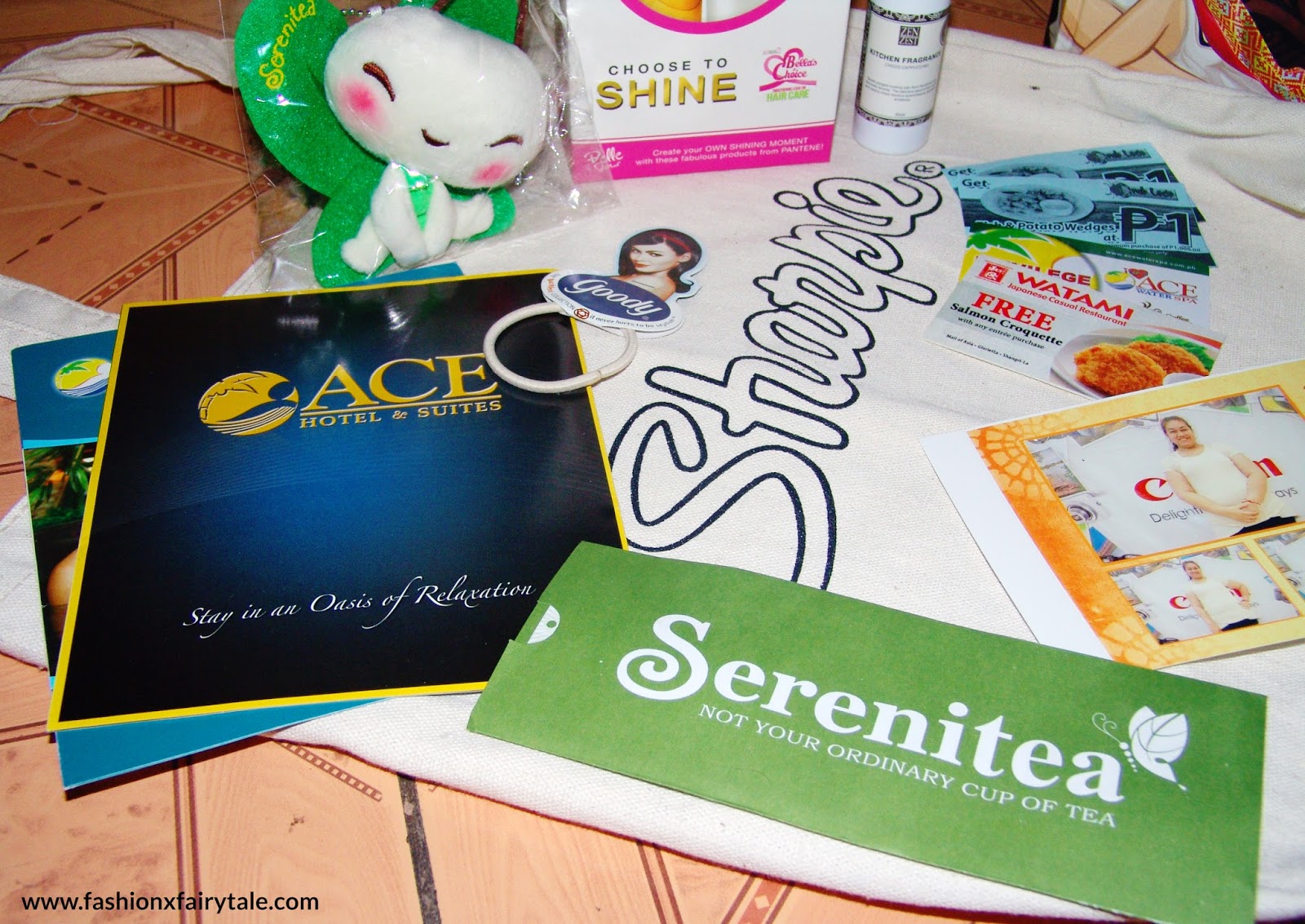 To continue I also won a Serenitea Gift Certificate which the stuff animal was included with. I am excited to use it as I heard the place was good and that I have been wanting to try the different tea’s that are popular here. The next thing I got was a Goody Hair Tie which I am always in need of to put my hair back and I always seem to lose one so this will come in handy. I also got a few pamphlets to different places to look at. 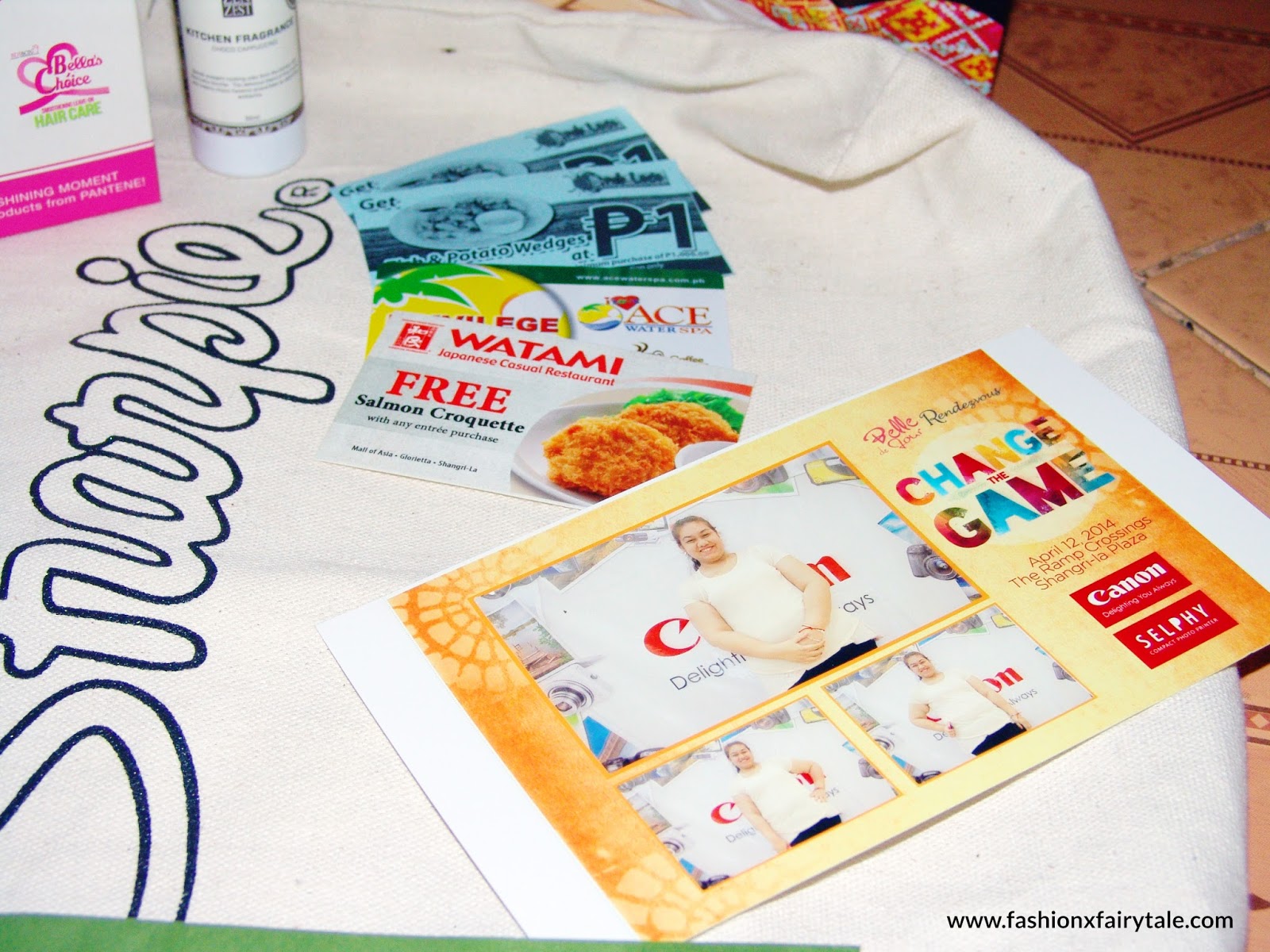 Here is the photo I took at the Canon photobooth during intermission and I liked how it turned out. This was the photo I always forget to include in the apost but I include it in the loot bag so that’s fine. I miss having my cousin Lynn with me as it makes it funner when the two of you take a picture together. With only one it was very lonely and not as exciting. It was a cute souvenir so I wanted to do it even though I was a little shy to. I’m glad that I am getting out of my comfort zone though and trying new things because I know back then I would have never have done that on my own. I also got a few coupons for restaurants too which was nice as I like going to new places to try them and taking my family.

I hope you liked what was in my loot bag of the Change the Game event and got excited with what I got as I was.

What was the most exciting gift certificate you’ve won?