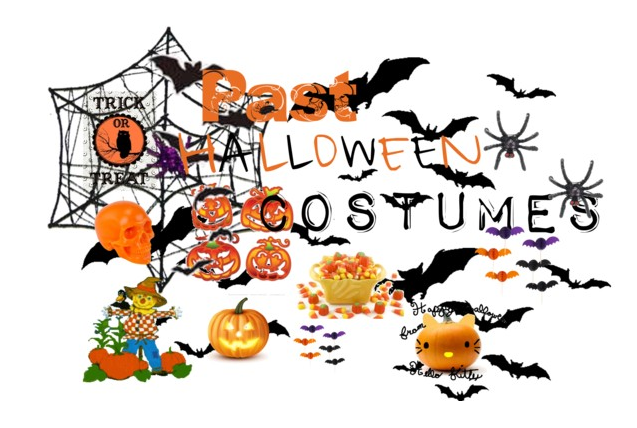 Yesterdays post was so fun I really wanted to do something like it again so I thought I would talk about my previous costumes! I really loved everything I wore except the pumpkin but the rest was all so cute.

The back story is my mom hated the color black and I could never wear it when I was a child. She was so superstitious so I didn’t get to wear that color. I didn’t even get to dress up as anything spooky like a vampire or a witch because she wouldn’t let me so all of my costumes were cute and bright and just not very haunted for the holiday.

Whenever I went to the Halloween Costume store it took me hours to find a costume and choose who I wanted to be. Now that I am older it seems easier and now I can make a costume for myself.

Let’s go through the years,

At the age of 2 was my first time my mom dressed me up. I don’t recall
going trick-or-treating but I have so many pictures of me wearing this
costume. That year I was a Barbie Fairy Princess and I even had a wand
and some wings and I think a crown. Even back then I loved crowns and
tiaras. It wasn’t quit like the picture but it was kind of like that.

At the age of 3 was when I started Ballet so naturally that year I was a ballerina. My parents even got me to pose for my whole family when they came over. I remember the tutu wasn’t that big but it was fairly poofy. My mom even did my hair pretty so it would match the costume.

Now at the age of 4 I entered tap class so that year our costume was a show girl and yes I did wear it and I loved it. I even had feathers on my head which was so awesome and I even had this poofy feather tail thing in the back and it swayed when I walked. This was my favorite thing to wear and I didn’t want to take it off. 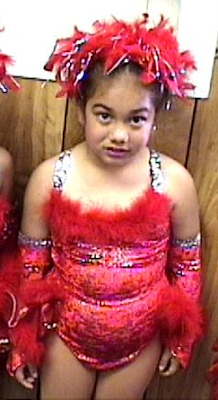 I was a really sexy 4 year old showing some skin and those legs. I can’t believe I wore this but it is still cute to me.

Okay now I skip to when I was in school and what grade I was in.

At the age of 5 was when I entered preschool and that was when I wore the Hello Kitty Princess costume I talked about in my Tag post yesterday. I am not going to talk about it much anymore.

In kindergarten I dressed up as a genie. I went with my mom’s friend and her kids that year so it was more fun. I even got to dance in my genie costume at the mall for a dance show with my dance studio so that was pretty fun to do. the picture is like the actually the same one I wore so it was convenient finding it. I think it is standard though.

On to first grade I was a pumpkin which I hated with a passion. I refused to go trick-or-treating that year because I hated it so much. I still went but in a different costume. I don’t know why I hated it but i just didn’t like it and it was too plain for me. I loved pumpkins but this was ugly.

On to 2nd grade. We got to have a Halloween Parade on campus since I switched schools and that year I was Dorothy from the Wizard of Oz. I just loved the shoes and I had bought the shoes way before the costume and I had to wear them since they were so cute. I enjoyed the costume but I thought it wasn’t that entertaining. 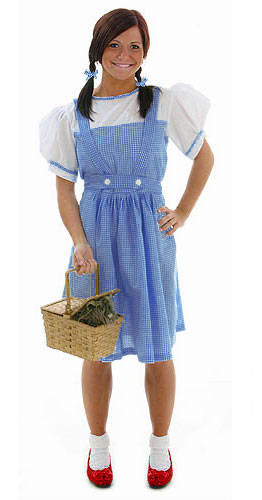 In 3rd grade I was 2 things. I wore my costume I used in a recital for dance which was a sexy genie and a cowgirl. My genie costume was really embarrassing because it exposed my stomach and was really itchy from the sequins. I won best costume though. I remember my mom yanking off my jacket before the parade to show my costume. It was really cold and I felt so exposed. I did the parade and later I changed into my cowgirl costume. I liked it more because of the hat and because of the boots.

My costume was very similar to this except it had pink and gold in it. It also wasn’t a bra like this it came down more and was like a sports bra and a short cami but it really was very reveling.

My cowgirl costume was just like this but it was red and white. I really liked it and I just loved the hat of mine. my mom even did my hair in braids to look like a real cowgirl.

This is wear it gets annoying. With me trying to accomplish my dream of being a cheerleader I wore it 3 years in a row. Of course every year I bought a new one but I had worn the same kind of costume so many times. I wore it from 4th to 6th grade. I kind of regret it now because I should of explored my options and been something else but I really enjoyed this costume! I didn’t really go trick-or-treating through these grades but i did go to my classroom parties and the school parties. In sixth grade I dint go out much I just stayed and gave away candy while I was in my costume. I did go to the neighbors though. 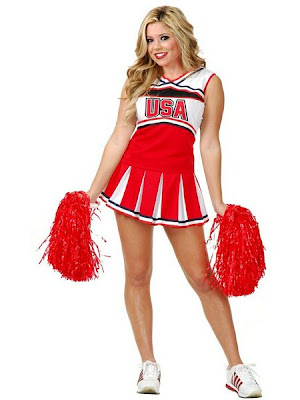 In 7th grade I finally realized I should be something else and since our dogs name is Angel well I decided to be an angel. My gown was so long and hot to be in that night. I loved the wings and the feathers on them but my halo kept falling, maybe it was telling me I wasn’t really an angel. I didn’t really enjoy this costume but I did love the wings. I actually found the same one I wore again. I went with my neighbor trick-or-treating and we got so much candy and I got home so late that it was past my bedtime. I had so much fun.

In 8th grade I wore the same dress but made it shorter and made the sleeves shorter so i was a sexy princess angel that year. I took of the wings and halo and added some heels and a tiara I bought. I just recycled the costume and so did my best friend. This was in my chit chat I did of my favorite Halloween memory.

In 9th grade was the last time I dressed up and went trick-or-treating. I was a fifties girl and it was another recital outfit. I thought it was so cute since it was my favorite color. I put my hair up and I put a long ribbon in  my hair to complete the costume. I didn’t go with my best friend because her grandmother was in the hospital but I did go through the neighborhood and got candy. The top is different on mine but it is the same skirt and the details on it.

And I stopped after that but this year I was planning on dressing up and as I said before I might be a sexy ballerina. I already posted some ideas but here they are again. 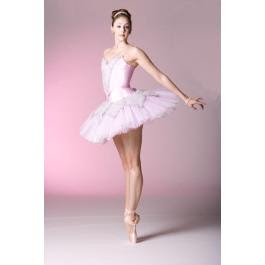 So that is it with my Halloween Costumes of the Past! Hope you enjoyed it.

What are you going to be for Halloween this year? Leave it in the comments!